Following the club’s fundraising efforts on Non-League Day, Margate FC were able to present a cheque of £1930 to the blood cancer charity, Anthony Nolan.

Thanks to this donation, the club has added 48 brand new donors to the charity’s register, any one of which could go on to to save someone’s life!

Anthony Nolan saves the lives of people with blood cancer, such as leukemia, by matching them to people willing to donate their bone marrow, or blood stem cells, for a lifesaving transplants.

It also carries out pioneering research to increase stem cell transplant success, and supports patients through their transplant journeys.

Lawrie Mallyon, senior community fundraising manager at Anthony Nolan, said: “We are so delighted that Margate FC chose to fundraise in aid of Anthony Nolan. Every penny raised will help us undertake lifesaving research, recruit more donors and provide vital support to patients and their families.

“Fundraising is a vital part of our lifesaving work – the more money we raise, the more potential donors we can recruit onto the stem cell register, giving people in desperate need a second chance of life.”

Kent County Council Transport delivered the Thanet bus changes consultation at St Peter’s Church Hall, Broadstairs on Thursday 29 November.  The event was attended by over 100 people, many of whom were members of the Thanet Over Fifties Forum (TOFFs) and had strong feelings about plans to alter the provision of bus services in Thanet.

Some people were heard to say: “We only found out about the meeting today via Facebook. Why?”

It is thought that the changes will impact on a lot of older people living near the bus routes that are in the plans, particularly at a time when loneliness and social isolation are being considered one of the greatest public health challenges of our time by the Prime Minister, who recently launched the Government’s first ever loneliness strategy – https://www.gov.uk/government/news/pm-launches-governments-first-loneliness-strategy

TOFFs members have been to all the bus consultations, from the Big Conversation to the Bus Summit.  People have listened to the proposals, they have submitted their concerns, they have signed petitions, but  assurances of Stagecoach not removing certain services could not be guaranteed.

One TOFFS member said: “The number 56 is such a valuable route.  It links people to so many needed facilities all the large supermarkets in Thanet, GP surgeries, Westwood Cross, libraries and more importantly QEQM Hospital.”

TOFFS raised its concerns with KCC, especially in light of the new Bethesda Medical Hub https://www.thanetccg.nhs.uk/about-us/integrating-health-and-social-care/improving-healthcare-in-thanet/  and that Thanet will not benefit from the new KCC’s Bus Summit Pilot Scheme https://www.kent.gov.uk/roads-and-travel/travelling-around-kent/big-conversation

TOFFS will continue to keep the bus changes on their agenda. 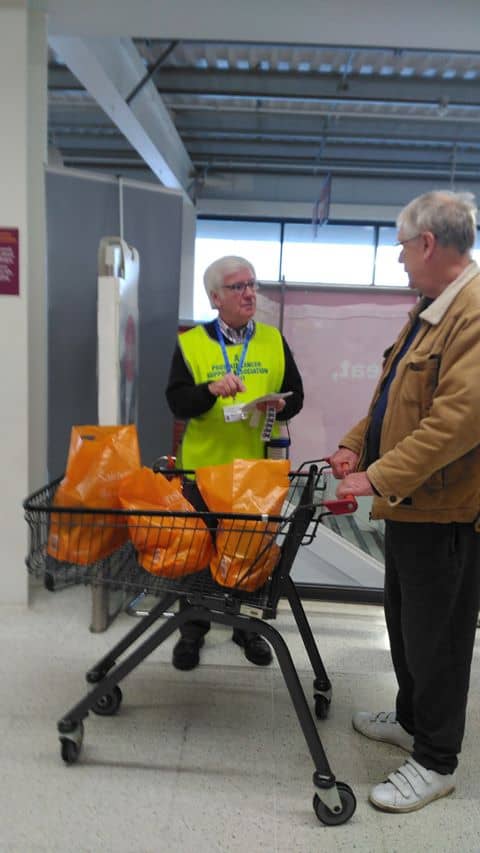 Prostate Cancer Support Association Kent have raised an amazing £2,548.30 so far as Sainsbury’s Thanet Westwood Cross Charity of the Year. 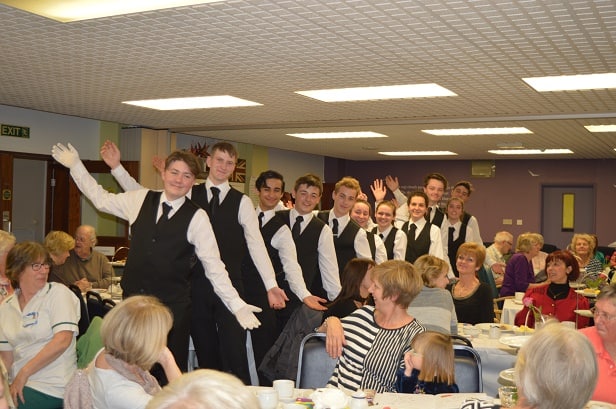 The students aged 16 – 18 years who are studying level 2 and 3 Catering and Hospitality arrived in chefs whites for cooking and black and whites for the front of house team.

Roger Phillips, Head of Catering for East Kent College, said: “The students take part in events within the community as part of their curriculum. Many of the group have only recently started their course in September and are progressing really well.

“The college is keen to offer trainees a diverse range of opportunities to broaden their skills and offer them opportunities to enhance their progress into employment. Training at Pilgrims’ hospice in Margate, is just one of the many ways we are helping our young people to engage with their community.”

The students prepared and cooked cakes, pastries and sandwiches; all beautifully presented and served.

Georgina Braithwaite, Head Chef for Pilgrims Hospice Thanet, said: “It’s lovely to have the support from our local community and not just with financial donations. The students had the opportunity to find out more about what happens here and discover we are much more than a hospice ward.

“I would like to thank Roger, his colleague Rob Allsworth and the students for offering us such a lovely treat.”

Ian Ashton, Head of Catering for Pilgrims Hospices, is working with Broadstairs college to identify opportunities to offer some work experience placements for students next year.

If you or someone you know is coping with a life limiting illness and you think you may benefit from Pilgrims’ support, talk to your GP or Healthcare Professional about the options or visit www.pilgrimshospices.org/wellbeing.

The Thanet Winter Shelter will remain open until March 2019. Over the last couple of years it has been a huge success in supporting both women and men who have found themselves sleeping rough in sometimes most dreadful weather conditions, it is safe to say the Winter Shelter does save lives.

Homelessness is an issue that can affect anyone of us at any time. We always consider that without considerable savings we can be just a few of months salary away from losing our homes regardless of rent or mortgage. Many reasons can be behind becoming homeless, breakdown in relationships, loss of employment, escaping domestic violence and mental illness are just some of the contributing factors. On top of this benefit cuts, rising rents and ever dwindling private sector properties are all leading to more and more people becoming homeless.

Regency Properties are teaming up with Thanet Safe Limited to help raise awareness and collect donated goods from local business from across the Isle for the Winter Shelter this year. Regency Properties 133 Northdown Road Cliftonville is acting as a collection point where you can drop off your valued donation. The following items will help those in most need:

Further items are requested on the Winter Shelter website however we only have limited space to store goods until they can be collected/passed on. 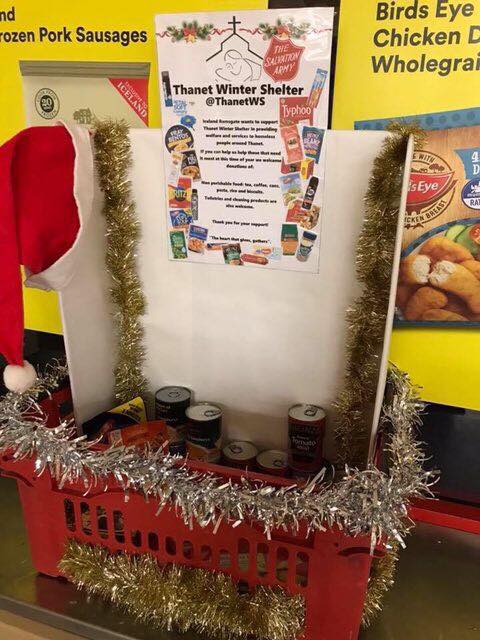 Iceland in Ramsgate is also collecting donations for the Thanet Winter Shelter and Salvation Army. The store will be taking donations for the month of December. People can donate non perishables, toiletries and warm clothing. It’s the second year the store has collected for the causes.

Thanet’s Camera Club members have been enthralled and entertained by recent guest speakers including James Pearce and his “light show”, followed by Gavin Hoey who gave a great insight into the science behind photography and how to get the best from post-processing.  Our own member Russ Miles gave an informative presentation about the life of the hare, emphasising the importance of safeguarding their remaining habitats in Kent.

Judge Paul Adams was given a difficult task commenting on our 2nd quarter PDI competition which attracted 41 entries in the intermediate group and 42 from the advanced group.  Terry Scales scored a hat trick (1st, 2nd and 3rd places) in the advanced group and Steve Hewitt won the intermediate group with his photograph entitled “Reach for the Sky”.  Next is our print competition on the theme of wildlife, to be judged by Glyn Bareham and on 10 December we look forward to a talk entitled “Coast 17” by Ken Scott.

The Club is very encouraged by the number of new members joining us and we look forward to welcoming more in 2019.

For full details of our programme, membership and other news please visit our website: www.isleofthanetphotographicsociety,co.uk 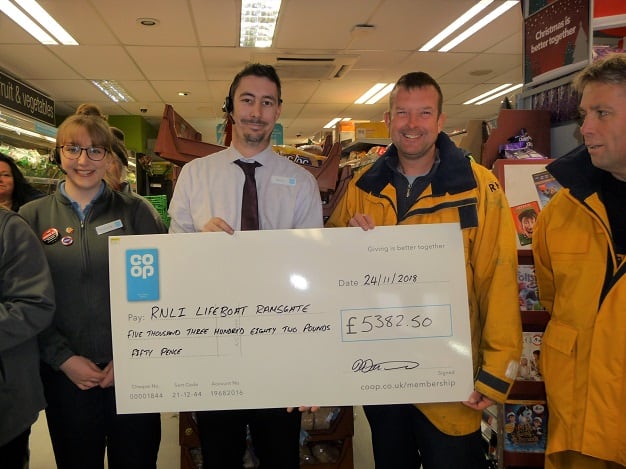 Last year Ramsgate RNLI fundraising team applied to be a charity on the Co-op Local Cause Scheme, they were accepted and linked with the Co-op Grange Road Store, Co-op Funeral Care & Co-op Petrol Store in Minster. As a member of the scheme the RNLI undertook to hold two information days at Grange Road and Minster.

A really good relationship was built over the year with the staff at the Grange Road Store, they supported us with raffle prizes for some of our fundraising events and one member of staff, Harrison, decided to run events for us as part of his role development.

Harrison took it upon himself to organise a raffle in aid of RNLI Ramsgate Lifeboat which started on September 25 and was drawn on November 10.

He also organised two collection days at the Grange Road Store in November and a cake stall for the final national payout day.

Members of Ramsgate RNLI crew, volunteer fundraising team and supporters were on hand for the presentation of a cheque to Coxswain Ian Cannon by store manager Darren and his team for the National Local Causes Scheme and then a further £515.38 was presented which was raised by the collection days, raffles and cake stall making a grand total of £5897.88.

This is a fabulous amount of money and Ramsgate RNLI would like to express their heartfelt thanks to everyone involved, customers, staff and supporters for their generosity.

Also, on November 24 we had a new arrival into Ramsgate, a Trent relief lifeboat 14-24 called “Dora Foster McDougall, The vessel has come to Ramsgate for maintenance work and will then be moved into the inner harbour and moored up on the heritage pontoon, and decorated with Christmas lights to brighten a dark area in the harbour for the Ramsgate Illuminations.