Three conspirators have been jailed for life after a series of botched murder plans.

On Wednesday 29 November 2017 their victim, Raymond Weatherall, was rushed to hospital after being shot in the face while he was in Sandwich Marina.

His wife Hayley Weatherall and her boyfriend Glenn Pollard, 49, and Pollard’s teenage daughter Heather have been jailed for the crime.

At their trial, Maidstone Crown Court was told the non-fatal shooting triggered a long and intricate Kent Police investigation, which uncovered a string of other unsuccessful attempts on the man’s life, planned before and after the shooting. These ranged from poisoning, burning and drowning.

The jury heard how on the day of the shooting firearms officers searched the riverbank in Sandwich and despite not finding a suspect or a weapon that day, enquiries continued and witnesses were sought.

It wasn’t until January 2018 that a member of the public came forward with suspicions that Glenn Pollard and Hayley Weatherall, 32, were involved. It was understood they had formed a relationship and for personal reasons wanted the victim dead. 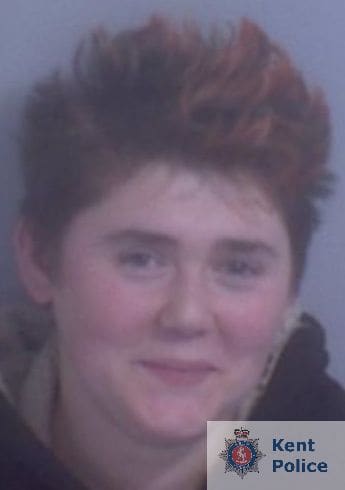 It was also alleged that Glenn Pollard had sought the help of his daughter Heather (pictured), now 20, and made plans with her to carry out the shooting.

These allegations were later supported by Heather’s absence from work that day. Her car was placed at the scene the day before the incident and during the shooting, and it was spotted being driven away within minutes of the attack.

Kent Police officers arrested the father and daughter on Sunday 28 January and their home in Church Lane, Stourmouth, was searched.

In addition to mobile phones, cameras and camouflaged clothing being seized, a number of registered firearms were discovered. One of which was a long-barrelled bolt action firearm with sight and suppressor attached. Experts believe this could have been responsible for the bullet which, due to pre-existing health reasons, is still wedged between the victim’s temple and jaw.

The phones and electrical devices were analysed and hundreds of messages were discovered between Glenn and Heather Pollard. They exchanged ideas about killing methods and aired concerns about keeping their messages a secret. Officers discovered a catalogue of web pages that had been viewed in search of ways to poison and kill their victim without being caught.

Their plans had continued after the shooting with the pair and Weatherall discussing other ways of killing the man, this included giving him sleeping pills and a lethal quantity of his own medication.

After gathering further evidence Glenn and Heather Pollard were arrested again on Wednesday 21 February and charged.

Detectives also arrested Weatherall from Ash on suspicion of being complicit in the murder plot and she was also charged in March.

The jury was also told about other events that had threatened the victim’s life between the summer of 2017 and the spring of 2018 – incidents the man had no cause to be suspicious of at the time.

These ordeals included a time in which he suffered serious burns when his wood burner exploded and a planned fishing trip with Glenn Pollard where Weatherall later revealed that Glenn planned to push him overboard. This plan was aborted due to the number of people around at the time.

The court also heard that a week before the shooting in Sandwich, there had been plans to shoot the victim when he was working on a farm in Rainham but that too was abandoned.

The jury decided these secret plans were enough to find the trio guilty of conspiracy to murder and on Tuesday 20 November 2018 they were jailed.

All three were given a life sentence with a minimum of 17 years for Glenn Pollard, 15 years for Heather Pollard and 15 years for Weatherall before they’ll be considered for parole.

Investigating officer, PC Paul Wilson, said: “This has been a very complex case and extremely difficult for the victim who is quite frankly lucky to be alive.

“He’s had to come to terms with the fact that three people close to him who he cared about were so intent on hurting him. They’ve also put him through further distress with a long and upsetting trial that has revealed all the despicable actions of these three individuals.

“There is no doubt that Glenn, Heather and Hayley have taken great steps to end this man’s life and we can only be thankful they weren’t successful.

“We hope the victim will now be able to move on with his life where he’ll no longer be put in harm’s way. We also hope our investigation and the subsequent conviction has given him and others the confidence that Kent Police will leave no stone unturned in order to seek justice.”