New signs targeting anti-social behaviour have been installed across Thanet.

Five designs have been created for the signs which highlight the Public Space Protection Orders which were agreed by Thanet council Cabinet members in August.

The PSPOs  were approved by councillors following hundreds of complaints and enforcement action against people spitting, urinating and defecating in public areas as well as jumping between buildings.

The signs cover a range of acts, from campervan parking in restricted areas to spitting and urinating in public.

One sign also shows a tent which has raised criticism on social media that the council is targeting people who are rough sleeping.

Thanet council says this is not the case and the signs are aimed at ‘ninja camping’ where people pitch up tents overnight on public land for recreational use.

A council spokesperson said: “Signs which include a picture of a tent are aimed specifically at people who choose to camp overnight on beaches or public land and crucially, who cause disruptive behaviour – often referred to as ninja camping.

“Council officers or police who come across people who are homeless, and/or living in tents and not committing anti-social behaviour will be referred to the council’s RISE multi-agency team who support rough sleepers in the district. Anyone who commits anti-social behaviour – in particular those using drugs on our beaches, or in our parks and open spaces will face enforcement action.” 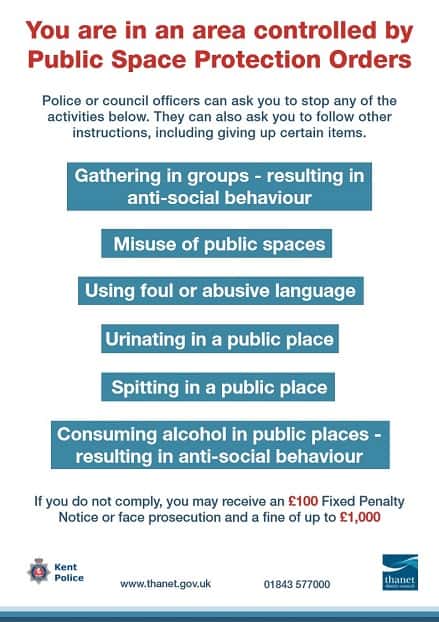 The signs have been installed in areas according to the frequency of anti-social behaviour reports to both police and the council’s Community Safety Team who deal with issues such as drinking alcohol, using abusive or foul language, urinating or spitting in public.

The council spokesperson added: “The new signs provide information to the public that if any of this behaviour is witnessed by police or council officers, they will risk being issued with a Fixed Penalty Notice for £100 if they fail to adhere to warnings.”

What the PSPO covers: