The other day, I was talking to a young woman in Northwood. The good news was she had a job. The bad news was it was on a zero-hours contract and the cost of travelling to her place of work was almost as much as she was being paid to do it.

This is a prime example of how the figures seem to say unemployment is going down and things are on the up – but reality tells a very different story.

A young person looking for a job today is much worse off than in the past – especially if they live in Thanet.

The national unemployment rate for young people aged 18-24 is 11.3% – far higher than for the working-age population as a whole (4%).

And when young people do find work, they tend to be paid a lower rate.

Young people on benefits are also the most likely to end up being sanctioned, 70% of sanctions so far imposed under the Universal Credit live service have been on people under 30.

This strongly suggests that sanctions don’t work when it comes to getting young people into employment.

Austerity has hit the younger generation harder than anyone. It’s a huge struggle to get a reasonably paid job, expensive to rent somewhere to live and, of course, nigh impossible to buy a place.

And those young people looking to improve their chances by continuing their education will too often find themselves in a swamp of loans, overdrafts and credit cards.

The government has no plans to address these challenges. They are failing young people across the country.

A recent jobs fair, hosted by Thanet’s two Conservative MPs, was attended by 1,000 people keen to find work. But those same MPs were mystified that local employers had struggled to find suitable candidates to fill the jobs and apprenticeships on offer.

The root of the problem is that we have an education and training gap in Thanet that needs tackling head-on.

The National Education Service proposed by the Labour Party will offer cradle-to-grave learning that’s free at the point of use.

Labour has also pledged to raise the minimum wage to the level of a proper living wage (at least £10 per hour) for all workers aged 18 or over.

More specifically for Thanet, the local Labour Party is embarking on a series of conversations about how we can kick-start the local economy. 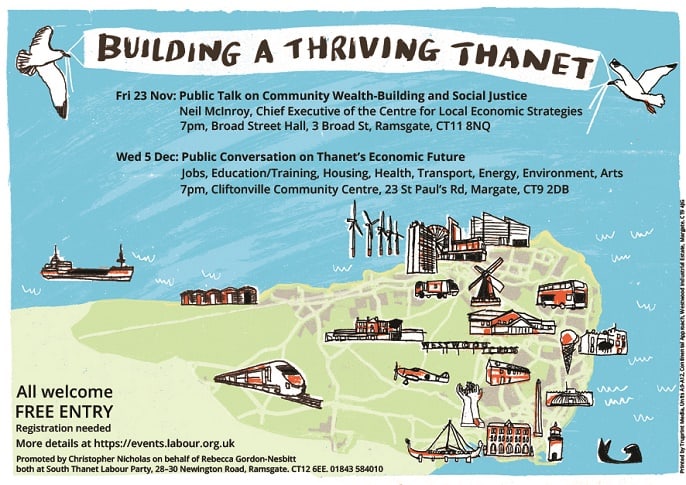 At 7pm on Friday 23 November, we’ll host Neil McInroy, Director of the Centre for Local Economic Strategies, who’ll introduce the work he’s been doing around the country to build local wealth. To book a place, click here.

At the same times on Wednesday 5 December, we’ll follow this with a public conversation about Thanet’s economic future, covering all aspects of our society including jobs, education and training, housing, transport, food, energy, the environment and the arts. To make your views heard, click here.

If you have ideas to contribute, please come along. Let’s make this a grassroots revolution.