Remembrance is a form of honour. We remember because we love.  And the more we cherish a memory, the stronger it becomes.

I left Thanet this week, bravely traversing the Wantsum channel in pursuit of remembrance. I washed up in Swale to see a Yorkshire inspired, Lancastrian poet currently residing in Medway, who uses every natural element, light and shade, sound and stillness, lingering within those diverse spaces, to remember, and to forget. To remember peace, to forget pain. Geography stirs memory, and thereby recalls love, heals loss.

Matt Chamberlain is an award winning poet who has published seven titles. His most recent book, I remember the Green Gaze, seeks out nature and landscape as an antidote to a brutal year. Turning suffering into beauty is quite the alchemy, and here, simply, stoically, he accomplishes it.

We make sense of the world and give meaning to our pain by expressing it. We fight to find meaning in our suffering, yet where the suffering seems so immense, so senseless, we become unequal to the fight. Words cannot help.

Instead, Chamberlain suggests, we should seek out something beyond words, something too often inaccessible when consciously sought. We must find it instead through the senses, bypassing the busy brain, tapping into something vaster, more primitive.

There is a breath-taking musicality about his work, a brutal, discordant, often conflicted rhythm, which echoes nature in its incessant repetitive beat. He plunders his childhood for comfort, the landscape he knew, and chooses sounds rather than words to conjure images, sounds rich enough to stir, linger, disturb, and ultimately, nourish. There’s a transformative, hypnotic sensuality about his work. A mellowness and a transparency, illuminating and healing.

He is not the first poet to utilise nature where art and reason fails; nor to reach for a pen to make sense of suffering and loss. Comparisons with Wordsworth and Tennyson are inevitable, and warranted. But Chamberlain is comparatively new to poetry, finding it in his late 30s, and doesn’t mention any long dead men when he discusses his work, preferring instead to champion and emulate local, contemporary poets, Broadstairs’ own Mark Holihan earning his particular admiration. 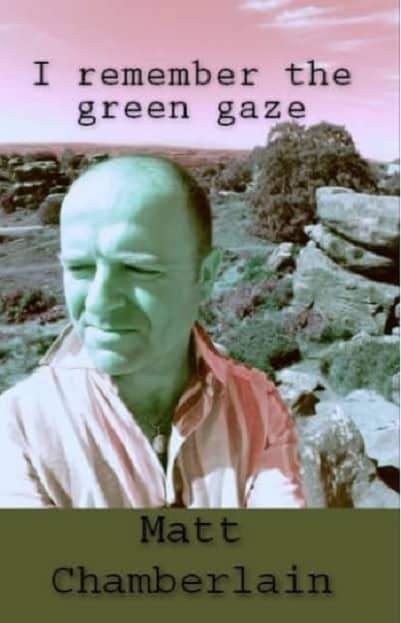 Chamberlain’s poetry is natural in him, inevitable, akin to the rocks that make up the Pennines, at which he wonders in the book’s final piece, Green Gaze. Determined, detached, doing their thing, creating beauty and wonder with an eerie indifference to their effect.

Watching him perform is exhausting. You’re forced to feel everything he’s endured over this past year, every outrage, every loss, then join him in his recovery, in a matter of minutes. The candour and energy he brings to the stage leaves his audience giddy.

And heaven help me, I will be performing two of his poems for Remembrance Sunday at York Street Methodist Church in Broadstairs, 3pm on November 11. I’m terrified, of course. But I’m certain his words can work their magic despite me.

I Remember the Green Gaze by Matt Chamberlain is available on Amazon and in local bookshops, priced £8.