Wanderers produced a fine team performance to score six tries without reply and move clear of the relegation zone.

There were only two changes in Wanderers starting XV compared to last week. Marius Thompson was on international duty with Norway and was replaced at full back by Sam Rolfe. Second team captain Stewart Box played at inside centre replacing Stuart Plumridge who was working.

Thanet had the advantage of the slope and the strong cold, northerly wind as the visitors kicked off.  Tight head Kamil Wiecaszek stopped an H&W early attack with a big tackle and Wanderers were soon in the opposition half thanks to a Charlie Knight catch and counter attack. Impatience and two penalties slowed Wanderers’ early momentum but on five minutes they went 5-0 ahead.

Box rounded off a controlled flowing movement that was founded by lock forward Arek Janeczko whose initial attack was held up just short of the line. Dan Hill’s conversion attempt was wide. After a quarter of an hour a penalty took Thanet into the corner. A rolling maul was halted but a further push ended with a nice show and go from Dave Lemon who touched down his first try of the season, Hill made it 12-0.

Andy Letts caught the restart well and tore back into H&W territory. Wanderers were soon again threatening H&W’s line and scrum half Tom Walton picked his way through a crowd of players to touch down and leave a difficult conversion that Hill converted brilliantly. H&W now enjoyed a good spell and Thanet did well to contain a rolling maul before Box was shown yellow for a deliberate knock on. Adam Gaddes marshalled the depleted side well and led the defence by fine example. Sam Taylor at open-side covered acres plugging holes and launching counter attacks. Arek received a knock and had to be withdraw with Kieran Wright replacing him.

With around five minutes of the half remaining Wanderers secured their try bonus point. A penalty to the 22 set the attacking position and a pleasingly patient build up was finished off with great determination by fly half Nick Herbert. Hill’s conversion gave a 26-0 lead at the interval.

Hill ran a good line to open up the defence before Reece Hougham continued and it needed some good defence from H&W to keep him out. Minutes later Hill again burst through before knocking over the penalty after the visitors infringed.

The game was being played at pace and Thanet again opted for the penalty opportunity after twelve second half minutes. Hill watched the breeze hold his kick up before it crept over the bar for a 32-0 lead. Club chairman and loose head prop Danny Clement and his Vice Chair Andy Letts  carved through the opposition defence but H&W continued to attack at every opportunity. 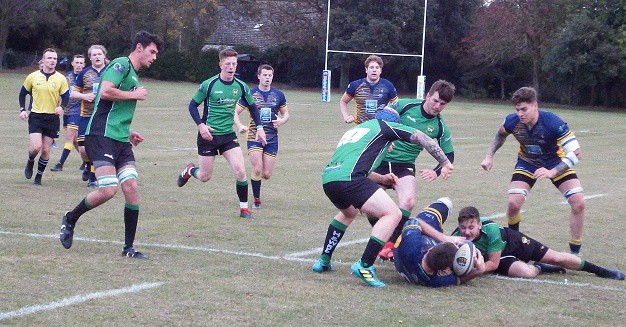 Eighteen-year-old Torran Rodgers left the bench for his first team debut to replace Clement. He has graduated through the junior ranks and earned his chance after working hard in training and in the 2nd XV. Kieran Wright sustained  a nasty leg injury. Fears of a further fracture have happily proved incorrect but a sprain will keep him sidelined for a while. As treatment continued, with seventeen minutes remaining, referee Billy Huntley decided to move the game to the neighbouring second XV pitch. Wanderers adjusted quickly and two minutes later Walton notched his double.

Again Arek’s strong break set the attack before, from twenty five metres, Walton sped through the tiring defence to make it 37-0. H&F were marched back ten metres after contesting a decision. Tom Longdon was on from the bench at full back and cleared up well to keep play in the opposition half. Neil Wakefield capped a superlative performance with one final bone crunching tackle. H&W’s disappointing afternoon worsened as their scrum half saw yellow. As the referee indicated the last play Arek once more burst away from near half way and when stopped got up to rejoin and finish off the move and claim  a well deserved third try of the season.

Hill crowned a very good afternoon for him with a neat conversion that brought him fourteen points for the match. Thanks to the good crowd of supporters who attended and who now hurried back to the warmth of the clubhouse; well pleased with the 44-0 result.

Head Coach Mike Pond was delighted with the first win of the campaign and with the style that his side played with. Fitness was again key and this was personified by his choice of Man of the Match. Kamil Wiecaszek was excellent from the first whistle to the last and gave a strong performance in the testing tighthead prop position.

On Saturday, November 3, the first XV travel to play old rivals Deal and Betteshanger in the most local derby of the season. Deal are ninth in the league with Wanderers now tenth. A good contest is in prospect so please support. The Deal second and third XVs are due to travel to St Peters to take on their Thanet counterparts. All games will kick off at 2.30pm.