A Ramsgate church which has a growing number of homeless people camping within its grounds says work is being done to try and find accommodation for the group.

Initially one man was sleeping in St George’s churchyard but now there are around six tents and nearby residents say there is a problem with a large group gathering at the site, drinking, taking drugs and intimidating people.

One neighbour said: “There was one homeless man who was given permission to stay a couple of days and he even put a little bit of money in the church funds.  He has been there three or four months now.

“But now there seems to be a large group that have moved from the high street to the churchyard and there are parties with drinking and drugs. The police and the council say it is private ground but the church warden is in her 90s so she can’t do anything about it.”

Thanet council’s homelessness team, RISE, has visited the site along with PCSOs and staff from the Thanet Community Safety team. 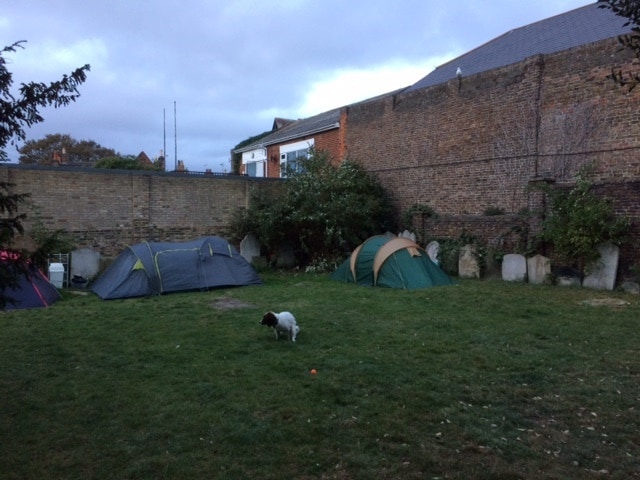 A council spokesperson said: “We are aware that there is a group of people camping in the grounds of St George’s Church but have not received any specific reports of Anti-Social Behaviour.

“Churchyards are private land and not under the ownership or control of Thanet District Council. The council’s community safety team and local PCSOs have visited the location along with  the multi-agency RISE team, which is dedicated to helping people in the district who are rough sleeping.”

The church says it is ‘deeply concerned’ about people being on the street in Thanet, especially now the winter is here.

A spokesperson said: “St George’s aims to be a welcoming and safe place for all who come through our gates. For while, we have provided a relatively safe haven for a small number of rough sleepers who have been camping in our churchyard.

“This was only ever intended to be a temporary measure and we are aware that there have been a number of problems with the behaviour of individuals. We take this matter very seriously and are working with Thanet council and police to ensure rehousing of those camping in St George’s Churchyard.

“We are grateful for the public’s support in this process. We are deeply concerned about the problem of homelessness in our area – rehousing people swiftly and safely is crucial, especially as the winter months continue.”

The problem is not restricted to St George’s with reports of people sleeping in Pierremont Park, Broadstairs and on beaches in Margate and Westgate as well as others sleeping rough without tents across the district.

Many residents have been so concerned that they have launched their own appeals to get tents, clothing and food for those that need it.

Sleeping on the streets in Thanet

According to Thanet council leader Bob Bayford data from October 3 (2018) showed 40 people reported as sleeping rough in Thanet. These figures come from head counts at certain points in the year meaning the true number could be much higher.

The aim of the scheme, which was launched on October 10 to coincide with World Homelessness Day, is for those in need to get support and help as quickly as possible, taking away the time spent making contact and referrals to other organisations. It also considers the way rough sleepers access support – which can often be too overwhelming if services are offered from different places.

The Thanet Winter Shelter project, run by Thanet council, Ramsgate Salvation Army and Aspire with DWP and Porchlight, is due to open at the end of November and run until mid-March.

The project will be in its third year and involves church halls in Margate and Ramsgate opening their doors to those sleeping on the street to offer a bed, clothes and food.

A key aim is to better equip guests to help them secure and retain longer-term accommodation and to provide practical pathways for training and employment. Unique to Thanet’s Winter Shelter is engaging with Kent’s Mental Health practitioners to ensure guests are referred to the most appropriate primary care/charity sector services for their needs.

Find out more about the winter shelter here