Broadstairs Surf Life Saving Club had a successful trip to Norfolk at the end of the summer season bringing home medals of every colour from the inaugural Surf Lifesaving GB Eastern Regional competition.

Our first ever nippers team kicked off the action on the beach at Sea Palling. We were the smallest team by far (in numbers not height) but our young clubbies took part in the board race, board rescue, beach sprints, beach flags and the team relay. Hannah had an amazing competition picking up silver in the girls’ board race and gold in the girls’ beach sprints, then teaming up with brother Joe to bring home bronze in the board rescue.

The afternoon saw the senior teams in action competing in individual board races, beach flags, beach sprints and a run-swim run as well as a team board rescue, mixed ocean relay (board, swim, run) and team beach sprints.  The afternoon got off to a dramatic start with Matt bringing the team to a photo finish for third place in the mixed relay then injuring himself in the beach sprints and having to pull out early from the beach flags. Jonno brought home two individual gold medals in his first outing for Broadstairs leading the pack in both the mens run-swim-run and the board race. Jonno and Dave then teamed up to take another gold in the board rescue. A  great day of competition was finished off with a fourth gold medal as Clare joined Dave and Jonno for the mixed ocean relay.

The club will now be focusing on some land-based fitness training and maintaining and developing our First Aid skills over the winter with beach sessions resuming in Spring as we prepare for another summer of competitions. 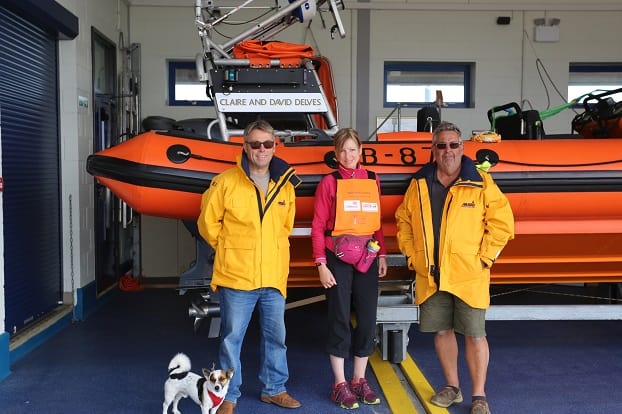 On Friday (October 19) Ramsgate RNLI station was visited by Beth Wickes who has taken two years off to walk around the coastline of Britain, visiting every lifeboat station.

This extraordinary lady decided in her mid-40s to completely change her life. She enrolled herself into Worcester University studying a degree in Human Nutrition and when she left aged 50, decided that she would take a couple of years out before starting work.

However instead of heading off abroad for her gap years, she decided to sell her home, put all her possessions, other than those needed for her journey, into storage and, after six months of training, set off from London Bridge RNLI station on  October 3 to walk around the coastline of Britain, raising money jointly for the RNLI and the Lowland Rescue.

With no support team, no physiotherapists and relying on the generosity of contacts within the Search and Rescue teams to put her up for the night, or funding bed and breakfast accommodation herself, she has set herself a stiff challenge.

Ramsgate RNLI fundraising team and some of the crew were at Ramsgate RNLI station in force to meet her and wish her well as she started off on the next leg of her journey walking from Ramsgate to Deal, as she is hoping to average about 12 miles a day and complete her journey in two years. You can follow her travels on bethfootforward.co.uk as well as her twitter and Facebook pages, but if you see her out and about wearing her distinctive vest go and say hello to her!

Thanet’s Camera Club held its annual exhibition at the York Street Gallery in Ramsgate from October 3-10, with over 50 photographs showcasing the talents of club members.  We hope visitors enjoyed this and are encouraged to come and join the club.

Our season is well underway.  In September Dave Mason gave us a fascinating talk about street photography and how to capture those unique moments of everyday life.  Club member Cherry Larcombe gave us an in-depth insight into the distinctions awarded by different photographic organisations and explained her personal achievements, with some great images too.

The first print competition of the season attracted 58 entries (18 in group 2 and 40 in the advanced group).  Our judge, Darren Woolway, was given a difficult task as the subject matter was very diverse, from architecture and animals to windswept landscapes.  He gave a brilliant critique of each print.  Winner of group 2 was John Sammonds with “Symmetry”, whilst Laura Drury won the advanced group with “The Prodigal Gosling”.  (Image attached)

Our next speaker is Gavin Hoey whose talk on  November 5 is intriguingly entitled “Lighten Up”.

For full details of our programme and membership please visit our website: www.isleofthanetphotographicsociety,co.uk

IWG release their third anthology publication, Yellow on Saturday, November 24 at the Old Kent Market, Margate, 10.30am to 2pm.

This writing group is going from strength to strength with three publications under their belt in the space of two years. Like their previous works, each story or poem in the anthology is an original work and has been written by a member of this successful Thanet-based group.

The key to each book and the concept that unites the pieces within it, is that every work has to include a specific colour. This time the colour is yellow. In earlier publications the colours were Red and Orange. If you’ve spotted the developing theme, you can probably guess that Green will be their next planned publication.

The launch is free, and everyone is welcome. You can meet some of the authors, view their other work and obtain an original signed copy. The Yellow Anthology is available for purchase on the day at the very reasonable price of £5. If you’re keen to join us with our theme and start an interesting collection for your bookshelf, both Red and Orange will be on sale too. Yellow, like Red & Orange, will be available on Kindle, i-Books and other eBook platforms in the near future.

Inspirations Writers group meets on the fourth Saturday of every month at Westgate library. All writers are welcome.

Founded ten years ago by local author, Carol Salter, to be a source of inspiration and support to local writers, its aim is to cheer successes, offer insights and information and give honest feedback to help individuals reach their writing potential.

IWG is a member of The National Association of Writers Groups. Further information about the group can be found at: https://inspirationswritersgroup.weebly.com/ 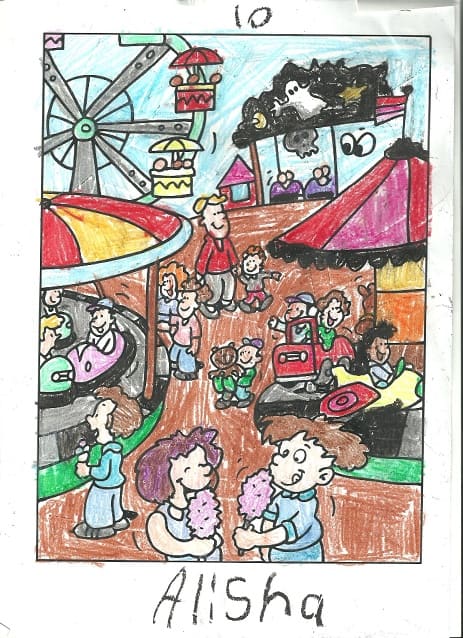 Budding artist Alisha Wallace’s picture has been picked as the winning entry in the Dreamland Trust’s first colouring competition.

Ten year old Alesha, from Ramsgate, entered the competition in September when she visited the Trust’s ‘Step back in time’ exhibition. Her prize, tickets to Dreamland’s ‘Get Spooked’ half term event were sponsored by Dreamland. The children’s Halloween event opens this weekend and is on for the Wednesday, Thursday and Friday of half term week.

Alisha, who attends Ramsgate Arts Primary School, said: “I am so excited and can’t wait to go to ‘Get Spooked’ at the weekend.”

Bernie Morgan, Chair of the Dreamland Trust, said: “Congratulations to Alisha. We had some wonderful, very colourful entries to the competition and all the children put a lot of effort into their colouring. The exhibition is open to people of all ages but we realised that young children might like something to do while their parents were looking at the pictures and films.”

The Dreamland Trust is an independent registered charity. Its exhibition ‘Step Back in Time’ features photographs dating back to the early 1900s, films from the park in the 70’s and 80’s and the opportunity to see some of the Trust’s digital archives. It is open weekends between 11am – 5pm and will also be open on Wednesday, Thursday and Friday of half term week between 11am – 3pm.

You can find more information about the Dreamland Trust at http://www.dreamlandtrust.org.uk/Home 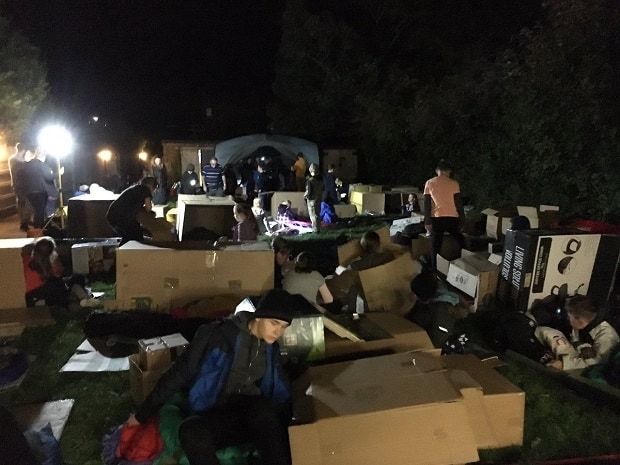 On October 12, Kent Scouts held the county’s largest ever sponsored sleep out in aid of Porchlight, Kent’s homelessness charity.

The event was held at 1st St Lawrence Scout HQ, at the rear of 3 Nethercourt Farm Road in Ramsgate and local MP, Craig Mackinlay, attended to offer his support.

The Scouts expected to raise over £125,000 for Porchlight with up to 3,000 Cubs, Scouts and Explorers taking part in the event, not just in the South Thanet constituency, but around Kent.

In 2016/17 Porchlight found accommodation for 84% of the 707 rough sleepers they found in Kent, giving them a new start in life. The biggest demographic rise was in young people, aged 18-24. 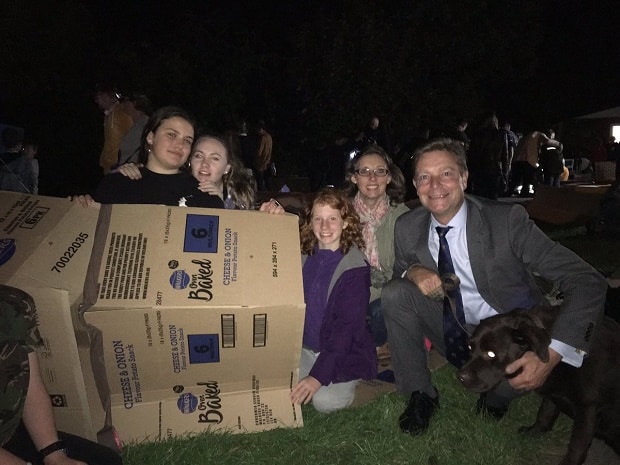 Mr Mackinlay said: “ “Just one person without a roof over their head in Thanet is one too many, and it is vitally important that the most vulnerable people in society, including homeless people and rough sleepers, are helped to get their lives back on track.

“That’s why it was great to see our local Cubs, Scouts and Explorers raising funds for Porchlight, a charity that plays such a crucial role in supporting the homeless, and tackling homelessness, in Kent.

“Our Scouts have supported Porchlight for years and I was very keen to assist their latest fund-raising initiative.”