A display of art that is deemed illegal in Japan is on show in Margate in an exhibition which features artists including the son of Great Train robber Bruce Reynolds.

Nick Reynolds and Edward Rose (pictured below) are showing the controversial work at the Arthouse Gallery, 6 Eaton Hill, alongside Margate artist Jay Reichsteiner, The display is curated by gallery owner Alyson Hunter. 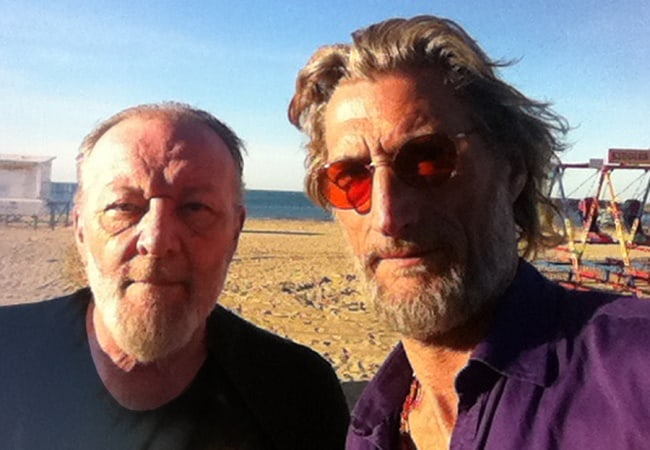 Reynolds is no stranger to controversy having spent his early childhood years on the run with his father Bruce Reynolds, the architect of the Great Train Robbery -a £2.6 million heist from a Royal Mail train heading from Glasgow to London in 1963.

Bruce Reynolds and his family spent five years on the run after the robbery, which was carried out by a gang of 15 including Ronnie Biggs. The family lived in Mexico, Canada, the South of France and then in Torquay. Bruce was eventually arrested in 1968, when Nick was seven.

Nick said: “I didn’t know he was on the run- if anything I thought he was a secret agent or something and I only realised that things were not quite right when he was arrested.

“We were very close, we’d spent more time together living an amazing lifestyle’ [whilst evading the authorities ] than most fathers ever get spend with their children at that age. But ultimately there was a heavy price to pay, ten years in prison. Despite this he still managed to be a really good loving father and made sure I had no desires to follow in his footsteps!

“Ramsgate was one of the first places we visited when he came out of prison in 1977. We were visiting a family friend called Mary Manson who was hosting  a party for him. She lived there, and had been arrested the time of the robbery for her minor involvement.

“I particularly remember the drive home as my dad had broken a tooth on a pork scratching and broke one of the lenses in his glasses so he had to drive back to London  hung over with tooth ache and one eye closed!”

Nick, who went to boarding school after his father’s arrest, later served in the Falklands war as a Royal Navy diver and electronic weapons engineer. He is also a member of the band Alabama 3, responsible for The Sopranos theme tune, and is the UK’s foremost creator of Death Masks.

In 1999, for his debut exhibition Cons to Icons, Reynolds cast the heads of 9 of the UK’s most infamous criminals in order to explore the paradox of how people vilified by the media can still be feted on the celebrity circuit.

In 2007 Reynolds travelled to the US with artist Carrie Reichardt and created a death mask of prisoner John Jo Amador – believed to be innocent- after he was executed after being on death row for 12 years. The cast was part of an exhibition entitled “402” as a protest against the death penalty and was exhibited as part of the show Disobedient Objects at the V and A.

In 2011 Reynolds and Reichardt were commissioned to design a horse for the Cheltenham Horse Parade. The sculpture, entitled, Dada, the Trojan Horse was vandalised and caused controversy at the Cheltenham Gold Cup.

Later that year, Liverpool Discovers, commissioned the pair for a sculpture, entitled Social Justice & Radicals – Mary Bamber – A Revolutionary Woman. The mosaic figure of suffragette and social revolutionary Mary Bamber stood outside of Liverpool’s iconic St Georges Hall as a tribute to all women who fought for their right to vote and is now in the Liverpool Museum .

In 2015 he produced a sculpture entitled “For Pete’s sake” of the musician Peter Doherty on a cross. The piece was exhibited at St Marylebone’s Church.

In 2018 Reynolds took part in the Saatchi exhibition “The Art of Defaced Banknotes-Cash is King.

The Eaton Hill exhibition opens next Friday (October 19) with a launch party from 6pm-9pm. The gallery is then open 10am to 5pm Monday to Saturday. The exhibition runs for 3 weeks and is only for those aged 18 and over.