Kent Police is appealing for witnesses after an outside gas meter was set alight in a Cliftonville alleyway causing families to be evacuated from flats in Arthur Road.

It has left a family at the building without hot water or heating although a new meter is now expected within the next two days.

Rhys Hopkin Evans, 24, pregnant partner Coral Redgate, 25, and their two-year-old daughter have been without  gas since the fire.

The meter was completely destroyed and the box needs replacing. At first Swale Heating couldn’t carry out the work until given the go ahead by landlord Town and Country. 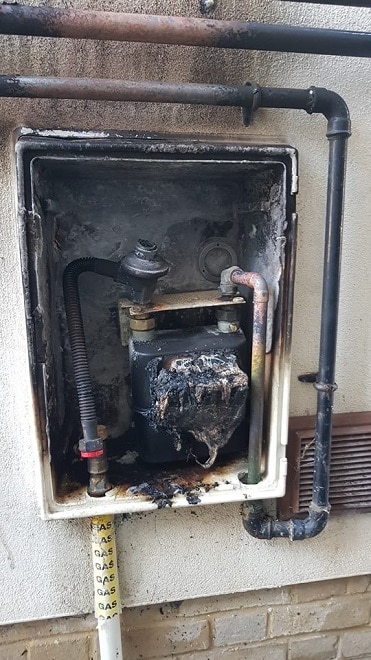 The family had been told it could take at least four weeks for the work to be done but Town and Country have now managed to move this forward.

A spokesman for the housing association said: “Our contractors and staff have been in continous contact with the residents since the incident was reported. Although it was reported SGN would take four weeks to install a new gas meter we have been able to move this forward and expect a new meter to be fitted in the next day or two.”

Kent Police is now appealing for witnesses to the incident.

A spokesman said: “Officers believe an external gas meter, situated in the alley in Arthur Road, was intentionally set alight between 8pm and 8.30pm on Wednesday 3 October 2018.

Police attended the scene to support Kent Fire and Rescue Service and to investigate the circumstances. Since the fire a number of enquiries have been carried out and now officers want to hear from any witnesses or anyone they haven’t already spoken to in the local area who might have information.”