Civic Voice, which hosts the awards to highlight the positive impact that conservation areas have had on the country since first being designated in 1967, has announced 18 areas that made the list out of 249 nominations.

Among the 18 is Dalby Conservation Area, made up of Dalby Square, Arthur and Dalby Roads in Cliftonville.

The winner will now be decided by the public.

To vote, visit http://www.bigconservationconversation.com and click the heart on the conservation area that you want to win. The vote will close on October 16 with the winner announced at the Civic Voice conference on October 19-20.

The conservation area with the most votes by the closing date will be awarded the accolade of England’s Favourite Conservation Area and the winners will be highlighted over the coming year for other areas to be inspired. An invitation to speak at an event in Parliament will also be offered to the winning conservation area.

Dalby Square was designated a Conservation Area in 2010. All properties were built in the 1870s with slightly smaller terraced houses in Arthur and Dalby Roads built in the 1880s and 90s. All have elaborate decorative detailing.

Projects funded by a £2.8m Townscape Heritage Initiative grant include the repurposing of a closed hotel built in 1895 (12 Arthur Road) back into a guest house,improved street lighting and reclaimed gardens.

Dalby Square is also the site of a multi-generational family living experiment at a Victorian five storey townhouse.

The project, in partnership with Thanet council and The University of Kent’s School of Architecture and School of Psychology, aims to tackle climate change, an ageing population and housing shortages through the renovation and conversion of the mid-terrace property.

12a Dalby Square is owned by Kent County Council and is part of the Townscape Heritage Initiative (THI) funded by the Heritage Lottery Fund and Thanet District Council.

The property has been restored by Lee Evans architects and taken from former subdivided hotel rooms to a home that can accommodate up to 12 people living as a family. 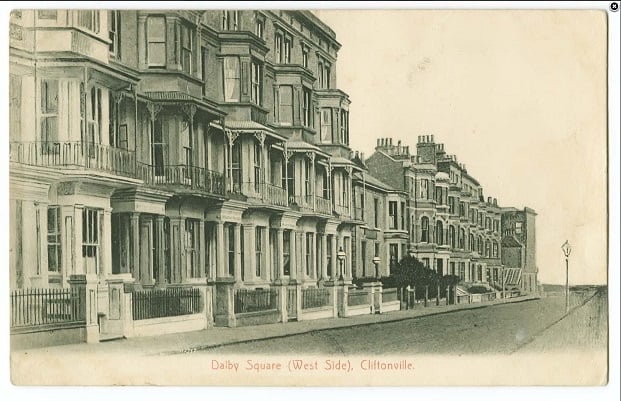 It has seven bedrooms, three kitchens, three bathrooms, three living rooms and a private garden. There are period features and fittings throughout, views onto the communal gardens and on-street parking.

Laura Sandys Civic Voice Vice-president said: “With 249 conservation areas being nominated, it shows that people are proud of where they live. The shortlist comprises conservation areas that have been revived through community leadership, through to areas which has been revitalised through financial support from the Heritage Lottery Fund.