The non availability of both regular scrum halves saw a first start of the season for Callum Doody and with Marius Thompson on duty with the Norway squad Ryan Copp, after a couple of seasons with Maidstone, was back in the ten shirt.

Stuart Plumridge, Sam Rolfe and Andy Letts returned after missing the Beckenham match. Gary Hingley was the coach in charge in the absence of Mike Pond who was on a holiday booked before he took the role of Head Coach.

Horsham kicked off down the slope on a sunny early autumn afternoon and after three minutes  converted a penalty to go 0-3 ahead. On 15 minutes they doubled the advantage with a second penalty.

Wanderers had a good share of possession but were playing impatient rugby and two minutes later confusion in defence opened the door wide for the visitors who raced through to go 0-13 up. Doody and Dave Lemon dispossessed an opponent to initiate a good spell for Thanet but a chip over Thanet’s defence led to a try that made the score 0-20. 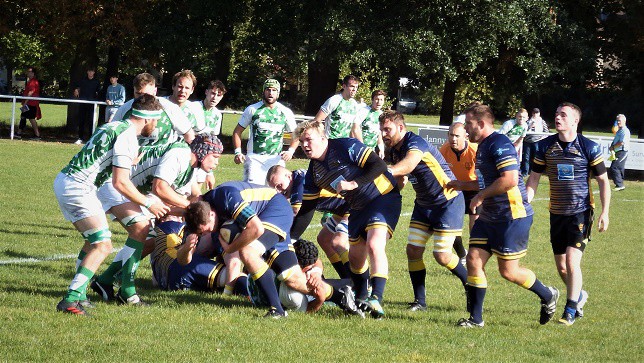 Neil Wakefield was adjudged to have deliberately knocked on and was shown a yellow card. An attempted clearance was charged down and Horsham stretched the lead to 0-27 after thirty minutes. Reece Hougham on Wanderers right wing had been threatening throughout the game and now given a chance by Rolfe’s break and Charlie Knight’s carry he broke tackles and then outpaced the defence for a quality try.

Rolfe’s excellent conversion made it 7-27. Horsham came back strongly but Wanderers’ defence with Stuart Plumridge and Captain Adam Gaddes outstanding held firm for an unchanged score at half time.

A minute into the second half Horsham took a try bonus point with a simple handling movement that wrong footed the home defence and three minutes later when Wanderers were offside Horsham’s kicker made it 7-37. 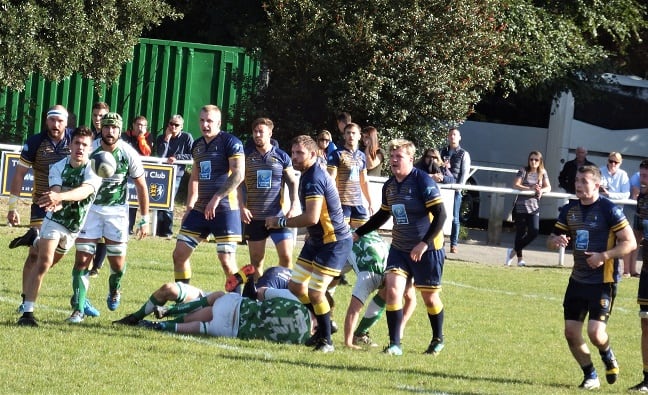 An ankle injury forced Kamil Wiecaszek off. He has played with increasing authority at tighthead  for Wanderers since joining after being introduced by his fellow Polish National second row Arkadiusz Janeczko.

It was the big lock forward who was at the centre of a Thanet catch and drive minutes later and he made it two tries for the season. Another good conversion from Rolfe helped to ignite the prospect of an unlikely comeback from 14-37.  Chris Hood had replaced Wiecaszek and was soon in the thick of the action. Stewart Box also left the bench replacing Jackson Perry.

Wanderers have worked hard on their fitness and it now stood them in good stead. Wanderers pack was increasingly dominant. A succession of powerful drives created the platform for the ball to be eventually spun to Copp in midfield and he broke tackles to touch down.

Rolfe’s conversion made it 21-37. Playing with the penalty advantage Hougham seemed clear but was called back for a forward pass. Rolfe’s long penalty took play to around twenty metres out and it was another powerful drive that brought Thanet’s bonus point try.

Hooker Neil Wakefield who was on great form today was the scorer and although the conversion was missed Thanet were going well at 26-37. The momentum was halted when a penalty was conceded for not releasing a tackled player and Horsham edged further ahead at 26-40. 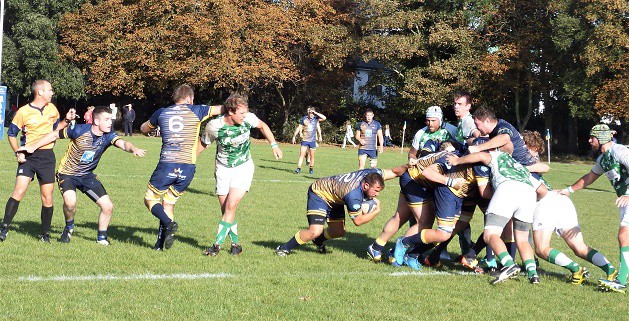 Continued attack left gaps at the back of Wanderers defence and another kick over the advancing home defensive line led to a further try for Horsham and a 26-47 lead with around ten minutes remaining.

Wanderers continued to press and were on the verge of a further score when Jay Sanford who had recently come on from the bench to replace Kris Finneran, sustained a nasty leg injury. This proved to be a fractured tibia which means he is the third Wanderers to suffer a broken leg in the last four home league matches.

The referee transferred play to the other end of the pitch for the closing couple of minutes. Just time for Wanderers  to notch a final fifth try and match Horsham’s tally. Forward pressure again secured the ball for Copp to power through the visitors’ defence and Rolfe hit a great conversion from wide right to make the final score 33-47.

For Wanderers Jake Webster was very active in the loose and looks increasingly at home at  loose-head but Reece Hougham was inspirational today with powerful elusive breaks, one of which brought the first try. He was Wanderers man of the match.

Next week Wanderers travel to Gravesend who have won two of their four matches after being relegated last season. The 2s will also be away to Gravesend 2nd XV and the 3s have an away fixture against Maidstone. All games will kick off at 3pm.