Mr Todd, AKA my husband, hadn’t suffered a day of illness in all his 62 years, the smug git, so this last year has been a bit of a shock to us both. Almost overnight, he began to suffer excruciating pain and stiffness in his shoulders, spine and legs, to the point where he could barely walk or sleep. We tried everything to fix him.

First, he gave up his job. Postmen suffer all manner of physical woes, lugging those heavy trollies over 13 miles each day: surely rest would fix him. It didn’t. So, we got one of those super-expensive, all-dancing, all-juggling mattresses. That didn’t do much either, save bankrupt us.

There were blood tests and doctor’s appointments. The doctor suggested ibuprofen, which churned his guts, but didn’t help the pain. Courses of acupuncture followed, then physiotherapy, afternoons at the herbalist, mornings at the masseur, all expensive, all pointless. Nothing helped. Some of it made him hurt more.

The worst of undiagnosed aches and pains is the way they become public property. Everyone has an opinion on them. Oh, you must see Dave the osteopath, he’s a magical witch doctor of a man, fixed me up a treat; or Susie the chiropractor, perhaps, or Bev the aromatherapist; or you must unblock your chakras, eat nothing but cabbage, stand on one leg beneath a full moon, chanting paeans to the Great God of inconvenience. Which is all very interesting, but usually expensive, or useless, and generally both. 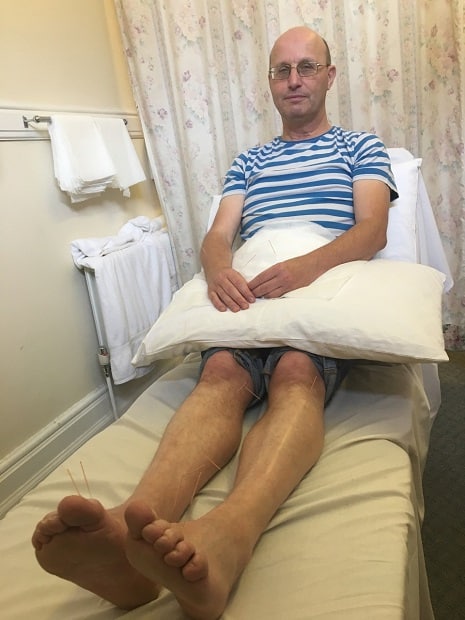 I have a terrifically posh, commanding sort of voice, and an ability to cry on demand. When Mr Todd could no longer walk, or hug me, I decided to accompany him to the doctor’s and if necessary, employ both, flat refusing to leave until Something Got Done.

But instead we saw a different doctor, so helpful and handsome I had to be restrained from licking his face, who listened very carefully to our tale of woe, then said, “Oh, that’s polymyalgia. You need a whopping great dose of steroids, that’s all. You’ll be fine.” He printed a prescription, beamed chummily at my pointlessly brimming eyes, and waved us away to freedom.

Handsome, helpful, and possessed of healing abilities to rival Jesus. Twelve hours later, Mr Todd was walking, dressing himself, squeezing me tight; two days after that he was cartwheeling down the High Street, squealing “Yah-hoo!” at passing strangers. Ten months of misery, ended with a pen stroke.

Polymyalgia occurs in around 1 in 2000 people, most of them women. It’s characterised by indescribable pain and stiffness in the back, shoulder and thighs. There seems to be an emotional connection – it’s often triggered by prolonged periods of intense stress, financial woes, bullying, domestic abuse. It’s entirely curable, with enough steroids. It doesn’t appear to be a particularly well-known disease – of the dozen or so professionals he encountered, despite displaying textbook symptoms, none of them mentioned it, before Dr Handsome.

I so hope writing this might spare some other poor devil the months of worry and misery we’ve endured. I’ve been frantic, frightened and furious in turn. Now I’m simply overwhelmed with gratitude.

Hurrah for our wondrous NHS. I’ve got my husband back.