Fire crews expect to be at the former Cummins/Hilger Analytical unit, at the Rank Crystal site on Westwood Industrial Estate, ‘for days’ dealing with the blaze which broke out this morning (September 15) due to the high volume of flammable waste packed inside the building.

Firefighters were called to the huge fire off Continental Approach at 6.20am. Initially there were 55 firefighters and 10 vehicles on site.

That number has now risen to 80 firefighters, 14 engines from across Kent and Medway and a command support unit and KFRS’ specialist technical rescue team.

Star Lane and Nash Road are currently shut while the teams deal with the blaze.

14 fire engines and around 80 firefighters are battling the blaze at #Westwood #Margate in an industrial unit. Fire crews are likely to be at the scene for sometime. Read more here: https://t.co/BAguuPCbuM pic.twitter.com/wtm0EmI6LS

Firefighter Ian Thomson, who is the duty brigade manager at the scene, said the ‘intense’ fire has caused the collapse of the roof and a wall and structural damage to the building. 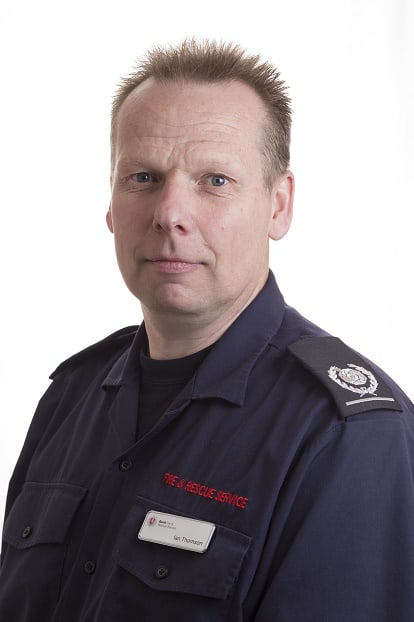 He said the blaze has been fed because the unit is ‘packed from front to back with ‘flammable waste.’

He said: “There is cardboard, wood, pallets, all wrapped in plastic, and all on fire. That is going to take a long time to deal with.

“Crews, who have been on the scene since 6.17am, are working really hard to contain the fire. We have a range of specialist equipment and have used our drone to understand the scale of the incident and thermal imaging to understand the spread of the fire.

“We will be here for days, the industrial unit is packed full of the pallets wrapped in plastric literally from front to back. It is going to take a long while to extinguish.”

Brigade manager Thomson said it is important for people to stay away from the area so crews can continue with the operation. He also urged residents to keep windows and doors shut.

He added that despite the huge attendance of firefighters and vehicles there is capacity across the county to deal with any other incidents.

Motorists are advised to avoid the area as traffic is backed up across Westwood and into Margate.

The cause of the fire is not yet known. Fears that the site was a potential fire hazard due to the waste in the building were raised in a BBC report in January. At the time the Environment Agency said it was investigating.

UPDATE 3pm: Firefighters are making steady progress in tackling the fire. They have been battling the blaze externally since just before 6.30am this morning (Saturday) and have successfully managed to contain and extinguish part of the fire at the front of the unit. Firefighting is still continuing in other areas of the building.

A KFRS spokesperson said: “Our fire crews have been supported on site by The Rapid Response Team volunteers (RRT), who have provided much needed refreshments for staff working tirelessly throughout the day.

“Please continue to avoid the area, while firefighting operations are taking place.”

Seven fire engines and a height vehicle remain at the scene of the fire. Crews are continuing to make good progress protecting a neighbouring unit, using ground monitors and positive pressure ventilation fans.

Measures taken to make sure the crew do not tire out include rotating staff. A KFRS spokesperson said: “They do get tired, so it’s important they have regular breaks and keep hydrated, we also rotate crews around and move them around the county to provide the additional support needed.”