A business inspired by the adoption of a deaf, European street dog has launched in Kingsgate.

Happy Chops provides dog food, treats and supplements that are healthy, natural, free of chemicals and ethically and responsibly sourced.

The business is run by Simone Massey and husband James who were prompted to research the subject after taking five-year-old American Bully/Mastiff cross Chops into their home. 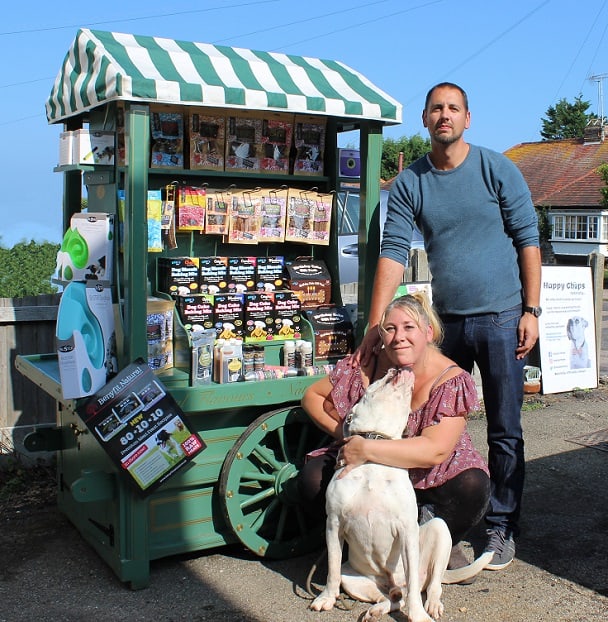 Chops was found in Budapest in such a poor state that he was thought to be a malnourished Boxer dog. He was brought to the UK by the Southern Boxer Rescue Service which is where Simone and James came across him.

Former University of the Arts, London, worker Simone said: “We were moving to somewhere bigger and wanted to rescue another dog. Chops caught my eye because he was similar to our previous dog Parsley and was also deaf, as she had been.

“Chops wasn’t a Boxer so they were sort of stuck with him and being deaf seemed to put people off.

“We had experience of dealing with a deaf dog because of Parsley and they kept him, fostering him, until we finished our move and could get him.”

Discovery Channel worker James,38, and Simone, 44, soon discovered that Chops was plagued by intolerances and allergies to everyday dog foods. This prompted the pair to start their research into natural, raw, chemical-free foods. 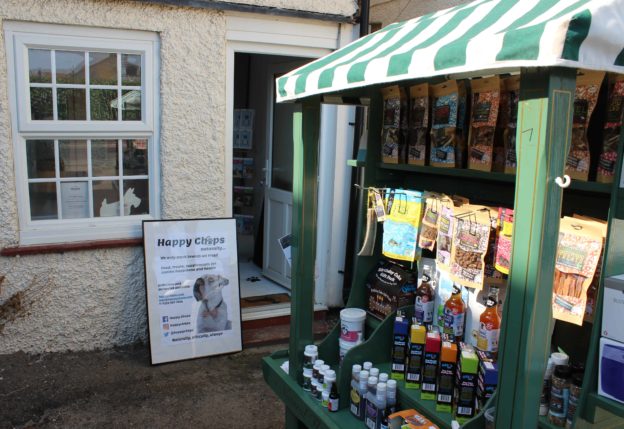 Simone, who was formerly in the Army and also spent a year working with Orangutans in Borneo, said: “He was quite sensitive, we don’t know if he has always been like that or it is due to what he went through, but he had already suffered so we put him on a raw diet. The information out there is mind-boggling.

“When you delve in to it, it is unbelievable what is, and isn’t, in the food. Many still contain additives, chemicals and ingredients that some dogs will struggle to digest.

“We researched what we were getting for Chops and that’s what started us off.”

Happy Chops was registered as a company in July and then the couple set about getting in the stock and preparing to trade. It launched in earnest this month.

Simone said: “We have been quite careful about the products we stock, they all come from independents – many of whom started up because of their own dogs. Everything we get in is good and natural. 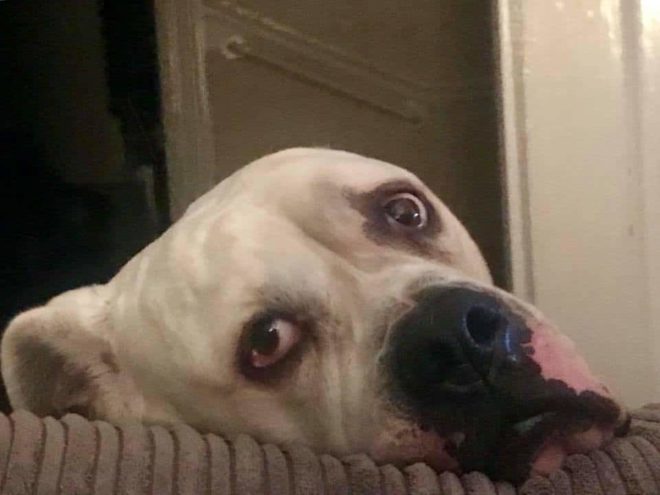 “There is a massive growth in the market for raw and organic products and I think this is going to get bigger. We in the UK are a few steps behind the US where raw foods and natural supplements and freeze dried products are already big.

With the pet food industry more people now seem to be realising what they are giving their dogs and realising these products do help their pets with well-being and health.”

As well as food and treats, Happy Chops supplies goods for minor ailments, paw and coat care, joints and mobility and more. They also stock natural remedies to keep pets calm during fretful times such as the firework season.

Orders can be made online for delivery. To pick up in person make an appointment at the time of ordering.