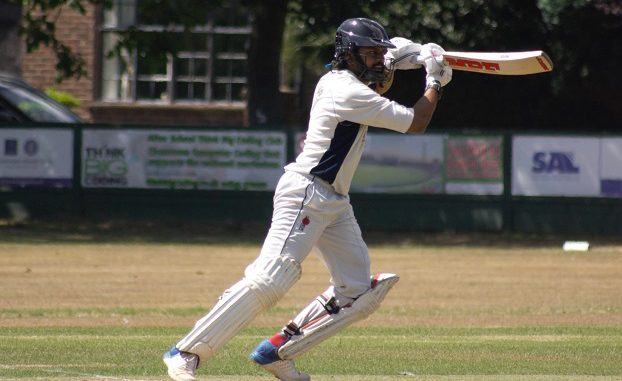 Broadstairs 1st XI secured a comfortable win away to Gore Court in their penultimate match of the season. However, with results elsewhere going against them, promotion hopes for the Seasiders hang by a thread.

Losing the toss and being invited to bowl on an uneven pitch full of surprises, the opening bowling partnership of Harry Carter (1-29) and Bradley Ellison (0-14) got proceedings off to a measured start, restricting Gore Court to 31 runs in the first 12 overs. The first breakthrough came with the introduction of Elliot Fox, who removed opener Joseph Eves and this was followed by a series of wickets from Swaroop Dasari who finished with figures if 3-20 off 10 overs. Alongside him, Chris Kidd 1-21 offered the tight control that has characterised his season and this stranglehold on the host’s scoring continued when Matthew Frewin was brought into the attack.

Frewin (4-14) worked his way through the middle/lower order, forcing wickets with 5 maidens in his 7 over spell and between him and Carter, they brought the Gore Court innings to a close with just 122 on the board. 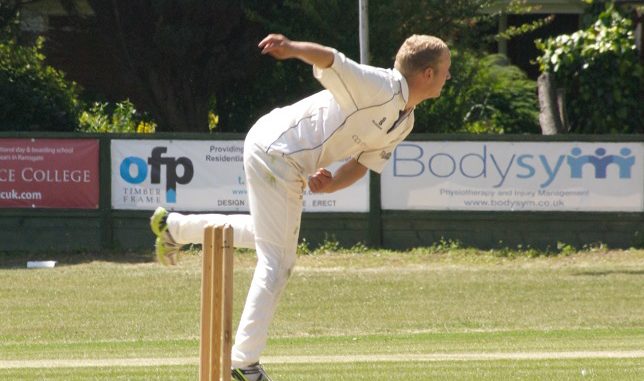 The reply from Broadstairs got off to a shaky start with Chris Flint (0) adjudged LBW with his 3rd ball and Jack Wheeler facing just 8 balls before being caught at mid-wicket without scoring, left-arm spinner Roche claiming both wickets.

At this point, with the score at 3-2, the rain started to teem down and play was suspended, with batsmen Fox and Dasari reflecting on how they would go about re-building the hosts’ reply. Once the rain had subsided and play resumed, the batting partnership went about their task in a watchful manner establishing a crucial partnership of 57, before Fox (28) was caught behind in the 23rd over attempting to sweep Clinton. Despite the fall of wicket,

Dasari continued to anchor the innings leaving Frewin to advance the total to within touching distance of the target through a series of lofted drive boundaries. Frewin eventually succumbed on 22 and it was left to Jamie Dewell (5*) to hit the winning runs, with Dasari (48*) just short of what would have been a well-deserved half-century.

Despite the win, Broadstairs’ promotion prospects suffered a significant blow with promotion rivals Hayes pulling-off a surprise win against runaway leaders Upchurch. With one match left to play, Broadstairs themselves need to beat Upchurch next week. In addition, they require Whitstable to inflict a heavy defeat on Hayes if the promotion to Division 1, that looked so likely mid-way through the season, is to happen.

Broadstairs 2nd XI moved one step closer to promotion with a convincing victory at home to Gore Court. Losing the toss and invited to field on a slow pitch with variable bounce, opening bowler Archie Ralph-Harding made early inroads, claiming 2 wickets in his 6 over spell.

A further wicket fell during this early period with an exemplary run out executed at point by George Kidd. Bowlers Ralph-Harding and Luke Palmer were replaced by Oliver Frewin and Kidd who were able to apply a squeeze on the scoring over the subsequent 15 overs and claimed 2 wickets apiece finishing with figures of 2-41 and 2-30 respectively. With the score at 93-7, it looked like the hosts might restrict Gore Court to a low total. However, whilst the overseas Baid was still around, there was the potential for runs to accumulate.

Indeed, with a series of boundaries, Baid almost single-handedly advanced the total to 159 before he fell for 93, caught by Nathan Fox off the bowling of the Ralph-Harding in his second spell. The remaining 2 wickets were claimed by Ashley Ellison and Gore Court finished their innings on 178 with more than 6 overs remaining.

The Broadstairs reply began with a stutter as Brian Simpson (11) was trapped LBW by Crompton in the 4th over. Fellow opener Fox was joined by Tom Marshall and together they offered stout resistance against the tricky movement provided by Crompton and Newell. Eventually, Marshall (7) succumbed to the bowling of Newell in the 13th over but he and Fox had by that stage done much of the work in seeing off the opening bowling pair.

When Fox was joined by Ralph-Harding, they were able to start attacking the second string bowlers and their partnership of 122 all-but-secured victory for the hosts. Ralph-Harding (55) fell in the 38th over and it was left to Palmer and Fox to see Broadstairs over the line. Fox finished with an unbeaten 65, his first half-century for the 2nd XI.

The win means that Broadstairs require just 3 points from their final match away to Old Colfeians in order to secure promotion to Division 1 next season.