Furious residents are planning a protest march objecting to proposals for 2,000 new homes in Westgate and Garlinge.

The proposals are part of the Thanet Draft Local Plan – drawn up by the council as a blueprint for housing, business and infrastructure up until 2031.

Westgate was originally allocated 1,000 of those homes but a vote to retain Manston airport as aviation-use only -a U-turn on the mixed-use development including 2,500 homes that was recommended in a version of the draft plan voted down in January – means the 2,500 homes have been reallocated to new sites.

The reallocation resulted in an extra 1,000 homes for greenfield sites either side of Minster Road in Westgate, bringing the draft plan total for the town to 2,000. This is a rise from the 700 proposed in 2015 which prompted the video below by resident Simon Moores.

A further 300 homes were allocated to Hartsdown, Margate and an additional 100 to Tothill Street, Minster. 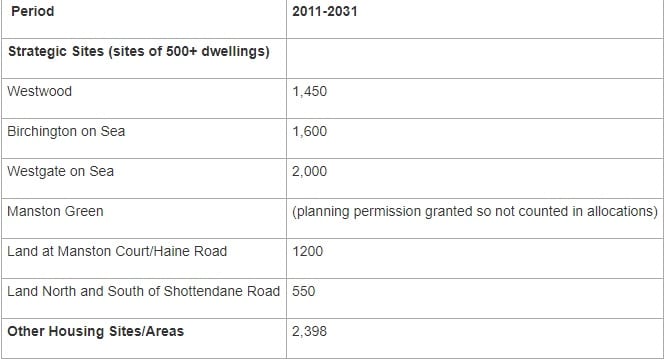 The reallocation means Westgate and Birchington will be the site of more homes than Westwood which had been the area planned for the greatest delivery of new builds.

The council says these sites are considered the most appropriate in terms of sustainability, transport and, local and national planning strategies.

The draft Local Plan, passed by councillors in July, is now open to public comment for 6 weeks, running up until 5pm on Thursday, October 4. The comments received on the Local Plan at this stage will be sent directly to the Planning Inspector for consideration. Anyone who does provide feedback at this stage may be invited to speak at the public examination of the Plan, expected to begin in February 2019.

The protest march, organised by the Westgate Development Concerns group, will take place on Saturday, September 1 at 11am.

It will start outside the Hussar pub in Garlinge and walk to Walk to Westgate Library and then to The Swan, Westgate.

The group says the building of homes should not be on agricultural land. They have also questioned whether the sites are simply being used to provide funding for new road infrastructure at Westwood Cross.

In a facebook post from the group, it says: “Thanet should not be allocated 17.1k houses and the majority of the houses should not be allocated to grade 1 agricultural land. Some houses should be built and they will be built but the truth is this: they are mainly being built in Westgate and Birchington to fund the new massive road scheme from Birchington to Westwood Cross.”

Find more about the group here

Read here: Thanet’s Draft Local Plan moves to the next stage despite concerns of over-development