A Westgate couple aged 73 and 69 are to tackle the 874-mile cycle route from Lands End to John O Groats in a bid to raise cash and awareness of Harefield Hospital’s transplant appeal.

Annette and Robert Culshaw began planning the epic challenge when Rob’s son Nick went into the London hospital in January to await a heart transplant.

Nick, 42, has a debilitating heart disease known as ARVC (Arrhythmogenic Right Ventricular Cardiomyopathy) It is a disease which often strikes young athletes, usually in their teens. It used to be known as Sudden Death Syndrome.

Since the age of 16 he has undergone several open heart surgeries but the process has left his heart damaged. He now needs to stay in Harefield until a suitable heart can be found.

Annette, 69, said: “He has had three offers of a heart but because he is so young and physically active Harefield said they just weren’t strong enough.

“He has been in Harefield since January and we don’t know how long it will take but he is so positive.”

While at Harefield Nick receives medication, fed by a 24hour syringe driver, which dilates the blood vessels easing the load on the heart while he waits for the transplant.

It could mean being apart from his wife and young children for many more months to come because of the shortage of organ donations.

While at Harefield the hospital finance worker has been using a virtual bike to ride the Lands End to John O Groats route and it was this that prompted his parents to take on the challenge for real.

Annette said: “We wanted to do it to support him, raise money for the appeal and bring about awareness of the importance of opting in to the organ donor scheme. There is a national shortage of donor organs and if our adventure can persuade just one person to sign the donor register it will have been worthwhile.”

The aim is to hit a £500,000 target which will pay for four new  Organ Care Systems. These keep donated hearts and lungs viable for up to four times longer than using traditional methods. It means donated organs can come from hospitals further away, arrive in better condition and give medical staff longer to prepare for and perform life-saving surgery.

The retired wedding photography business owners, who moved back to Kent from France ten years ago, have been planning the ride since February. They will be using electric bikes after Annette bought one in 2016 to help her tackle hill cycling.

She said: “”We bought our Oxygen S Cross electric bikes  just over 18 months ago.  These bikes have transformed our lives and we are out and about on them every chance we get. Our health and fitness have improved enormously and cycling has now become a major part of our lives. We have cycled over 3,500 miles since buying the bikes in December 2016.

“Prior to buying them I could not manage hills nor heavy head winds, and so cycling was no pleasure. Now I love it and can deal with both!” 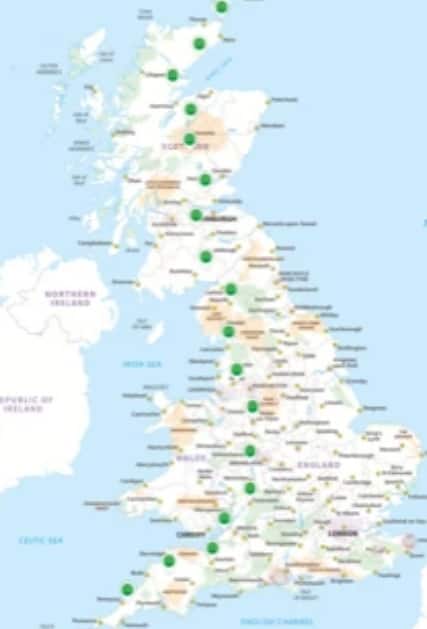 To prepare for the ride Annette and Robert have been cycling around 50 miles every day.

Annette said: “We want to build strength and stamina for the ride itself. It should take 23 riding days with one day off each week. That is not including getting to Land’s End in the first place so we have booked out a month to complete it.

“It has been a bit of a nightmare organising the route, we did it on google maps but then had to do it all over again on the ordnance survey map. We have put in bike shops, b&bs, pubs, everything we might need on the journey.

“At the moment I’m feeling confident and can’t wait to get started.”

The couple, wo also say they hope older people may follow their lead and try out electric bikes as a way to fitness,  start their ride from Lands End on September 3, coinciding with the start of the national Organ Donation Week.

Organ donation is giving an organ to help someone who needs a transplant. Transplants can save or greatly enhance the lives of other people.

The NHS Organ Donor Register is a confidential list of people who want to donate their organs and/or tissue.

Around 24 million people are on the NHS Organ Donor Register but there is still a shortage of organ donors. Around three people who could benefit from a donated organ die every day.