A crowdfunding campaign launched in a bid to convert a disused property in Cliftonville into a creative school for disadvantaged young people has successfully raised £36,979.

Arts Education Exchange CIC opened the crowdfunder in April to establish xChange Studios and gained the backing of artists Tracey Emin and music stars including Marcus Mumford of Mumford & Sons. The project involves converting a Cumberland Road house into a fully equipped recording studio, with three multi-purpose art studios, a video editing suite, a lounge/meeting space and two offices. There will also be a project/exhibition space.

The property will be designed by architects, Studio Octopi, founded by Chris Romer-Lee and his business partner James Lowe in 2003. 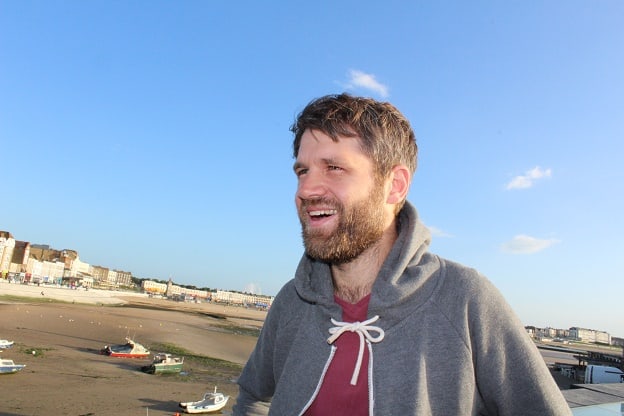 Photography, art and design teacher Ollie Briggs (pictured), who founded Arts Education Exchange in 2017, has been supported in his campaign by Turner Contemporary and Dreamland and endorsed by Tracey Emin and musicians Marcus Mumford, Django Django and Frank Turner.

Donations by The Colyer Fergusson Trust and Esmee Fairbairn Foundation, along with 210 pledges from the community have made the proposal a reality.

Ollie has already worked on arts programmes with Turner Contemporary, University for the Creative Arts, local schools and youth centres as well as commissioning various artists to run workshops with young people. He has been teaching in secondary schools for the past six years.

He said: “Cliftonville West has the highest level of child poverty in Kent and the South East, equating to more than 52% of under 18s living in poverty.

Our campaign has been backed by 205 people! We’re overwhelmed with the support from everyone who’s donated. There’s still time to get involved, pledge to be part of our vision to set up a centre of creative education for #thanet’s #youth https://t.co/KCJ5lh0B8y #xchangemargate pic.twitter.com/4hemnpShdM

“In the heart of this area, xChange Studios will be a community space offering a range of creative education programmes for young people. Despite such high levels of deprivation, Margate is currently undergoing a cultural revolution with an influx of new residents and businesses, many relating to the creative industries.

“XChange Studios will facilitate a cultural and educational exchange between these two worlds and actively tackle the lack of opportunity for young people in the area.”

Plans to establish an in-house record company to provide a platform for young people to gain skills and opportunities to access the music industry, as well as a specific job training scheme, are underway with Margate-based  Moshi Moshi Records.

It is hoped the project will provide skills, training and employment and increase access to the arts. It is aimed at youngsters aged 13 to 25.

Artist Tracey Emin said: “I think the xChange Studios Project is a wonderful initiative. It is exactly what the young people of Margate need, as I am convinced that Margate is going to become a cultural epicentre.”

Hartsdown Academy head teacher Matthew Tate added: ‘The collaboration with ArtsEdX has been extremely successful. We sent some of our most disengaged students to the project and saw an increase in engagement in lessons and a corresponding decrease in poor behaviour.

“We also had positive feedback from parents who saw the difference in their children. I am looking forward to further collaboration.’

Keep up to date with Arts Education Exchange here