As I write this piece at the beginning of the week, we wake to the news that David Davis, the Secretary of State for Exiting the EU, has resigned following the Cabinet agreement of the negotiating position for our future relationship with the EU. Looks to be the start of a busy week.

My opposition to any woolly-headed thinking about the legalisation of cannabis is well known. As the Chairman of the All Party Parliamentary Group – Cannabis: Harmful Effects on Developing Brains, I held a hugely attended evidence session in Parliament, presented to by two top Professors from the US who have examined in detail the outcome of legalisation in some US states.

The results were startling – huge price reductions, far stronger product sold in the most innovative and worrying ways – as cola bottle style sweets for instance, more accidental ingestion by children, more road accidents, higher levels of depression and psychosis and most remarkably a permanent lowering of IQs amongst youngsters exposed to the drug during their teenage years. Whilst proper medicinal use of properly tested pharmaceutical products will always be welcomed, my concern is that these moves are being promoted by some as a fig leaf for full recreational legalisation. 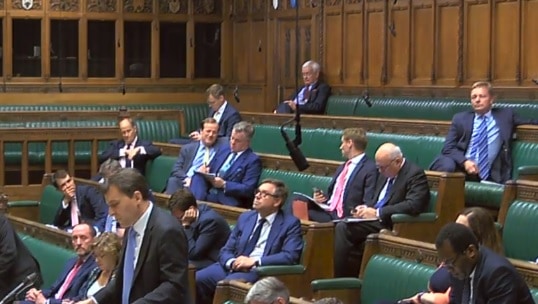 I raised a number of issues in Parliament, notably the need for additional infrastructure delivery across Kent, living as we do on the front-line of cross border transport to and from EU markets. For too long, all governments have been behind the curve when planning infrastructure when linked with substantial projects for new housebuilding.

All developing Local Plans across Kent include substantial housebuilding numbers (whether of course the developers will build is another matter). We need the infrastructure to cope and this would include, in East Kent, dualling of the A2 and the A256 to make a properly serviceable north to south spine in East Kent.

The long awaited Fisheries White Paper has been published. I have distributed copies to key leaders of the Ramsgate fishing community for comment, but indications are that the deal for our local fishermen will be improved.

Exporting is key to our country’s future, and we have a comparatively poor record, particularly in comparison with Germany who runs the highest trade surplus for its size of any country in the world. Myself and Sir Roger Gale were instrumental in getting the Department for International Trade’s mobile roadshow to Thanet (Friday 6th July) to offer their skills (entirely free) to local businesses who could and should be exporting. The experience is that British products have international appeal for quality. Much like tourism, exporting is new money arriving to the country leading to jobs and investment and improvement to the perpetually high trade deficit.

I congratulate Ramsgate Town Council on laying on a superb Armed Forces day event and truly exceptional to have attracted the central band of the RAF. My other local visits were to present Blaze Signs of Broadstairs with a nomination for the Parliamentary Responsible Business Award. Congratulations go to Business Computer Solutions of Haine Road Industrial Estate for completing the transition to employee ownership. Much like the concepts behind co-operatives of the past, real ownership of the business by employees has been shown to create success – I wish the new team similar success.  I also enjoyed my visit to The Hornets Boxing Club in Ramsgate – a community organisation doing superb work.

Keep on enjoying the fabulous weather.