The Thanet council owned car park at the rear of Dreamland has another Travellers’ group on site – the fourth incursion in as many months.

Police were at the site today (June 28) where ten caravans are parked up.

A Kent Police spokesman said: “Kent Police was called to a reported unauthorised encampment in Marine Terrace, Margate, at 3.29pm.

“No offences have been reported and the matter will be dealt with by the landowner, which is the standard procedure in terms of any eviction process.”

Thanet council has been notified by a ward councillor. 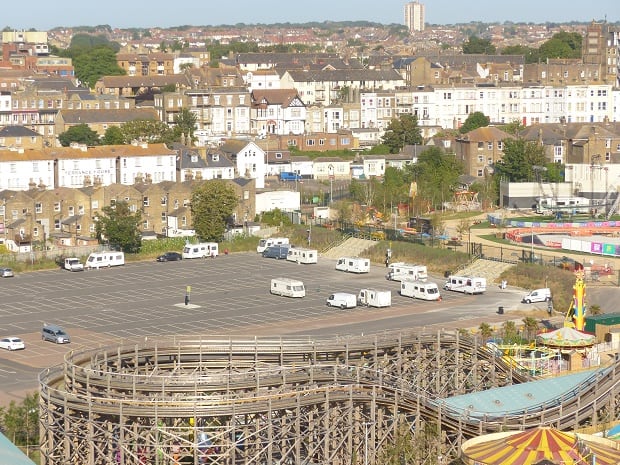 The car park has been used by Traveller groups frequently this year. A group who moved onto the site in March left two days later following the issuing of a court summons.

A second group used the site in April. The same month the Travelling community set up at Dane Valley Green.

On May 14 another group set up at the site. The following day they were issued notice to quit by Thanet council but remained with vans increasing from six to 10 by the weekend. An Order for Removal  was granted on May 25.

The group then moved to Jackey Bakers in Ramsgate and Minnis Bay car park.

This year there have been an increasing number of Travellers setting up on the isle, mainly at Dane Valley Green and Jackey Bakers but also at Ramsgate Port, land by Manston Tesco, St Nicholas, land by Manston airport, land at the rear of B&Q and Dreamland.

The most recent settlements at Dane Valley Green and Jackey Bakers have resulted in the need for clear up operations due to flytipped waste.

The incursions have prompted calls for action – such as barriers –  from residents in Dane Valley and those living close to Jackey Bakers.

There have also been suggestions that Thanet council should provide an authorised site similar to those in Canterbury and Aylesham.

Last August Thanet council revealed that Traveller incursions on the isle had risen a massive 15-fold over five years.

In 2013 Thanet council dealt with two incursions. Last year there were around 40. Preventative measures were being discussed along with possibilities that a sanctioned site was necessary.

The primary purpose of this assessment was to provide up to date information and data regarding the needs and requirements of the Gypsy, Traveller and Travelling Showpeople communities. The report presented the projection of pitch requirements for the period 2013 – 2027.

However the rise in the number of encampments could mean a review of that assessment becomes necessary.