Broadstairs CC 1st XI made it three wins out of four with a victory over local rivals Whitstable in an enthralling encounter at the Belmont on Saturday (May 26).

Having won the toss, the hosts elected to bat first and got off to a stuttering start with the opening seam attack of Elliot Fox and Masoud Rangin striking early with the dismissal by Rangin of Lewis, caught behind by Jack Wheeler. The bowlers continued to hit the spot and Whitstable continued at a rate of 3 per over for the first 10 overs.

The second wicket partnership of Loader and Appleby resisted the combination of seam and spin from Farjad Yasir, Swaroop Dasari, Jamie Dewell and Chris Kidd for the next 14 overs. They advanced the score to 89 when the breakthrough finally came just before drinks with Dewell bowling Loader for 33. Whitstable’s skipper Appleby was also eventually dismissed by Dewell, spectacularly caught behind by replacement wicket-keeper Chris Flint but not before Appleby had amassed 60 runs and established a good platform for the middle order.

However, what followed was a dramatic collapse with 4 further wickets being lost for the addition of just 21 runs, Dasari (2 wickets), Kidd (1 wicket) and Alfie Huntley with a run out doing the damage. Whitstable now found themselves at 129-7 with a possible 14 overs still remaining and a strong likelihood that they would be defending a low target.

The tail-enders had other ideas however and although 1 further wicket was to fall when Sinclair was caught by Callum Morgan off the bowling of Fox, Jordan and Smith conducted an unbeaten and productive 9th wicket stand, completing the host’s innings with 205 on the board.

Whilst this total represented a tougher challenge for the visitors than they had expected, Broadstairs began their innings with some confidence that if the top order could reproduce the form of recent weeks, they should be able to win the match.

The opening partnership of Chris Flint and Fox started cautiously against the pace of Mills and Jordan and when Flint was caught off the bowling of Jordan in the 8th over, the score had crept up to just 22.  In at number 3 was 14 year-old George Kidd, a  newcomer this season to the 1st XI. He and fellow teenager Fox established a highly effective partnership with Kidd providing stability and steady scoring alongside the more aggressive hitting of Fox. Together Fox and Kidd put on 104 runs with Fox achieving his 4th half-century in as many weeks, eventually being caught for 78 at deep-midwicket off the bowling of Dale.

With things still very much in the balance, the match looked like it could fall back into the hands of the hosts when Dasari (8) was trapped LBW. However, Kidd displayed maturity beyond his years and continued to provide an anchor role, now for the incoming Jack Wheeler who treated the Belmont spectators to a show of electrifying shot-making. He and Kidd saw the batting side home with 3.5 overs to spare, Kidd finishing on 52 and Wheeler reaching 54 off just 35 balls.

This was an important victory for Broadstairs; it consolidated their position at the top end of Division 2 and also demonstrated that there is strength in depth in batting to complement the highly effective bowling unit.

On Saturday, Broadstairs host bottom of the table Ashford and will be hoping to build on their early season success.

With the Bankers not having the best start to the season, Broadstairs fancied their chances and after some early morning precipitation Andy Marshall won the toss and decided to bowl first. HSBC had turned up with only 10 men.

Archie Ralph Harding entrusted with the new ball and he used it well, swinging the ball away from the batsman and beating the edge regularly. Bradley Ellison was doing the same at the other end, thinking he’d got the first wicket in his second over, the ball beating defence and kissing the leg stump, unfortunately the bail didn’t dislodge. Both bowlers kept scoring to a minimum but it was in Archie’s fifth over when the breakthrough was made, bowling Butt 16-1. 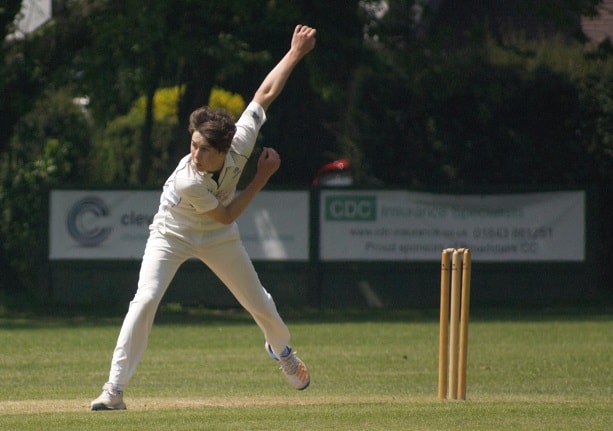 Archie finished his opening spell of 6 overs for just 18 runs and he was replaced by young speedster Harry Carter. Harry bowled well and in tandem with Ellison they restricted the scoring shots. This frustration led to a suicidal run out, the ball hit to Carters left and the batsmen set off.

However, they had underestimated the fielders arm and a decent throw into Lee Hewitt meant that HSBC were 42-2.

Bradley Ellison finished his spell of ten overs for 24 runs and with Harry’s first spell identical to Archies except in the wicket column. 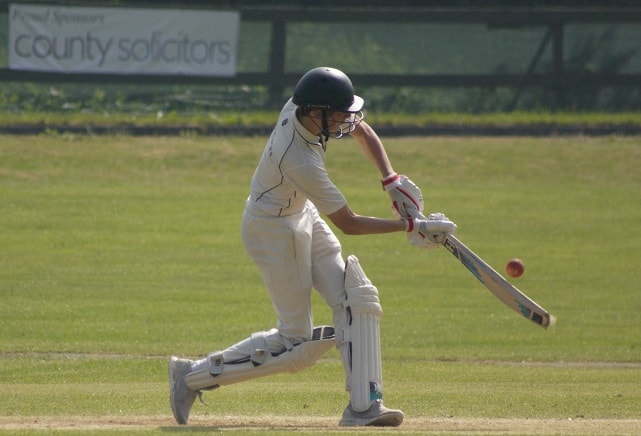 The spin duo of Oli Frewin and Ashley Ellison were brought into the attack, both have bowled well so far this year and look like taking wickets and true to form this is where things started to happen. With the score on 100, Zakeer attempted to play across the line to a full delivery from Ash and was adjudged LBW. Two overs later and the man they call the Walrus got his second, the batsman advanced down the track, missing the ball and Lee doing on the honours behind the stumps. 112-4 then became 126-5 with Frewin (9-0-22-3) getting in on the act and bowling Julka in his seventh over,

Firstly a quick yorker which beat the defence of the batsman, a feat he repeated with the first ball of his next over and HSBC were all out for 141.

The only negative from the bowling and fielding performance was the amount of wides, 23 in total! 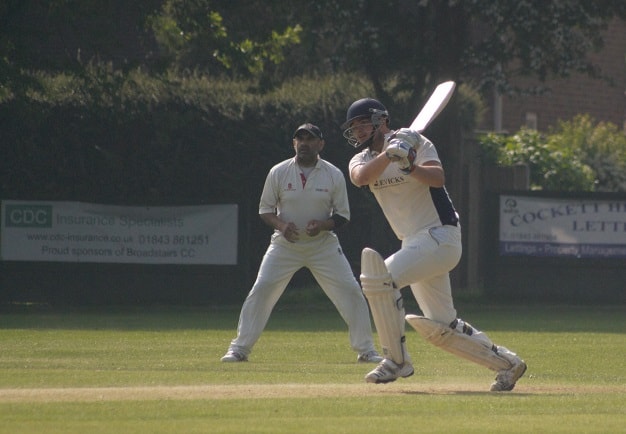 After another legendary Broadstairs tea, Lewis Hewitt and Tom Marshall opened the batting. Lewis was in no mood to hang around, hitting two boundaries in the first over. Marshall also started positively with a two followed by a classy leg side boundary but then fell to the fourth ball of the second over (6) cutting to point. BCC were 14-1, Archie went in at 3, and as with Lewis, his first 2 scoring shots were boundaries.

HSBC were unable to contain these two exuberant batsmen, they played shots all around the ground, Hewitt doing what he does best, power hitting over the top, mixed with glorious cover drives, Ralph Harding was also keeping up at the other end with his own attacking style that is a joy to watch! Shot after shot from these two had the ever increasing crowd of spectators, clapping and cheering. 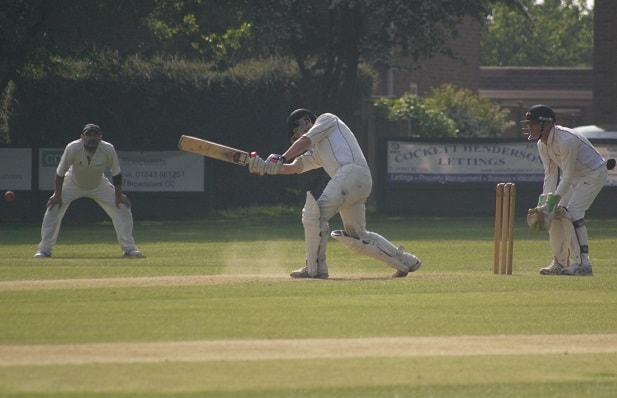 The Broadstairs 50 came in the eighth over, 2 overs later with the score on 65, Archie (20) played one shot too many and found a fielder. Nathan Fox joined Lewis and picked up the singles so that Lewis could keep the destruction going.

Nathan was eventually bowled (11) but Broadstairs were 107-3 in the seventeenth over. It was just a matter of time before they were able to sample the BCC beer and the HSBC boys could get back for the champions league final!

Lewis brought up his half century, a fantastic innings, punishing the bad bowling, treating the good balls with respect and stealing singles along the way. Harry Carter had joined Lewis, he was in no mood to waste any time. After a couple of overs getting his eye in it was Ahmed who felt the wrath of Carters bat, three enormous sixes in one over took Broadstairs over the line in the 21st over, Carter finishing unbeaten on 26 and Man of the Match Lewis Hewitt 76.

Broadstairs travel to top of the table Bexleyheath next, a tough game and they will need to be at their best.