A yellow welly travelling across the south of the country to raise funds for the RNLI has reached Thanet.

Lyme Regis RNLI volunteers started this year’s Mayday Yellow Welly Relay on May 1. The RNLI hopes to raise £750,000 through the appeal which will be used to fund essential kit for the charity’s brave volunteer lifeboat crews.

The Yellow Welly is travelling through the South East, South and South West and will visit 65 lifeboat stations on its travels. It will finish on May 31 on the Thames in Teddington.

Yesterday (May 22) it reached Ramsgate RNLI and today the crew took it to the wartime Tunnels where it was handed over to Broadstairs lifeguards to pass on to Margate RNLI.

A Ramsgate RNLI spokesperson said: “A huge thank you to Coco Latino for lending us their party bike to transport the ‘Welly’. 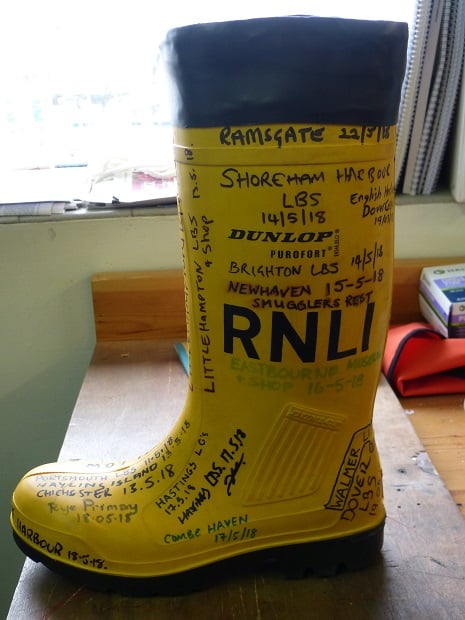 “It’s being done to promote The Yellow Welly appeal to raise money to buy equipment for the RNLI and coincides with the start of the Respect the Water campaign aiming to encourage people in danger in the water to fight their instincts and float not swim.”

Find more on the Respect the Water campaign here