A petition launched in protest at parking charges proposed for currently free to use spaces in Minnis Bay has gained 400 signatures in less than two days.

The seasonal charges at The Parade, and other isle sites, were first proposed by the council in April last year as part of a three phase scheme to change free car parks and on-street parking areas to pay and display and introduce resident permits.

During consultation on the proposals between 5 May and 6 June 2017 the council received 290 submissions and a petition of 1,029 signatories in relation to the Minnis Bay proposal.

Following the public outcry amendments were made to the scheme last October.

Amendments included removing Minster and Monkton car parks from the scheme and transferring them to the parish council  and reducing the parking charge at Joss Bay and Minnis Bay from £2 per hour to £1.50ph and the moving the time the charge starts from 9am to 10am.

Thanet council said the revised scheme would bring in additional annual revenue of approximately £390k per year. The aim was to plug the gap left by cuts to council grants from central government.

The Parade at Minnis Bay was part of the final phase of the scheme. 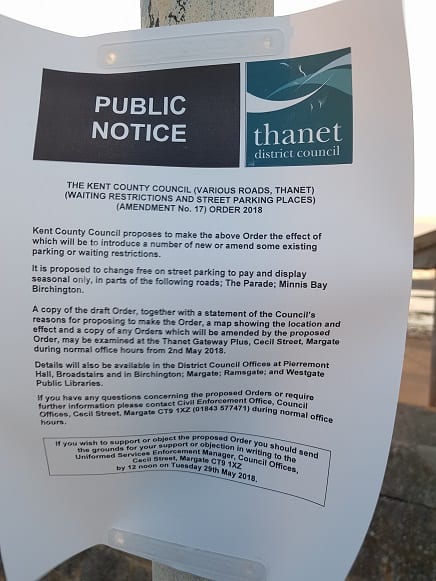 Last month a council notice was put on the road to inform residents of the imminent order to introduce the seasonal charges changing free on-street parking spaces to pay and display.

The petition, created by Nick Blankley and being promoted by district councillor Suzanne Brimm, has branded the proposal as ‘unnecessary, unjustified, ill-informed, contradictory and undemocratic.’

Cllr Brimm says she is angry that the charges are being pushed forward, claiming a Thanet council officer previously told her the scheme had been “kicked into the long grass.”

She says she has made an official complaint about being given incorrect information.

She added: “This will blight Minnis Bay’s residents lives as people will park on the green verges outside their houses before they pay to park.

“There were considerable objections to this scheme but the council is riding roughshod over everyone.”

A Thanet council spokesman said: “The charges were proposed to help on street spaces turn-over at an appropriate rate and include marking out bays in nuisance areas to help address the issues of inconsiderate parking for residents, improve pedestrian safety and encourage traffic flow.

“Funds raised will be used to help maintain our current parking stock and to fund improvements like the recently resurfaced Albion Road car park in Broadstairs. It will also mean we can explore future technological solutions like automated number plate registrations, solar power and smart parking to help improve car parking across the district.”

Send in your views

Support or objections to the proposals can be sent to Uniformed Services Enforcement Manager, Council Offices, Cecil Street, Margate, CT9 1XZ before noon on May 29.

The revised scheme agreed in October