Arek Arkadiusz returned to Wanderers second row and in a reshuffled back line Peter Macaulay was at ten with Nick Herbert replacing the unavailable Jay Morbey at outside centre. Joe Carlier started at tight-head prop where he has played in all of Wanderers league and cup games this season, the only ever present in the side.  Conditions were tough for the players with unbroken hot sunshine and a bone hard pitch.

Crowborough, playing down the slope, were soon on the scoreboard with a well worked try and the conversion from wide left opened up a 7-0 lead.  Kieran Wright stole a line-out and a patient build up with Sam Rolfe and Nick Herbert prominent ended with Charlie Knight’s classy finish. Herbert’s conversion attempt was wide. Arek showed good pace as he counter attacked but a promising attack broke down when Wanderers were penalised for not rolling away.

On a quarter of an hour Thanet’s Captain Brett Scott was forced off with what has proved to be a fractured ankle with surgery due on Sunday. The massive gap in the Wanderers back row was filled by 18-year-old Harrison Elks on his debut in the first team and he  soon demonstrated his good tackling technique. Adam Gaddes took over as captain from Thanet’s tackle machine. 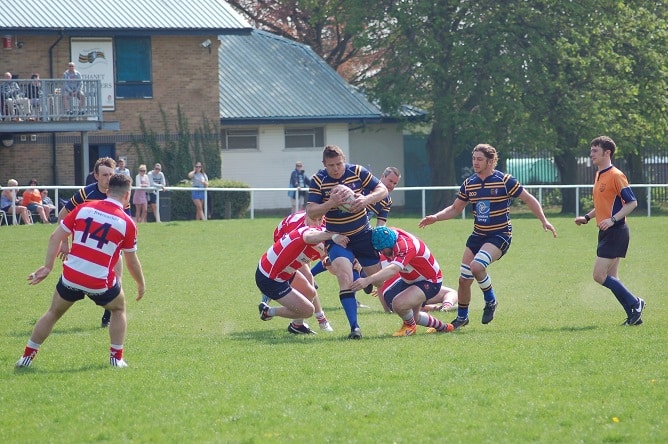 Neil Wakefield became an extra back-row forward carrying and driving the big Crowborough forwards back.  A great tackle by Knight saved a likely try before on twenty minutes Herbert broke well and Rolfe went close. He had been injured earlier and a few minutes later had to retire to be replaced at fullback by Isaac Roe and teenage winger Reece Hougham returned to first team duties from the bench.

Wanderers were struggling to find their usual fluency but looked dangerous with Danny Clement’s probing carries testing the visiting defence.  Two tries in three minutes gave Wanderers the lead around the half hour mark. Roe was on hand to take over from Herbert and show good pace to score his try and minutes later Arek carried strongly with Wright continuing before after solid forward pressure Andy Letts was the scorer. Nick Herbert converted both for a 19-14 Thanet lead. This was short-lived as a Crowborough penalty was taken as a scrum and the pack mauled their way over from near the twenty two to regain the lead by 19-21at half time. 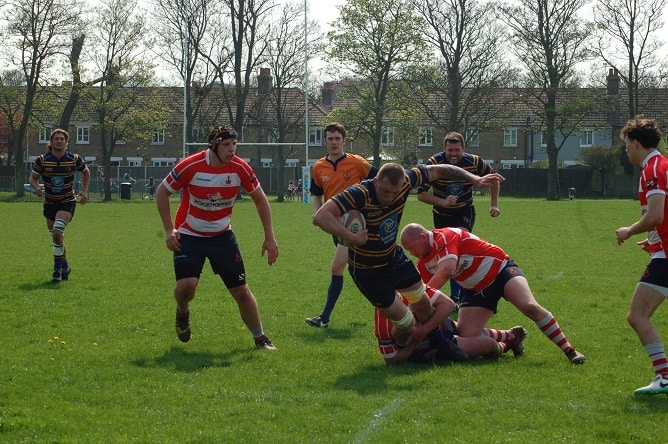 Good work from Joe Carlier from the restart secured a penalty and a slick line out resulted in a patient build up finishing with a penalty near the other wing. Elks and scrum half Tom Walton combined well before Walton  touched down. In this end to end game Crowborough quickly replied  with a try to regain the lead 24-26.

Macaulay’s booming clearance sent Wanderers deep into Crowborough’s half but the visitors continued to press. Thanet’s defence was stretched but there was an excellent tackle from Hougham and Stuart Plumridge’s experience was evident as he marshalled the back line and tackled strongly. Jay Sanford replaced the injured Carlier with twenty minutes remaining.

The clock was ticking and as Wanderers went for the decisive score, referee Paul Shepherd warned the visitors for persistent infringement before finally Crowborough’s centre Bertie Boast was shown yellow.  There was increased urgency from Thanet as replacement skipper Adam Gaddes called for one last effort to break down the stubborn visiting defence as the game moved into the final five minute. 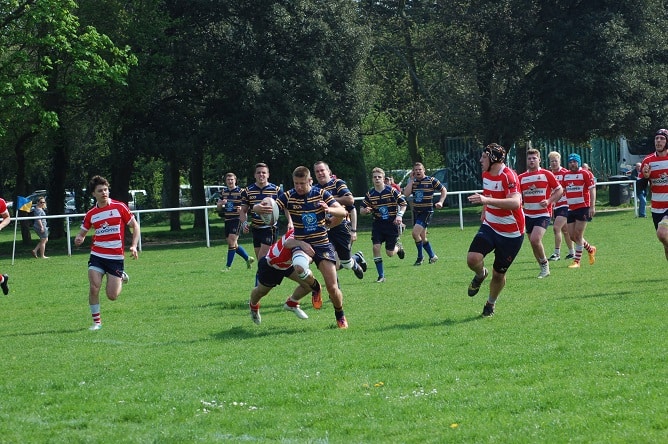 Herbert sent a penalty to five metres out and after a good line-out Wanderers second row of Arek and Wright linked well before the latter got the crucial touchdown. Nick Herbert’s conversion gave Wanderers a five point cushion 31-26. Wanderers held on to possession from the restart before Macaulay led a wonderful break and then released Knight who powered through the visiting defence for his double. Herbert’s conversion gave a final score of 38-26.

Warren Riddell-Broomfield, whose leg was badly fractured last week. was supporting and joined his teammates to pass through Crowborough’s post match players’ tunnel in his motorised wheelchair. Head Coach Tom Carlier reflected on a hard won victory and the ups and downs of the season that has brought promotion and thanked the players and support staff particularly the physio’s led by Monique Boorman whose expertise has been invaluable throughout the year. 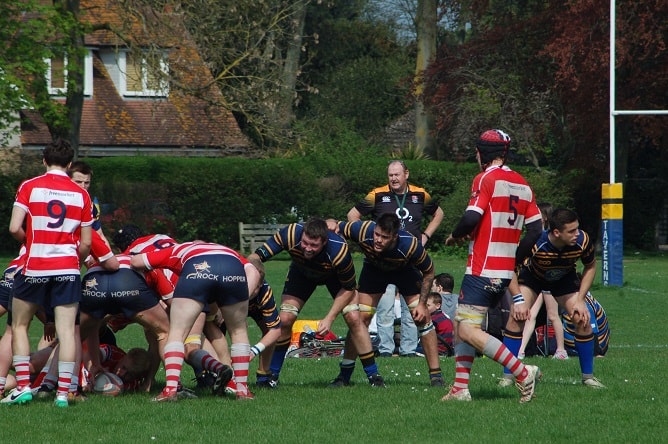 He was minded to not nominate an individual as man of the match but award it to the entire team although on refection the outstanding performance of young Harrison Elks was deserving of special mention as he showed great courage and ability in his first, first team outing and he was nominated as Wanderers Man of the Match. There is a great attitude in the team which augurs well for what will undoubtedly be a testing season ahead from September in London League 2.