A depleted Wanderers Veterans side led by the ‘Flying Pig’ has stormed to victory to take the Spitfire Golden Oldies Plate.

Captain Elliott Stokes earned his nickname from team-mates for being able to run 100 metres in under 12 seconds despite his ample size. He was one of three players at the Maidstone RFU ground on Sunday who had been part of the Thanet 1st XV which won the inaugural Intermediate Cup at Twickenham in 1997, beating Doncaster Knights in the final. 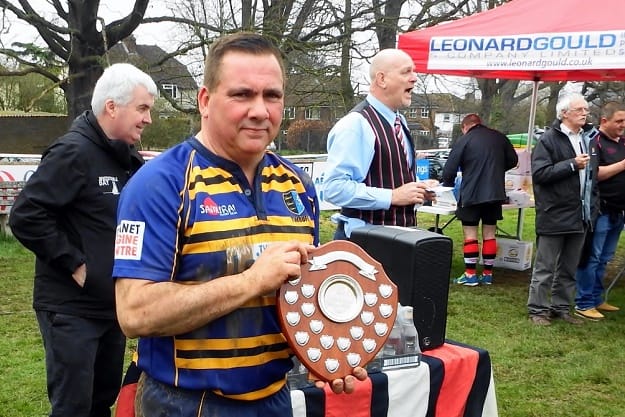 The 50-year-old winger, who has been playing at Wanderers for a whopping 35 years, opened the scoring against Tunbridge Wells in just over one minute with a try converted by Tom Longdon.

Two excellent tries soon followed from left wing Jonty Stevens and Peter Macaulay scored in the last play of the half as he caught a desperate effort to clear the Wells lines to stride in to touch down for 22-0.

In the second half Jonty Stevens completed a notable hat trick. Wing forward Ant. Knight was well up in support to score his try before full back Tom Longdon also got on the score-sheet with a try to add to his two conversions in another masterful display.

As Thanet pressed, a wayward Wells hand-steered a Thanet pass into touch which did not please the referee, who awarded Wanderers a penalty try.

There was just enough time left for Tunbridge Wells to end a sporting game on the Maidstone RFU grounds with a consolation try to make the final score 46-7.