On one of the coldest afternoons of the year on Saturday. March 17, the Rotary Club of The Isle of Thanet Sunrise held their ninth annual charity ‘Rotary Big Knit 2018’, at Holy Trinity Church, Cliftonville. Months in the planning, but on the day members were worried. Would the snow and freezing cold temperatures put the sponsored knitters off? Would they turn up?

The combined efforts of all these knitters will enable the following local charities to be supported this year: Headway East Kent (brain injuries support); Pilgrims Hospice; Thanet Young Carers and Prostate Cancer (support association Kent). It’s too early to say how much was raised at this years event, as it takes a while to get all the sponsorship money gathered up, but the previous eight years Big Knit has raised a massive total of £40,000 for local charities. Once the final figure is in it will be announced and a presentation made to the charities listed, all of whom had representatives in attendance on the afternoon.

Grateful thanks once again this year to the sponsorship generously donated by Karen Wright of Wright & Shadwell Financial Services. Margate Ambulance Corps, 1st Westgate Margate Boys Brigade and Girls Association for their assistance and presence on the day.

The winner of the ‘longest length’ was Wendy Young, with a massive 20 inches knitted! All the knitted lengths were collected up at the end of the afternoon and will be sewn into blankets by Jan White and passed onto ‘Operation Sunshine’.

Our next fundraising event will be a ‘Race Night’ with overhead ‘dancers’ at Kearns Hall in Birchington. For details of future events please contact secretary Caroline Winzer on 01843 842882 or visit www.rotarythanetsunrise.co.uk or Facebook: The Rotary Club of The Isle of Thanet Sunrise

Margate’s RNLI lifeboat station has benefitted to the tune of £2,500 thanks to the efforts of Thanet Quilters

Formed in 1991, Thanet Quilters is the umbrella organisation for all the patchwork and quilting groups in the Thanet area of east Kent. Its membership of around 100 meets regularly in Birchington where they share their experiences and arrange events around the subject of quilting including workshops, auctions and sales of their work.

Recently, a presentation was held at one of their meetings where Carol James, Thanet Quilters Chairperson presented a cheque for £2,500, the result of their fundraising efforts to Margate lifeboat Coxswain Kevin Andrews and Deputy Launching Authority Ian Lowe representing Margate lifeboat station.

Paul Hodson, Lifeboat Operations Manager, Margate lifeboat said: “The group have attended some of our events and have become good friends to the station, we are honoured to be their charity for both last year and again in 2018.

“The RNLI relies entirely on the goodwill of its supporters and charitable donations from the public and this donation will help us carry out our work of saving life at sea.”

Unfortunately, this month’s meeting had to be cancelled due to the extreme icy weather conditions.  As the ‘Margate Caves and Thanet’s Underground Heritage’ is a fascinating and topical subject, we are pleased to confirm that Rod LeGear MCIfA (Vice President, Kent Archaeological Society, Chairman, Kent Underground Research Group) will now be giving this talk on the rescheduled date of Thursday, 14 June – full details to be given nearer the time.

Our next meeting will be held in the Ballroom at the Walpole Bay Hotel, Fifth Avenue, Cliftonville on Thursday, 5 April at 7:30pm – attendees are requested to be seated by 7:15pm.

The meeting will start with Members’ News, followed by our guest speaker:  Mike Bundock (Chairman, Herne Bay Historical Records Society) who will be giving an illustrated talk entitled ‘Public Timekeeping on the Isle of Thanet’ – which will be followed by an opportunity for any questions.

As always, during the evening raffle tickets will be on sale (£1 per strip or 6 for £5) with the draw taking place at the end of the evening.

All are welcome – nominal entrance fee is £3 for non-members.

If you are interested in joining Margate Civic Society, or wish to find out more, please see our website www.margatecivicsociety.org.uk for further details. 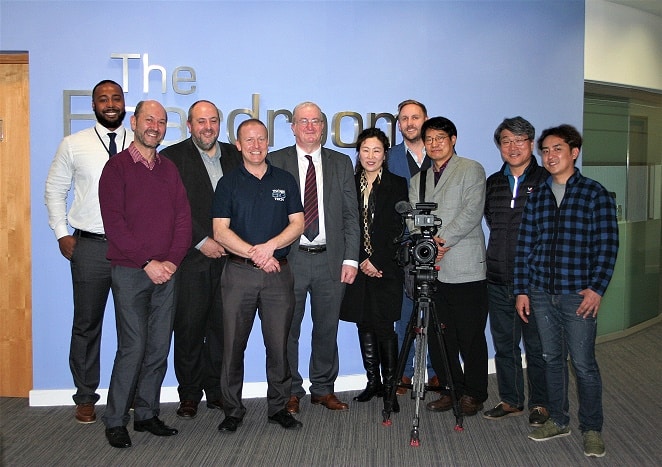 The Korean national broadcaster, KBS, visited East Kent this month for a series of meetings organised by the Thanet & East Kent Chamber of Commerce. With South Korea due to raise its minimum wage by 16.4% next month, there is much interest from this Asian powerhouse economy in the impact of minimum wage legislation in the UK.

The Thanet & East Kent Chamber contributed to the recent report of the UK’s Low Pay Commission. Drawing on its extensive network of companies of all sizes, the Chamber organised for KBS a series of interviews and meetings with local firms. Site visits at Holiday Inn Express Ramsgate, the Walpole Bay Hotel and K Laundry allowed the KBS team to hear first-hand a variety of views and opinions on the UK’s Minimum Wage rise of just over 4% which is due to take effect next month.

The day concluded with a symposium at Discovery Park Sandwich, the most successful of the UK’s 48 Enterprise Zones, where the KBS documentary-makers were introduced to some flourishing start-ups and established companies, all making the most of the world-class facilities available in the business-friendly Dover District.  , Ms Park, spokesperson for KBS said: “We were delighted with the meetings organised by the Thanet & Dover Chambers of Commerce and look forward to learning more about the success of their advice clinics.”

Chamber Chief Executive David Foley said: “We were pleased to be invited to showcase the great opportunities in East Kent and expect to strengthen our ties with one of the most successful economies in South East Asia.”

Broadcasting to a national audience of over 50 million, KBS is expected to show the documentary in early April 2018.