Kent Fire and Rescue services and police have been called to a blaze at the former house of wrestling star Jackie Pallo.

Smoke could be seen billowing from the property off the Haine Road in Ramsgate.

Ozengell Farmhouse, on Haine Road, was on the market for £225,000 last Summer. 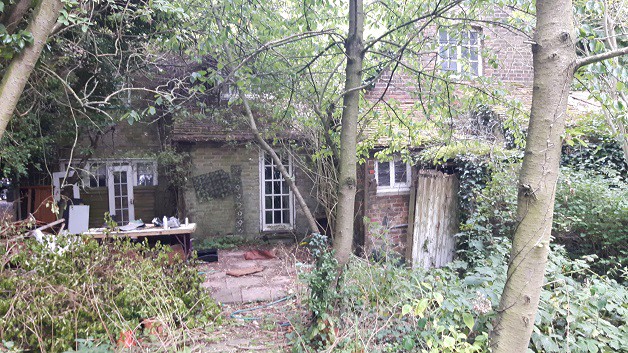 The Haine Road four-bed property was in a severe state of disrepair.

Ramsgate and Margate crews were called to the site with 16 firefighters and four fire engines at the scene during the height of the blaze.

Crews, who were called out at 4.15pm, were fighting the fire wearing breathing apparatus and using fog spike and a main jet. A water shuttle was also in operation. By 6.30pm the firefighting operation was completed and crews were cutting away and damping down.

Kent Police were also in attendance. The cause of the fire is not yet known.

Traffic was brought to a standstill off Haine Road during the operation to get the flames under control.

A Kent Police spokesman said: “Kent Police was called at 4.27pm  regarding a reported fire in an empty building near Haine Road, Ramsgate.

“Officers attended and assisted Kent Fire and Rescue Service with a road closure near the scene while the fire was extinguished.

“The road was reopened at around 8pm and an examination into the cause of the fire is ongoing.”

UPDATE: Kent Fire and Rescue Service say the cause has been recorded as ‘unknown.’