Thanet council is being called on to ‘urgently reconsider’ a decision to charge for the disposal of household clinical waste.

The charge applies to yellow or orange sacks and sharps boxes.

The decision to charge, which will hit many people including diabetics who use sharps boxes for disposal, was made in December when new fees and charges were agreed for the 2018/19 financial year as part of the council budget.

In a letter sent to people who use the service, Thanet council says although the service was previously free it has been necessary to ‘revisit’ the issue of charging. 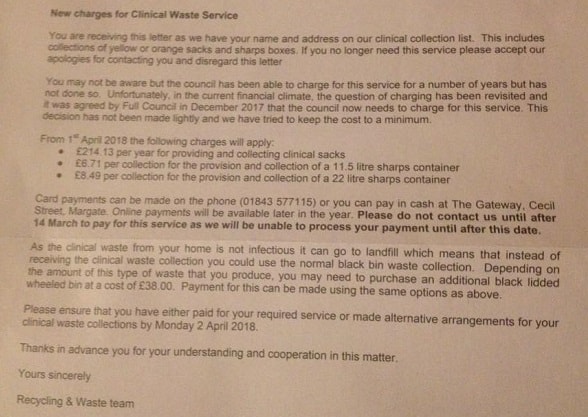 The letter states: “Unfortunately, in the current financial climate, the question of charging has been revisited and it was agreed by Full Council in December 2017 that the council now needs to charge for this service.

“This decision has not been made lightly and we have tried to keep the cost to a minimum.”

From April 1 the charges will be:

Other local authorities, including Canterbury, do not charge for the service.

Cllr Jenny Matterface, speaking on behalf of the group, said: “I have been getting phone calls and emails from residents shocked to learn they will have to pay £214 for their yellow-bagged waste and a charge for each collection of their sharps in the secure container.

“As one resident said ‘ I didn’t choose to be a diabetic and it isn’t due to my lifestyle yet I am being penalised for it’.

“Another told me he is concerned that those who have the contaminated waste bags will just use the communal black bin at their block of flats. ‘Who can say that it isn’t infectious or a risk to others?

“Will those using needles just wrap them in newspaper and put in the bin?’It is a potential health hazard.

“These charges are an additional burden on those already having to cope with a medical condition and we call upon TDC to reconsider the matter urgently.”

Angry residents have made complaints to Thanet council and contacted isle MPs Craig Mackinlay and Sir Roger Gale.  The Diabetes UK charity has also been contacted.

A Thanet council spokesman said: “Residents who are registered with us for clinical waste collections have been contacted directly about new charges for the service. Councils have been able to charge for this service for a number of years but until now we have not done so.

“However, in the current financial climate, with ever decreasing funding from central government, charging for certain services has had to be revisited. It was agreed by Full Council in December 2017 that we would need to start charging for this service in order to cover the costs of providing it.

“We have kept the charge to a minimum. It’s not a decision that was taken lightly but pressure on budgets means that tough choices have to be made.”