Campaigners from across Kent will march in a bid to save the stroke unit at Margate hospital this Saturday.

NHS bosses in Kent and Medway have plans to set up three “hyper acute stroke units” in the region — but to close the existing unit in Margate’s QEQM hospital.

Stroke victims in Thanet will have to travel to Ashford for treatment, a distance which, campaigners say, will lessen their chances of survival.

A spokesperson for the Save Our NHS In Kent group claimed the lives of Thanet people will be sacrificed to save on costs.

The spokesperson said: “The official advice is that speed of treatment is vital for stroke victims — so it’s obvious that Thanet people will die as a result of having to travel to Ashford, a long road journey on minor roads. And where’s the sense in closing a stroke unit in Thanet where being an area of high deprivation and ill health stroke victims are likely to be most common?

“We are told local NHS bosses have to act because of a shortage of staff. But what’s causing this shortage? Staff are leaving the NHS because they are demoralised by cutbacks and privatisation. The government needs to halt the privatisation and put real funding into the health service.

“We need to tell the government what we think. Everyone who wants to save our stroke unit and the NHS should come and march with us on February 24.”

A shortlist of options for the specialist hyper acute units lists only the William Harvey Hospital in Ashford for east Kent.

The NHS in Kent and Medway – which includes all 8 Clinical Commissioning Groups – Bexley in south east London and the High Weald area of East Sussex, are now consulting on the proposals. 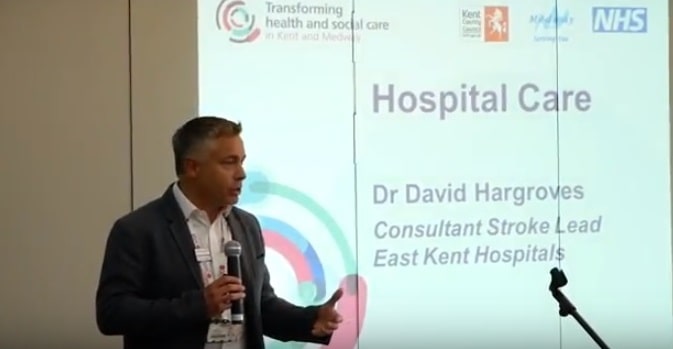 Dr David Hargroves, clinical lead for the stroke review and senior stroke consultant, said: “There is clear evidence that patients benefit most from being treated at a hyper acute stroke unit in the first 72 hours after their stroke, even if that means ambulances driving past the nearest A&E department to get to one.

“We know that patients might currently be able to get to an A&E fairly quickly and the thought of travelling further seems to go against the ‘Act F.A.S.T.’ advice. With stroke, what counts is the total time it takes from calling 999 to having a scan and starting the right treatment.

“Spending 15 minutes in an ambulance but waiting three hours in A&E is worse than an hour in an ambulance going to a specialist unit that can scan you and start treatment within 30 minutes of arrival. It is also vital for patients’ recovery that over those first three days they are seen by a stroke consultant every day, and regularly assessed by specialist therapists – something we can’t always offer at the moment.”

Anyone who wants to attend the march should meet outside the main entrance to Margate’s QEQM hospital in Ramsgate Road at noon on Saturday, February 24.

The consultation on the proposed changes is open now and runs for 10 weeks until midnight on Friday 13 April .

To take part, people can read the consultation document, take part in public meetings and events, and complete an online or postal questionnaire. There will also be specific engagement through focus groups and other work with people whose views are less likely to be heard, and people whose age, ethnicity or other factors puts them at higher risk of a stroke.

Thanet consultation meetings are scheduled for Minster village hall, in the High Street, on March 7 from 2pm to 4pm and Margate football ground, Hartsdown Road, Margate  on February 26 from 6.30pm to 8.30pm.