Dave Haystead says he reported the mess at 2pm on Friday using the form on Thanet council’s website.

But this afternoon the rubbish remained and had been added to by a pile of dumped household rubbish.

He said: “I reported the overflowing recycling bins in the St. Mildred’s Bay Car park at 2pm on Friday using the suggested Thanet council online page. Should I have expected some action before now? It has now been joined by dumped household rubbish spread across the car park.” In September Thanet council advised people to keep hold of their litter and dog waste until they found another bin, or take it home with them, following a rash of complaints of overflowing public bins across the isle.

Cllr Lin Fairbrass, Deputy Leader and Cabinet Member for Environmental Services, said at the time: ““We can all play a role in keeping Thanet the clean and welcoming environment we all want to see. There are nearly 400 waste bins – including dog bins – in Thanet and we encourage members of the public to look for another bin nearby if the one closest to them is overly full, or to take their litter home with them. Bagged dog waste can also be added to any public little bin.” 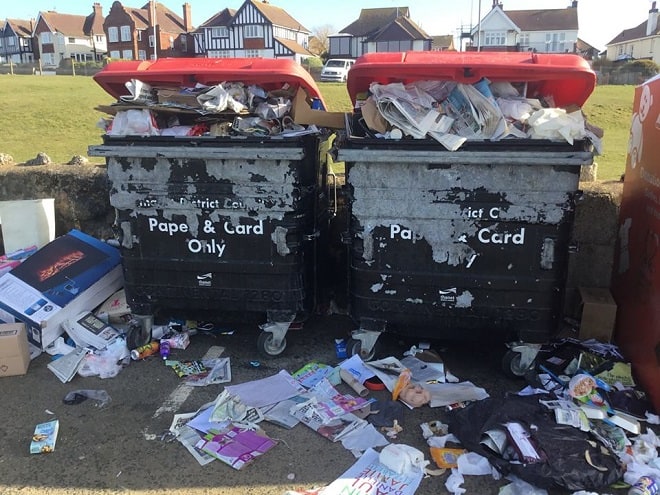 This month new technology was installed into bins across Thanet to alert crews when they are full.

Sensors have been fitted inside a number of bins which can measure how much rubbish has been put inside. Twice daily an automated report is sent to street cleansing HQ with an indication of how full the bins are. This allows the teams to only visit the bins when they actually need to be emptied.

A TDC spokesman said: “The technological innovation allows the street cleansing team to work smarter, directing resource where and when it is needed. This will not only help drive productivity and have a positive impact by increasing efficiency and reducing the number of unnecessary manual bin collections.”

The sensors are currently being trialled in a small number of bins in Broadstairs and Ramsgate.

If successful, they will be rolled out for installation in all suitable bins across the district this Summer.

The Isle of Thanet News has contacted Thanet council to ask when the St Mildred’s Bay bins will be cleared.

UPDATE: The area was cleared at 8am on Monday, February 19

Overflowing bins can be reported to the council here