The distinctive blue top with ‘peer mediator’ emblazoned across the back in large white letters makes it easy for children to identify them during their lunchtime duties across two playgrounds.

There is also a PM information board in the playground with photos identifying the 12 team members so pupils know who to look for when they need their advice.

The clothing was donated by the school’s parent-teacher association which is backing the project, run under the guidance of the Dover and Shepway Mediation Service which is now operating in the area. 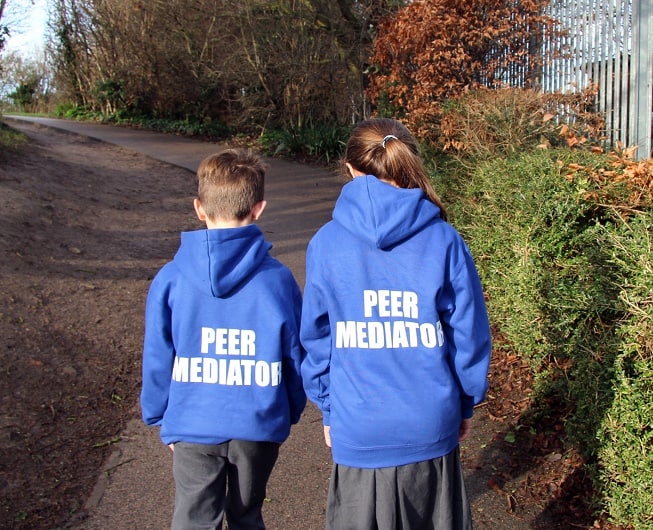 Since it was launched in January the scheme has already been effective with the 12 trained mediators from Year 5 called into action.

Ethan said: “I helped calm down a dispute between pupils after talking to them and finding out what was wrong,” while Mary added: “I was involved with someone who was upset about a friendship but I managed to help them get back together.”

Isabel said: “There was a play fight between three boys and it all got a bit rough so I helped them calm it down,” while Eliseianna added: “I chatted with a girl who was sad because her play friend had gone off with someone else.”

Two members of the team are on call each day on a duty rota system to cover Key Stage 1 and Key Stage 2 playgrounds.

Their role includes listening to disputes and discussing issues with the pupils involved with the aim of reaching a fair and friendly solution. Any situations that they are not confident to deal with are referred to the adult lunchtime playground supervisors for further action.

Deputy head of school Natalie Barrow introduced the scheme to Chilton. She said: “Feedback from the peer mediators, the pupils and staff has been positive. The PMs are working well and take their roles seriously. They are resolving a number of diverse yet common issues children face.”