Dan Thompson is the artist-in-residence at the dig at the Margate Caves site in Cliftonville.

Excavation started on the site today (February 5). Dan will share his day-by-day diary of the dig with The Isle of Thanet News

Arctic winds and hailstorms welcomed the archaeological team to the Margate Caves site. Archaeologists Dan and Jeremy are leading the dig and they will be joined by volunteers from the local community from Wednesday.

The small team started work on the Northdown Road land today, looking to better understand the history of the site before a new visitor centre and village hall for Cliftonville are built.

On Day One, the focus was on mapping the site, to identify exactly where the two archaeological trenches would be dug. The focus is on the front half of the site.

On the @MargateCaves site as artist-in-residence on an archaeological dig. Day one. pic.twitter.com/cQMKHEaSbQ

The rear, with the Caves underneath, will be maintained as a wildlife garden. After some tricky manoeuvring, a two-ton digger was brought onto site by driver Rob, who cleared undergrowth and stripped back topsoil.

Almost immediately, walls and floors from Bryan House, the Georgian schoolhouse that was on the site, could be seen. Floors from the buildings Victorian remodelling are also evident.

Neighbours watched keenly from balconies: they’ll be invited on site to see the dig progress, and the little bits of history uncovered. Finds like coloured window glass, broken bottles, and marmalade jars scatter the surface; reminders not just of Bryan House’s long occupation, but perhaps of its violent end under German bombs. 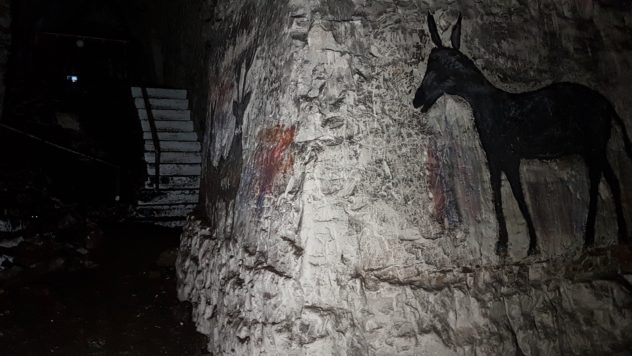 The lease meant the Trust could access a £1m grant  gained from the Heritage Lottery Fund last year alongside the £420,000 granted by the Big Lottery Fund in 2016 for work to get the Caves open.

Following a six-year campaign, The Margate Caves Community Education Trust secured the funding to create a landmark building that includes community facilities such as a cafe, alongside a visitor centre that will provide access to the restored Caves, which were closed in 2004.

In November 2013 The Margate Caves Community Education Trust (TMCCET) was formed and registered with the Charity Commission.

By 2016, TMCCET had prepared full plans to make the Caves safe again, build a new visitor centre with community rooms, and landscape the site over the caves.

Find out more on the Margate Caves facebook page here