The exhibition will show artworks from the 19th century to the present, including film, photography and artefacts. Events across the town will also feature Waste Land inspired art, performances, walks and talks.

In 1921, T.S. Eliot spent a few weeks in Margate at a crucial moment in his career. He arrived in a fragile state, physically and mentally, and worked on The Waste Land. The poem was published the following year and proved to be a pivotal and influential modernist work.

The poem saw Eliot’s personal crisis fuse with the global crises of the early 20th century in the aftermath of the First World War. The poem contains powerful imagery about the social, cultural and spiritual impact of these events. The structure of Eliot’s writing reflects the speed and fracturing of the physical world and embraces the accelerated images of the movie screen, the splintered visual languages of art and the nonlinear narratives of new literature.

Nearly 100 years after its publication a group of Thanet residents have revisited The Waste Land to interpret it anew and examine its contemporary relevance through the visual arts.

Working together since 2015, the Waste Land Research Group have selected all the works in the exhibition, designed the layout of the show, written the exhibition texts and devised a programme of events.

Ranging from people in their 20s to their 70s, the group have brought a diverse range of interests and life experiences to bear on Eliot’s poem.

Journeys with The Waste Land

Presenting more than 60 artists and almost 100 objects, the exhibition is arranged in several areas of the gallery.

This gallery looks at the historic context of The Waste Land . Works by artists such as Paul Nash and Käthe Kollwitz emphasise the devastation felt after the First World War. Other works from the late 1940s and 1950s show how this mood resonated after a second global conflict.

The artworks in this space also pick out key themes of the poem – gender, myth and journeying – that the Research Group used as an initial way to start thinking about how the poem might translate into an exhibition.

This gallery explores the radical form of the poem; how Eliot breaks with a linear or chronological narrative and dispenses with a single voice. Many of the works share the sense of disorientation and isolation evoked by the poem. Other works invite reflection on the fragmentary form of The Waste Land from the perspective of personal identity, as well as in relation to questions about time and space.

This space also examines how developments in science and technology in the 1920s were used by Eliot’s artist contemporaries and how technology continues to fascinate contemporary artists such as Benedict Drew and Nicholas Brooks, and Tacita Dean.

The works in this gallery explore a more literary approach to The Waste Land and consider the poem as text and language. Works by Berny Tan and Vibeke Tandberg are direct responses to the poem, breaking down the language and words that Eliot employs. Wyndham Lewis’ portrait of Ezra Pound (two people closely involved in Eliot’s career) is contrasted with an imagined portrait of Eliot by Philip Guston, who represents the way Eliot and his poetry persists in the mind of an artist.

The gallery also includes a number of copies of The Waste Land owned by artists and members of the Research Group that have been marked and  annotated by their owners showing how the text has been loved and explored.

The works here explore the legacy of The Waste Land with recent and contemporary artists, particularly in terms of cycles of life and nature, of good and evil and death and rebirth. Swedish artist Henrik Håkansson presents us with a tree brutally divided and spliced open, reminding us of our frequent interference with and damage to cycles of nature.

Cy Twombly’s series of paintings Quattro Stagioni (The Four Seasons) suggests a cyclical view of life; what dies is reborn, as spring follows winter, when everything is pulsing with new growth once again. For many artists, including Twombly, the influence of Eliot’s writing has been instrumental in embracing the relationship between poetry and visual art.

What does The Waste Land make you think of? Join the conversation and share an image #icanconnect. Alternatively draw a version of your Waste Land for display.

Be inspired by Eliot and those who helped him edit The Waste Land . Transform Eliot’s words into a poem of your own on the magnetic board. Share what you’ve done #icanconnect

Find out how Margate in 1921 was different to Margate today. Pick up a newspaper produced by students at the University of the Creative Arts.

Relax with a playlist the Research Group have compiled of music that was popular at the time T.S Eliot wrote The Waste Land , and music written since that’s been directly influenced by the poem.

Plan the next stage of your visit by discovering what’s on across Margate. 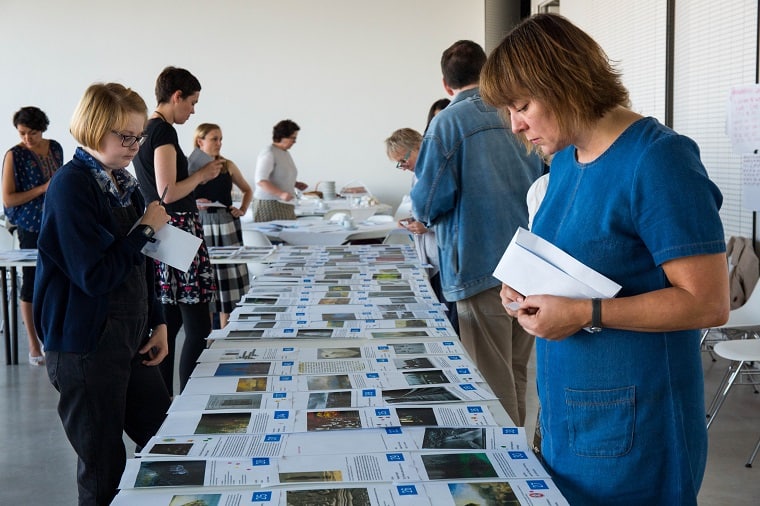 To find out more about the people who have curated this exhibition, join the Eliot Reading Group at 3pm on Tuesdays, take part in Insider Highlight Tours at 11:30am on Wednesdays, have an artistic card reading between 2pm and 4pm on Saturdays, or get involved in the programme of walks and off-site activities happening across Margate throughout the spring.

Take a walk along the seafront towards the station and you will find the Grade II listed Nayland Rock Shelter, the location where T.S Eliot wrote the lines of the poem.

A blue plaque  is due to be unveiled on the toilet block next to the shelter in February.

Pie Factory Margate
*1-6 Feb: A Current Under Sea – seven painters explore T.S Eliot’s The Waste Land in which he alludes to feelings, history, mythology and the natural world
*8-12 Feb: Fragments of the Wasteland – Photographer Eleanor Marriott presents a photographic journey, from London to India and ultimately resting at the shelter on Margate sands.
*17-27 March: Front of House – Turner Contemporary’s Front of House staff present their own work across a wide range of ideas, approach and media
*6-11 April: Mixing Memory and Desire – staff and alumni from UAL (University of the Arts London) respond to T.S Elliot’s work taking as a point the line, ‘Mixing memory and desire’
*20-24 April: Journey of Nutcase 10 – exhibition reflecting the experiences of T.S Eliot and his wife Vivienne who both suffered with mental health difficulties

Margate Museum
3 Feb – 7 May: Hosting two artist installations within cells 1 and 3 of the building –
*Prison, Palace –  mixed-media artwork exhibition by Sława Harasymowicz’s
*Postcards from Margate 1921 – exhibition giving a flavour of Margate in 1921 when T.S Eliot visited

Crate
*3 Feb – 4 March: Different Voice: UCA Canterbury Kent Artist Bank Project – Staff and students will be using the artist book as a means of exploring themes located within the poem
*9 March – 2 April: The Waste Land Salon – inviting the public to participate in re-enactments of the salons delve further into Eliot’s epic poem
*20 April – 7 May: Journeys with ‘The Waste Land’- curatorial space where you can select artworks and create an exhibition experimenting with your own choice of artworks in response to the poem

Nayland Rock Hotel
*3 Feb – 11 March: At the Violet Hour – a focus on myth, gender and facets of the self-artists’ work will re-inhabit and re-animate the empty rooms, spaces and grounds of the Grade II listed hotel

Hantverk and Found
*3 Feb – 18 March: Eye of the Needle – work exploring T.S Eliot’s relationship with the mechanical sound recording of the gramophone
*30 March – 1 April: I Told You There was Something in the Air – exhibition exploring the significance of T.S Eliot’s poem The Waste Land through the visual arts.

Lombard Street Gallery
*3-25 Feb: From Wasteland to Wasteland – exhibition by five artists inspired by an event that happened over 100 years ago exploring and connecting WW1, Margate and T.S Eliot’s ‘The Waste Land’
*3 Feb – 7 May: On Margate Sands – featuring new artworks by five resident artists responding to T.S Eliot’s poem The Waste Land and his association with Margate

Proper Coffee
*3 Feb – 7 May: The Deep Sea Swell – an intimate exhibition of oil paintings and sketches celebrating The Waste Land by T.S Eliot

Liddicoat & Goldhill Project Space at The Printworks, Union Row
*3 Feb – 7 May: Sally Waterman: In The Cage – featuring the work of video artist and photographer Sally Waterman

Turner Contemporary
*11 Feb & 8 April: Landing Place: On Margate Sands – showcasing a range of voices, with new readers alongside experienced performers, and occasional guests give other responses to poetry
*6, 7,20 & 21April: April is the Cruelest Month –
*29 April – On the Tram to Nayland Rock –

Resort Studios
*30 March: Festival of Cats – a celebration of T.S Eliot’s best-selling work ‘Old Possums Book of Practical Cats’, which aims to demonstrate the ways that Eliot enjoyed the psychology, personality and metaphysics of cats

101 Social Club
*14-15 April: You Can Edit Me – an immersive installation inspired by Eliot’s use of landscape, which visitors are invited to move, touch, take, add to or ignore
*27 April- 7 May: Wasted – students from UCA Canterbury Kent use a diverse range of time-based, moving image and print-based formats to respond to the notion of dispossession and other themes found in T.S Eliot’s The Waste Land

Limbo
*21 -22 April: Nothing from Nothing – inspired by the extensive revisions, suggestions and edits made by Ezra Pound to T.S Eliot’s manuscript of The Waste Land, this fleeting, collaborative residency in Margate will examine editing as a creative process

Tom Thumb Theatre
*27 April: Back to The Jazz Age – an immersive cabaret evening dedicated to T.S Eliot and the songs and sounds of the jazz and dance halls of Paris following the Great War
*4 & 5 May: The Wasted Eliot Outtakes