A Ping Pong showdown has taken place at St George’s school in Broadstairs between a young sports ambassador and Sir Roger Gale.

Hugo Ursell, 15, is a Young Ambassador for Table Tennis England. He  also heads a campaign on Twitter where he is billed as the #pingpongpersuader !

Having already played the Minister for Sport, Tracey Crouch, and been called “inspiring” by Paralympic Gold medallist Ross Wilson live on Radio, he is now busy persuading others to play him or just give table tennis a go.

The teenager’s latest challenge was the veteran North Thanet MP. In the run up to the game Hugo said: “Whilst I won’t necessarily go easy on him, I am all about making it fun. So, I will play some competitive points, but I am just as happy to give Roger some coaching on how to up his game. I want people I persuade to enjoy it and want to play again!”

On Monday (January 8) Sir Roger was obviously keen, turning up early to do battle.

Given Hugo’s skills, Sir Roger was happy to be coached by the teen and said he found his morning and the sport great. He also promised to give the game a go every now and then.

Hugo said “I’m really pleased that Sir Roger agreed to play me. I enjoyed rallying with him and think he’s got some potential. I’m happy to keep coaching him whenever he gets a chance. 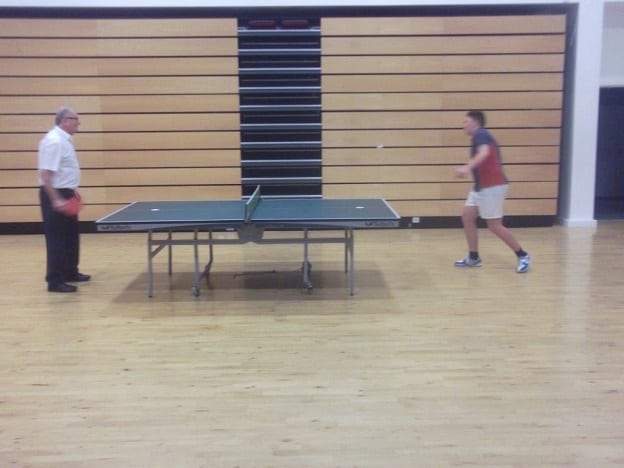 “The fact he found it fun does prove my point: that it is easy to start and fun to play. I would say to everyone – give ping pong a go.”

Sir Roger added: “I thoroughly enjoyed the chance to play table-tennis with Hugo and congratulate him on his work to promote a sport that is fun, inexpensive to participate in and great exercise. I was surprised – and pleased – to discover that ping-pong skills, like riding a bicycle, don`t disappear with age – although I was no match for Hugo!”

Head of PE at St George’s, Greg Wood, said: “It was great to see Hugo and Roger playing here at St George’s. We already know how committed Hugo is. He is a credit to our school in the way he promotes table tennis and an active lifestyle, something we believe passionately in.

“We want to thank Sir Roger for giving up his time to come in to our school and support the work Hugo is doing. We remain really proud of Hugo.”

Hugo has just started his training to become a young coach and plays at Thanet Vikings.

Thanet Vikings TTC meet at St Anthony’s School Sports Hall every Thursday from 5pm to 7.30pm for younger players and 7.30pm to 10pm for junior and senior players.