Margate mum of two Michaela Pocock and her eight year old daughter have to wade through this appalling mess every time they leave home for the school run.

The 42 year old says she has been pleading with Thanet council for three years to have a regular clean up of the alley behind her home in Margate High Street.

Unlike other properties running alongside, Michaela’s front door access is in the alleyway – meaning every time the family leaves the property they have to wade through rubbish, faeces, broken bottles, syringes and even, currently, a burnt out motorbike.

Michaela, who works at The Hoy, has lived at the property above the former Holland and Barrett shop with partner Neil Adams, their daughter, eight, and 20-year-old son, for four years.

She says the property is lovely but the alleyway rubbish is horrendous.

To add to the problems, not a single streetlight in the alley works so the family often have to navigate their way over the debris in the pitch dark.

Michaela said: “The streetlights have never worked. I phoned Kent County Council and they kept saying they would do it but didn’t. I gave up in the end.

“The rubbish wasn’t always a problem. When we first lived here there was a street cleaner called Malcolm who was a real credit but three years ago he was moved to Ramsgate.

“Since then it has just got worse. It has got to the point where me and my husband are cleaning it up anytime we have a visitor. It’s embarrassing and when my nan, who is 96, comes in her wheelchair we can’t get her down there because the mess is so bad.

“I’ve had enough. We pay our council tax, we both work, in fact my husband cleans the streets for Westgate Town Council so he leaves their lovely clean streets and comes home to this.

“There are stolen motorbikes being burnt there, human faeces, needles, smashed bottles, nappies, a homeless guy living one end and another who uses the alley as his toilet. Seriously, I’m going to have a breakdown if this doesn’t get sorted out.” 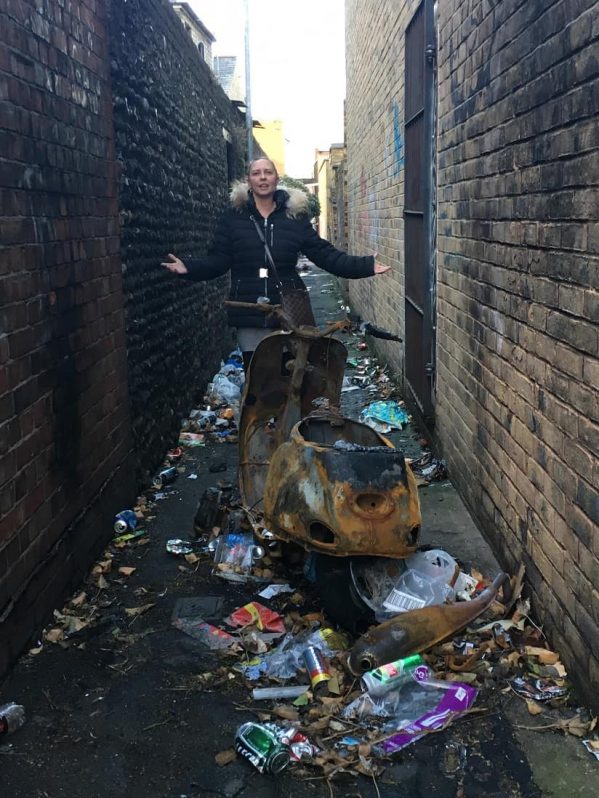 Michaela says she has reported the problems numerous times to Thanet council. A report on December 19, in the hope of getting the site cleared before her nan came for Christmas Day, is apparently still on TDC’s ‘to do’ list, Michaela was told when she went to the offices yet again this morning (January 4).

Ward councillor Iris Johnston has also had no luck in getting the issue resolved and has resorted to rolling up her sleeves and helping Michaela clear up the mess.

Michaela says she has checked deeds and the land belongs to the council but her catalogue of complaints just isn’t receiving any attention.

She said: “I have been to the council so many times, I just want something done but can’t seem to get any action. They should be cleaning it on a regular basis. It is disgusting but it is also dangerous. I’m terrified that my property will go up in flames if another bike gets dumped and burnt there, the fire engines would have no chance of getting anywhere near my property.”

And it seems Michaela is not the only person having issues. Others have also been posting to social media with their own pictures of rubbish strewn streets.

This is my street today in Cliftonville. So yeah, let’s prioritise a royal yacht and then, if there’s any money left over, let’s sort out the piles of crap on the streets of east Kent. pic.twitter.com/R8cOOR6G8b

So @ThanetCouncil I litter picked just a quarter of my street for you today and will again report issues via email/app. But please, we need some street cleaning in Cliftonville. pic.twitter.com/6XJf3fGrKq

A Thanet council spokesman said: “Our street cleansing teams work hard across Thanet to keep on top of this problem and the alleyway will be cleared by this Saturday.

“Littering and fly-tipping are ongoing issues in alleyways such as this one and the council will not hesitate to prosecute those responsible through fixed penalty notices.

“It is important to realise that while the council has a responsibility to remove litter and fly-tipped waste from public property, residents or businesses should be aware that they may be responsible for certain unadopted alleyways next to their property.

“In those cases, it is their responsibility to keep them clear as the council is not responsible for the cleaning or maintenance of private land or unadopted alleyways.

“Residents can report issues with littering and fly-tipping online at https://forms.thanet.gov.uk/forms/form/9/en/fly_tipping – or via the MyThanetApp which can be downloaded from Google Play or Apple iTunes.”