A spirited Wanderers fight back secured a bonus point win and ensured the team remain in second place as the league reaches the halfway point.

Notable changes in Thanet’s line-up were the inclusion in the back line of veterans Tom Longdon at full back, Neil Roby at inside centre and outside half Peter Macaulay. There was a first league start for Toby Rayleigh-Strutt at hooker.

On a bitterly cold afternoon Wanderers made a lively start after kicking off down the slope but Bromley made good use of of the strong diagonal wind to establish themselves at the other end. Wanderers were well aware of the need to make first up tackles after the recent rout in a cup game against Bromley but the visiting backs were causing problems and a couple of missed tackles resulted in a try near the posts after ten minutes. 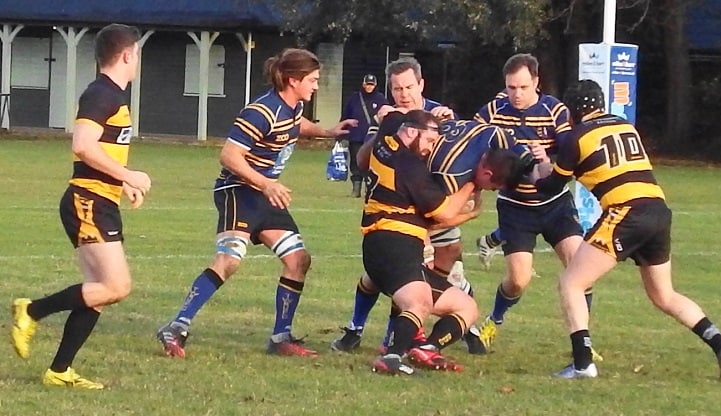 The lead was extended to 12-0 half way through the first half when the ball was spun quickly along the line for a try wide right. A third try looked inevitable but left wing Charlie Knight thought otherwise as he tore from his wing to the other to make a try saving tackle. Wanderers were dominating up front as the half ebbed away but no score came until injury time. Adam Gaddes and fellow lock Kieran Wright were prominent in the drive to the line for number 8 Andy Letts to claim the touchdown. Nick Herbert added the extras for Thanet to trail by 12-7 at half time.

Five minutes into the second half a very long touch from a penalty by Herbert set a good attacking position for Thanet in the right hand corner. The pack effected a powerful catch and drive from the line-out and Captain Brett Scott was the scorer to level things at 12-12.

The ding dong battle now swung in the visitors’ favour when their influential scrum half found a gap in Thanet’s defence to nip in and with conversion make it 12-19. Back came Wanderers as a probing kick from Longdon forced a knock on and more dominance from the forwards brought two penalties, the second of which was knocked over by Herbert. Playing at outside centre today he then raced after his kick ahead to make a tackle and set up Thanet’s rampaging pack in the opposition’s half.

Ground was made with first Joe Carlier and then Dave Lemon punching holes before the ball reached Roby to hand on to Reece Hougham on the right wing who was stopped just short. The home pack’s pressure was again irresistible before Letts touched down for his double and Herbert’s conversion put Thanet ahead for the first time in the match by 22-19. Jay Sanford now replaced Rayleigh-Strutt at hooker after a fine performance from the young hooker. The next try was clearly crucial and it went to Wanderers when quick service from scrum half Lewis Stone followed by a long cut out pass from Macaulay gave Knight some space and he shook off one defender before rounding another to score under the posts and, with Herbert’s conversion, make it 29-19.

Stone, after a lengthy absence due to injury and business commitments, is already playing back at the top of his form. Bromley had been resilient competitors throughout and in the final fifteen minutes pulled out all the stops in an effort to get something from the match. 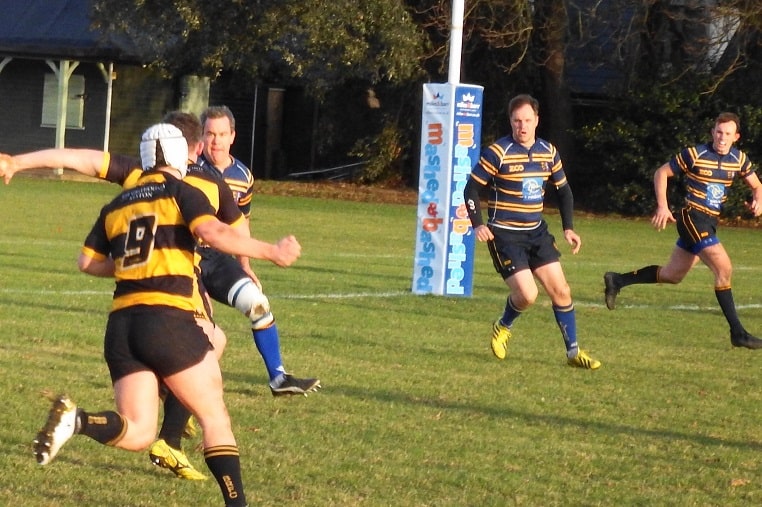 The home defence now was equal to waves of attacks and held on to possession when won. Good drives from Scott and Wright tested the visitors before Herbert’s long range penalty was wide. Loosehead Danny Clement, despite playing through persistent injury now summed up the Wanderers spirit as late in the game he caught and ran back hard before keeping possession. Wright won a penalty with a turnover and Herbert’s resultant long penalty clearance helped see out the final minutes before the excellent referee Paul Shepperd blew for full time.

Forwards Coach Gary Hingley took charge of the side today and was delighted with the way his side stuck to the agreed game plan and produced a true team performance with everyone giving their all. He praised the way the pack dominated with ever presents Carlier, Clement and Letts showing strongly. Possession was well protected and everyone stood up to be counted.

Two tries from Andy Letts capped an outstanding performance, Wright and Gaddes got through a pile of work in the engine room but it was from the ranks of the Vets that he chose his Man of the Match. Open side David Lemon, Neil Roby and Peter Macaulay all made invaluable contributions but it was Tom Longdon who was his choice. He gave an assured performance, fielding infallibly, making saving tackles and launching attacks from deep.

It’s Sheppey at home next Saturday (kick off 2pm). The away match was won 75-7 but despite their lowly league position Hingley insists their will be no change in Wanderers approach to this final match of 2017..

It’s Christmas Jumpers with carols and Christmas songs in the club house after the match.