A photo and video shoot for watch giant Swatch is taking place on the isle today (November 16).

Production company Beast Agency has a crew of 10 taking photos and film of skateboarders James Threlfall, Jesse Thomas and Rhian Evans for use in an ad campaign. 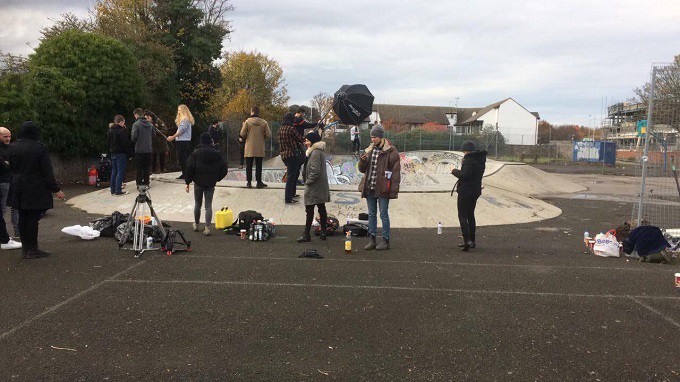 Scenes were captured this morning at the Warre Rec skate park in Ramsgate, where the boarding trio had a giggle at some saucy graffiti on the skate bowl. The crew have now moved on to Margate where they will film on the prom at Westbrook, in Cliftonville and, possibly, at Mill Lane car park.

The filming is expected to be completed by this evening.

It comes a week after crews were at the Lido in Cliftonville shooting scenes for short movie Land’s End.

The film is directed by award-winning commercial director Ben Strebel, and written by Ben Strebel and Natasha Hoare. It’s supported by Creative England through their Emerging Talent fund.

The film is set in London and Kent, and is about the magnetic relationship between a naive young man and a former convict that ultimately ends in betrayal. Joseph Mawle (Game of Thrones, Ripper Street) stars opposite talented newcomer Akshay Kumar.

Producer Alex Blue said: “We absolutely loved filming in the area – it’s my second film in Kent this year! And I’m sure I’ll be back again soon. ”

Find out more about the Ramsgate Skatepark Project, which hosted the Swatch crew, here