The former farm worker packed in his job and gave up his flat in 2014 to walk around the British and Irish coastlines in tribute to his late father and to raise money for the RNLI.

Now he has completed his 9,500 mile journey, raising almost £70,000 for the RNLI in the process, and the thing he is most looking forward to is seeing mum Jackie.

Speaking this morning as he walked the last four miles from Reculver to Minnis Bay Alex, 24, said: “I am looking forward to spending some time with my mum. 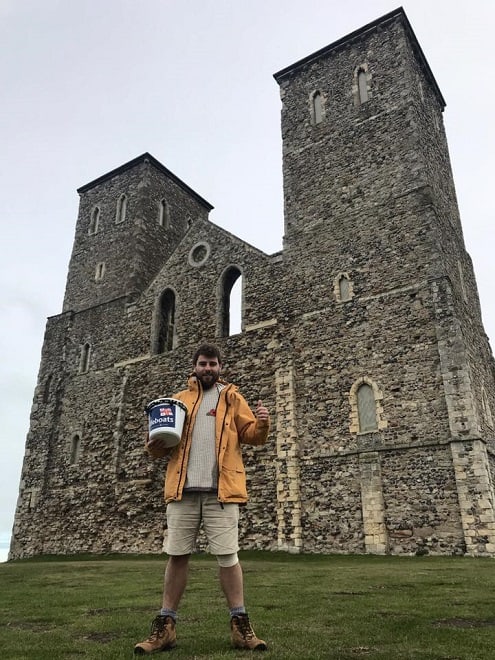 “I also know Margate has changed a lot since I have been away so it will be good to go and see my old stomping grounds and see the new micropubs.”

During the three year journey Alex has visited more than 200 lifeboat stations, slept in church doorways, sheep sheds and bird hides and been chased by bulls!

In the last month, he has walked inland along the Thames, passing stations Gravesend, Teddington, Chiswick and Tower and visited Whitstable station yesterday.

But when he started his mammoth fundraiser on 3 August 2014, Alex had no idea it would take quite so long.

He said: “I didn’t think it was going to take three years. I initially thought 18 months, maybe two years, but underestimated the size of the coast of Britain and Ireland.

The fundraiser was inspired by his father, Sir Raymond Ellis,  who died at Christmas in 2013. Before ill health, his father had spent much of his life dedicated to charity work and fundraising.

Alex left his job, gave notice on his flat and walked out with only what he carried on his back. Since then, he’s slept in a tent he carries with him – or relied on the kindness of strangers. He’s often been put up by lifeboat crew or people who have met him along the way.

His route has taken took him clockwise around Britain and Ireland, including the Isle of Man, the Western and Northern Isles. His initial fundraising target was £10,000 – but he’s bust through that target.

Alex said: “The thing that stands out most for me is the kindness and generosity of people on the way. I have been so well supported and have had an opportunity to meet so many people and so many lifeboat volunteers.”

There were lows on the journey too, When he got to Cornwall Alex had planned to quit and get the train home. But the crew buoyed hos spirits and he continued on his way.

He said: “Falmouth was a rough patch. It was winter and  the winters were particularly harsh. That first one was in Cornwall, the second I was on the west coast of Ireland and it was the wettest winter on record and the third I was in the Outer Hebrides.”

The final stop at Minnis Bay, the place where it all began, signals that Alex is finally home.

He said: “Of all the coast this is where I have the most childhood memories, of walking the dog every morning and evening along the beach. It’s home.”

Alex was greeted at the line by Jackie, RNLI crews, Birchington cadets and well-wishers.

HOW MANY RT & donations can we get before Sat 4 @RNLI?https://t.co/DyaxiKwyYY

The RNLI lifeboat crew volunteers save an average of 23 lives at sea every single day. They receive no government funding for their work and the majority of lifeboat crew are volunteers.

A Margate RNLI spokesman said: “Huge congratulations and a heartfelt thanks to Alex Ellis-Roswell who this afternoon passed the finishing line at Minnis Bay having completed his three-year long walk around the coast of the UK and Irish Republic visiting every RNLI lifeboat station including those on outlying islands.

“This extraordinary story saw Alex cover a total of 9,500 miles and raise (so far) over £64,000 for the RNLI. Alex was escorted over the final stage at Minnis Bay by two drummers from the local Sea Cadet unit, members of Margate’s RNLI lifeboat crew and scores of supporters and friends. 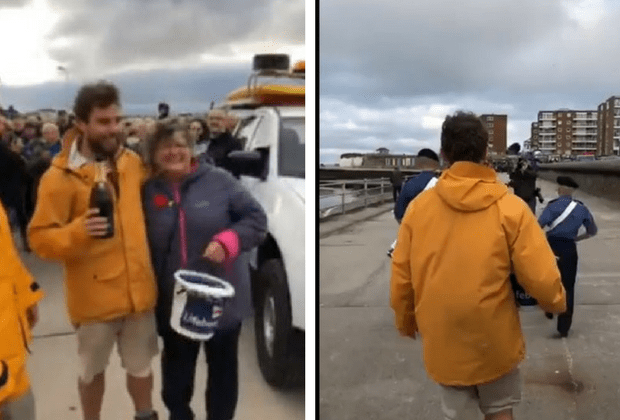 “Also present were representatives from a number of RNLI lifeboat stations who had befriended Alex during his journey. After crossing the line to loud cheers a reception was held where Alex was presented with a commemorative sculpture and certificate of thanks by Nick and Oliver Titcombe, two members of Margate’s RNLI lifeboat crew.” 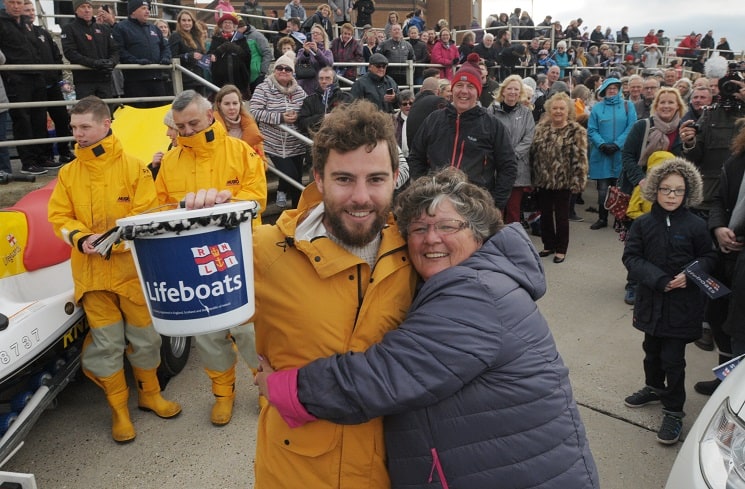 You  can read about Alex’s journey by visiting his Facebook page www.facebook.com/alexellisroswell or by following him on Twitter @ELLISROSWELL. His fundraising page is: www.bt.com/DonateToLifeboats.