Walking football in Thanet started in 2014 with the launch of a 6-8 week pilot of training sessions at Bay Point Sports Club using start-up funding from Thanet District Council. The funding meant proper training could be provided by qualified FA coach, John McKellar, with the support of Total sports coaching, a Thanet-based  company.

From those humble beginnings, training sessions have grown in size and developed into an affiliated club catering for people aged 50 and over, of any ability. In its three-year existence, there have been lots of success stories including tackling mental health issues, reducing weight loss, blood pressure and helping rehabilitation with existing injuries.

TDC has continued to be an advocate for the scheme and has funded additional sessions at Ramsgate sports club under the ‘Sport 4 Life’ programme. The authority has also contributed funding to support another session at the East Kent Indoor Sports Centre with the support of the Sticky Wickets Sports Bar. 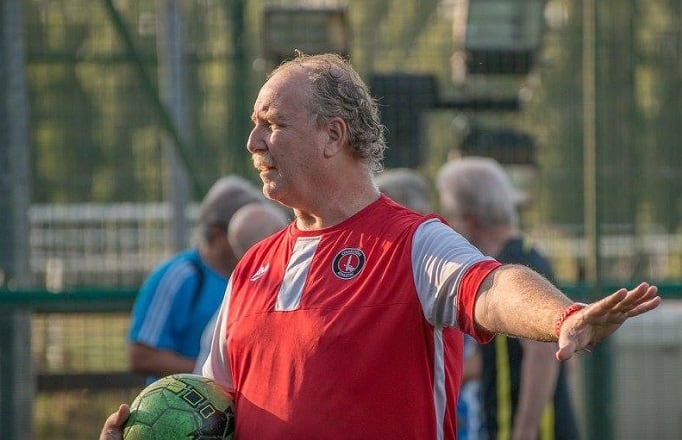 Head coach, John McKellar has been the lynchpin in the club’s success, and explains how the first training session held in torrential rain has developed into a thriving sports club.

“I can remember my first training session at Bay Point as if it was yesterday, when I wasn’t hopeful as the weather wasn’t being kind, torrential rain was the order of the evening! I set up the pitch ready for training and waited and waited and was about to pack up and go home when a couple of people turned up, followed by another four – so now I had my first six players – enough for a team! Due to the weather, I gave them a choice of going to the bar for a chat or playing, and the unanimous response was, ‘let’s play!’

“Now 3 years on we have more than 20 players every Monday evening and a membership of 35 plus. We’ve won several cups, tournaments and awards and made great connections with other walking football clubs around Kent and further afield.

“Walking football has had many positive outcomes at Bay City Strollers – from getting people off their settees, being active and keeping people fit to helping with injury recovery. There are also the benefits to social wellbeing as the Bay City Strollers has helped people form many new friendships.

“Our membership numbers are increasing every week and the future looks very positive. None of this would have been possible without partnership working from many different organisations and Thanet District Council’s Sports Development Unit.”

Councillor Rev Stuart Piper, Cabinet Member for Housing and Open Spaces, said: “It has been fantastic to see the Bay City Strollers Walking Football Club go from strength to strength. Walking football has now become a valuable outlet for those over 50s who want to keep active, be sociable and importantly, have fun!”

To find out more about the club, visit their website at: http://baycitystrollers.co.uk/