On a mild, overcast afternoon at Crowborough, Thanet Wanderers welcomed back Henry Mirams on the left wing from university in Swansea and Charlie Knight in the centre after his brief sojourn at Canterbury, but were still without first choice hooker Neil Wakefield and influential fly-half Peter Macaulay.

Jay Sanford was an able deputy in the centre of the front row and Nick Herbert moved from centre to the number ten position. Thanet started positively with several forays into the home side’s half and after four minutes were awarded a penalty for a high tackle on Jason Morbey which brought to an end a promising thrust down the centre of the field. Although this was missed it was followed two minutes later by a further infringement, this time in the ruck and  Herbert landed the kick from between the 22 metre and 10 metre lines to give the Wanderers an early 3-0 lead.

Although Thanet were uncharacteristically being pushed backwards in the scrum they continued to press into their opponent’s half and on 13 minutes after a line-out on Crowborough’s 5 metre line, followed by several pick and drives from the forwards, Adam Gaddes touched down for a try which was converted by Herbert, putting Thanet 10-0 ahead. This was followed by 10 minutes of scrappy play with neither side being able to exert any dominance, except for an excellent break through the centre by Morbey which came to nothing when a high pass to Charlie Knight slowed him down and he was tackled by the home side’s defence.

Crowborough were committing quite a number of offences and in this period were spoken to by the referee and given a warning. On the 23rd minute quick ball from James Langridge at a ruck allowed Morbey to get the ball out to Knight who with his speed broke through the home side’s back line and passed to Reece Hougham who was only stopped by a thumping tackle from Crowborough’s full back.

Knight following up, kicked the ball towards the try line and outsprinted the remaining home defence to collect the ball and score. Thanet were now ahead 15-0 after the conversion was missed. Another penalty against Crowborough was one too many for the referee and he issued a yellow card to the home side’s number 8 who spent 10 minutes in the sin bin. Isaac Roe was steady and secure at full back.

The Wanderers back row of Warren Riddell-Broomfield, Dave Lemon and Brett Scott were very active in the loose winning turnovers of opposition ball on a number of occasions and after some further good work they got the ball to Morbey who broke through the home line before releasing Knight who raced to the line for his second try. The kick for the extra two points failed, but the score was now 20-5. Thanet then seemed to go to sleep for ten minutes and allowed Crowborough to come back into the game. Just before the break the home side’s efforts in the scrum were rewarded when they scored an unconverted pushover try from their number 8. 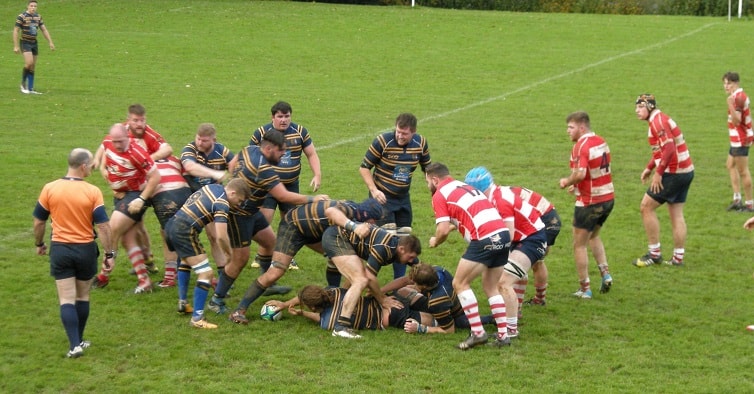 Thanet started the second half with a bang and on 45 minutes a clever pass from Herbert to Morbey allowed the latter to burst through and score under the posts. The successful kick made it 27-5. Crowborough now had a successful 20 minutes. On 55 minutes an ambitious pass by Herbert was intercepted by Crowborough’s fly half who ran 60 yards to touch down and cap the move off by kicking the two extra points. Five minutes later a move by the home side’s backs caught the Thanet defence out of position and Crowborough scored an unconverted try in the corner.

After this, play became broken and scrappy from both sides and the only highlight was a successful penalty by Herbert which made the final score 30-17 in Thanet’s favour. Coach Tom Carlier was happy with his team’s first half performance, but said the second half showed there was still much to work on. Tom’s man of the match was Nick Herbert.

Report and photos by Peter Ruranski