Ramsgate’s Royal Temple Yacht Club, one the UK’s premier yacht racing venues, concluded its racing season on October 22 with a blustery final decider for both their IRC racing classes and the cruiser classes.

With a season running from April and covering 5 main series, yachts competed over local and offshore courses in channel waters off the Thanet coast and as far afield as Belgium and France. It’s been a vintage season with many new entries to an already highly competitive fleet. Twenty-seven local yachts crewed by several hundred yachtsmen and women battled it out in a range of conditions and vied for places with results often decided by a few seconds. 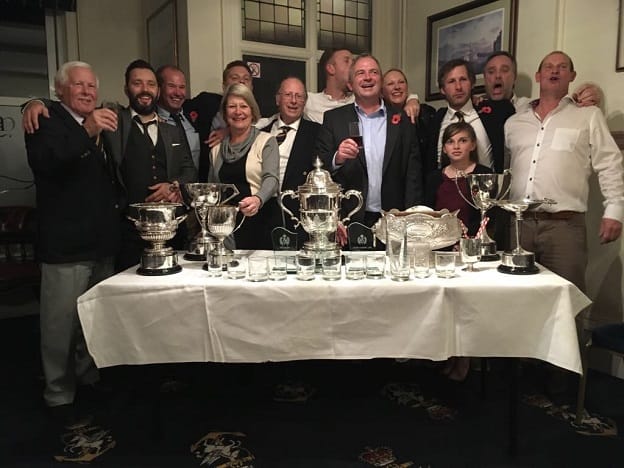 The early leader in the cruiser classes in the first of the Sunday Spring Series races was Frank Barratt’s Elan333 ‘Maverick,’ winning the first two races and John and Michelle Stoneley’s ‘Pippy’ and Andy Ketteringham’s Class 4 Robber ‘Daylight Robbery’ taking the other series wins.

IRC racing class was again led early on by ‘Cobra’ but the very tight competition led to the individual race spoils being shared amongst a number of teams with Kym and Heather Leatt’s Corby 36 ‘Kylla’, John Barratt and Paul Woodward’s SJ320 ‘Slingback’, and Mike and Jo Brand’s X-34 ‘Foxy’ also accounting for numerous wins.

With the Summer, evening and championship qualifying Offshore and Autumn Series races nearing an end, ‘Daylight Robbery’ had wrapped things up in the cruiser classes. But in IRC classes, the Autumn Series and the overall Club Championship were still to be decided.

‘Cobra’ led the championship but needed to keep in touch in the Autumn Series to fend off ‘Only Magic’, Kylla’ and ‘Slingback’. ‘Slingback’, with improved boatspeed since the Summer’s Ramsgate Week Regatta, had the bit between their teeth but were frustrated by Class 1 yachts ‘Assassin’ and ‘Slingshot’ keeping them off the top of the podium. ‘Kylla’ was next to lead the fleet home but it was a win in the penultimate race of the season that gave ‘Cobra’ the series and with it a clean sweep of the qualifying series’ and the overall championship.

Due to the popularity of the racing at the RTYC, it is expected that next season, the fleet of predominantly local boats will be joined by visitors from other UK ports and overseas, adding a cosmopolitan feel to Ramsgate’s racing scene normally reserved for the annual Euroregatta and Ramsgate Week events.