There was a welcome return  for captain Chris Hood in the second row after a lengthy absence due to injury.

Canterbury had the brisk breeze at their back as they played up the slope in the first half but Wanderers  were first on the board after 15 minutes through an unconverted try from influential Number 10 Tom Longdon. An ailing Arek Arkadiusz had to withdraw to be replaced by the side’s Head Coach Andy Ballen fresh after celebrations in New York.

After a long delay while an injured  Canterbury player received treatment it was the visitors who were soon back into their stride. Two unconverted tries within five minutes, the second as a result of an excellent cross kick, took them into a 10-5 lead. As half time neared a penalty set Thanet on the attack and after a good build up it was scrum half Harry Highgate-Royce who touched down to make it 10-10 at the break.

Wanderers brought the momentum of the close of the first half with them to the opening of the second and seven minutes in Longdon spotted a gap and Paul Moat finished off a nice piece of attacking rugby. Longdon added the extras and ten minutes later he made it 20-10 with a penalty resulting from a powerful Thanet scrum on the opposition’s put in being pulled down. It soon became 25-10 when following a good build up between Warren Riddell-Bloomfield, Ballen and  Moat, Hood stretched a long arm to touch down on the line.

The Captain recorded a notable double seven minutes later after good work wide left committed defenders and he was quick to power through the gap. Thanet’s final try came courtesy of a training ground move where a strong scrum was the basis of a blind side move that freed winger Louis Marshall to speed in down the right touchline and finish near the posts for Longdon to convert and make it 39-10 to Thanet. It seemed to be a conclusive scoreline but Canterbury had other ideas and in a six minutes spell ran in three tries with two conversions before the final whistle blew to bring relief to the tiring home fifteen. who were delighted winners by 39-29.

After the game Ballen spoke of his pride in the team’s performance that brought a victory based on determination and invention. There was a big performance from Highgate-Royce on his final match before leaving for Australia. He will be missed,

His half back partner Longdon always looked dangerous with the ball in hand and orchestrated a rewarding afternoon for the backs. Hood with his two tries made the headlines in a dominant performance from the pack where Riddell-Broomfield and Toby Rayleigh-Strutt were also prominent.

The 2s continue their run of home fixtures with a match next Saturday against Gravesend 3s who are currently second in the league. Kick off is 2.30pm. The first XV are away at Crowborough and the 3s are also away versus Tonbridge Juddians. 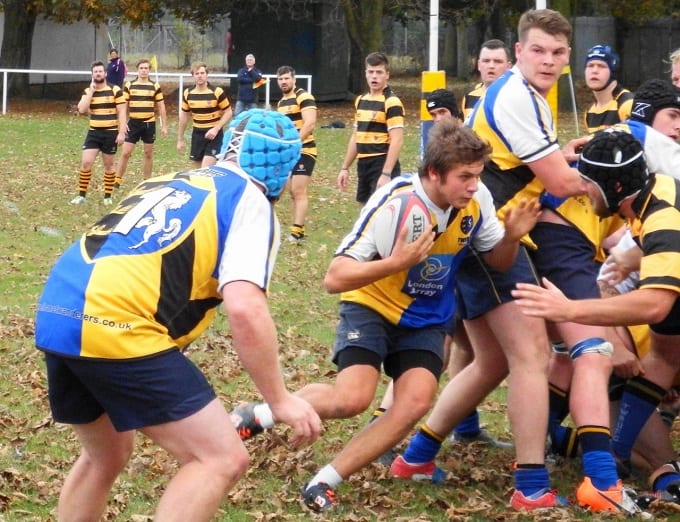 A special mention for Wanderers physio Monique Boorman who was kept busy providing cover for both sides in this match as well as providing emergency cover for the Thanet 3s who also recorded a victory against Canterbury on a neighbouring pitch.

What does the first team coach do on an unexpected free afternoon? Tom Carlier was to be found running touch in his role of front row sub in this match,