A big-hearted Ramsgate marathon runner halted his own run for the finish line at a major race yesterday (October 15) to help a struggling contender complete the course.

Simon Ballard, who is the president and coach at Coastal Striders running club, was taking part in the Birmingham Marathon as a qualifier for next year’s London Marathon but when he saw runner Ollie Haden literally losing his legs he postponed his own race to help.

Simon made sure Ollie completed the remaining two miles so he could get over the finish line and collect his medal.

Dad-of-three Simon, who ran his first marathon just three years ago, said: “I saw him being held up by two spectators and there was still two miles to go. I told them I would take him. He was coherent but his legs had gone and he just couldn’t do anything on his own. If you do not get to the finish line you don’t get the medal and I know how gutting that is so wanted to get him to the end. 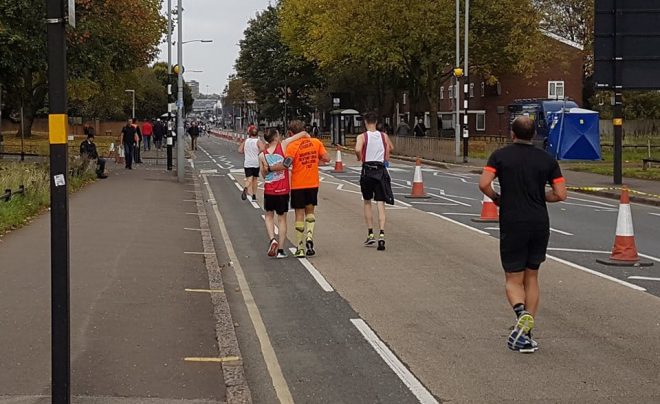 “The event staff were brilliant, when we passed the St John Ambulance they asked if he was ok and then radioed ahead so there was a medical team to meet him at the finish.

“About half a mile from the end his sister was in the crowd and she helped to carry him over the finish line.

“He was quite embarrassed and convinced he was the last runner in the race. As we were not even on four hours he was a long way from being the last one!”

Simon, 42, said there was never any question of not helping Ollie to the finish line. Although he had already given up on achieving a personal best in the race Simon said he would have stopped in any case.

He said: “The ethos of our running club is that we do not leave anyone behind. It was really the reason I got into coaching as there wasn’t much on offer for the amateur runner so I coach to help people get to where I am now.

“When our club runs at events we always finish and then go back to help anyone doing their first event so they can get to the end, it’s just what we do. It’s not in my nature to leave someone like that. There were other runners who stopped but then they were looking at their watches because of their own time. If it happened again I would do it again because I have been there and made mistakes in marathons. My first marathon was in Brighton, which I have run for the last three years, but that first time I made every mistake possible.”

Simon and Ollie made the finish line with a time of just over four hours. Ollie is now recovering and has since messaged Simon to say his help has inspired him to put his running shoes on and give it another go.

Simon, who has now run eight marathons and an ultra-marathon, said: “The most important thing is that he is ok and is going to try again.”

Coastal Striders members have expressed their pride in Simon’s actions. Club member Les Brown said: “Simon is special and we are fortunate to have him as president of our club. This marathon is a big thing for a lot of people so to stop for someone else and take them the considerable distance of two miles is a special thing to do.

“Simon’s example is typical of the support and encouragement you’ll get from running with a crowd of great people (in Coastal Striders).”

Simon is now preparing to take part in the Cake-a-thon marathon at Betteshanger next week. Runners in the Saxons, Vikings and Normans club race run on a 4.3 mile loop, and also bake a cake for the event!

Simon said: “A couple of club members are taking part so I said I’d do it too and support them. Last year we won the cake competition!”

Coastal Striders is a club aimed at runners and about-to-start runners of all abilities. It’s free and it’s based in Ramsgate.

To find out more about the Coastal Striders click here

Ollie Haden was running in aid of the Brain Tumour Charity. Find his justgiving page here