A Margate fireman who helped save lives on two separate occasions is among the Thanet firefighters who have received awards for their dedication and bravery.

Kent Fire and Rescue Service (KFRS) held a ceremony in Maidstone this month to recognise firefighters who have served across the county for 20 years, members of the public and KFRS staff whose bravery has saved lives, as well as KFRS volunteers.

Margate crew represented by Kevin and colleagues Steve Quincey, Andy Wright and crew manager Stuart Plumridge were commended for their part in the rescue of two men trapped on the rocks in the sea at Walpole Bay in May.

With no time to spare they acted quickly to locate and rescue one man and helped a second out of danger and into the lifeboat. Without their selfless act of valour both men could quite easily have been washed into the sea and lost their lives.

Kevin was also being recognised, along with his partner Laura Walther, for their part in the rescue of a distressed young woman from a cliff edge.

Kevin was off duty and walking with Laura along the seafront in Ramsgate, when they saw that a woman had climbed over railings and was on a cliff edge in a distressed state.

While Laura phoned 999, Kevin placed his legs through the railings, wrapping them around the young woman until support arrived.

His quick-thinking prevented the woman from jumping or falling down the cliff.

Kevin and colleagues were presented with the Chief Executive’s Certificate of Congratulation. 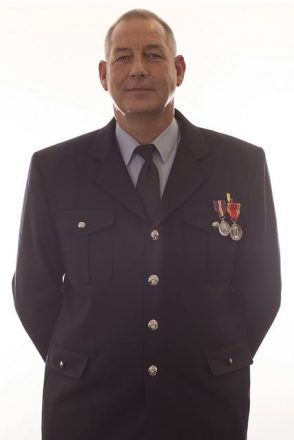 Long service  and good conduct awards went to  Robert Petitt (above) , who joined after a career in the Royal Navy, in 1997 as a retained firefighter in Margate and became a wholetime firefighter in Thanet and then Margate and  David Escudier (below with wife Nikki), who is currently Group Manager for South Kent. 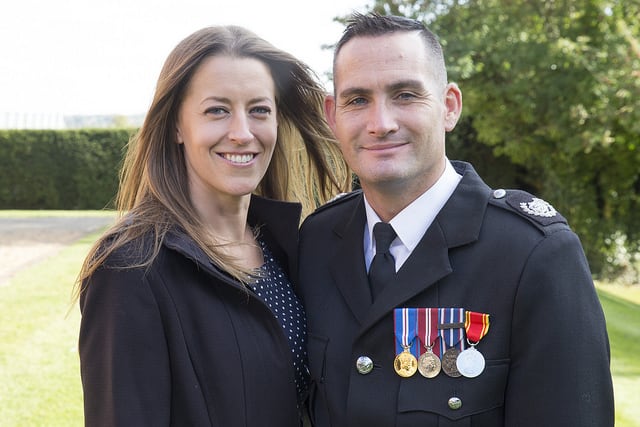 As part of the marine operations team he was winched by Sea King Helicopter to tackle a fire on a ship six miles off Margate in 1998. He led the KFRS Drone project and played a key role in working with the ambulance service to develop our medical emergency response. His wife Nikki is a Watch Manager in Ramsgate. 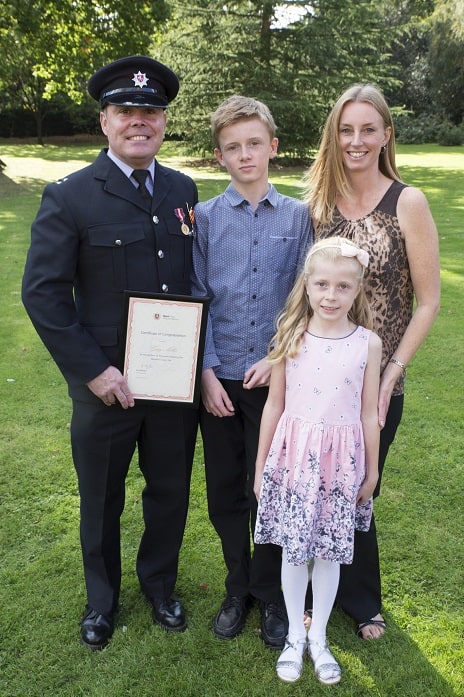 Gary Miller (above with family), who is currently temporary Watch Manager in Margate as well as a Technical Rescue Technician, also received the award.  He has worked in numerous stations including Dover, Thanet, Margate, and Strood. He also received a certificate of congratulations for his involvement at Grenfell Towers. 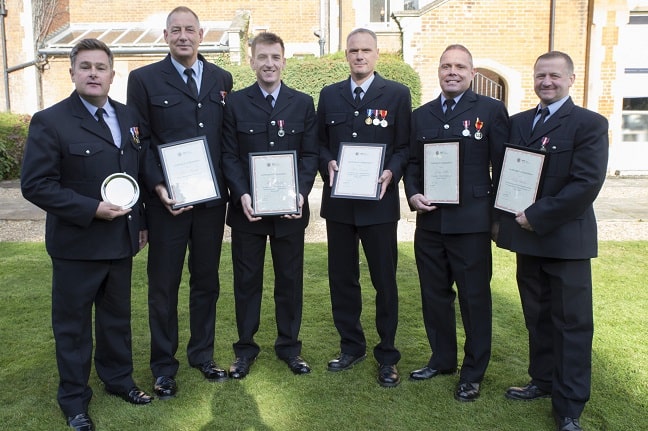 Firefighter  Martin Pritchard (far left of Margate group picture), regional charity representative, received an award from the Firefighters charity as Margate raised the most money in the region at the station car wash back in March 2017. 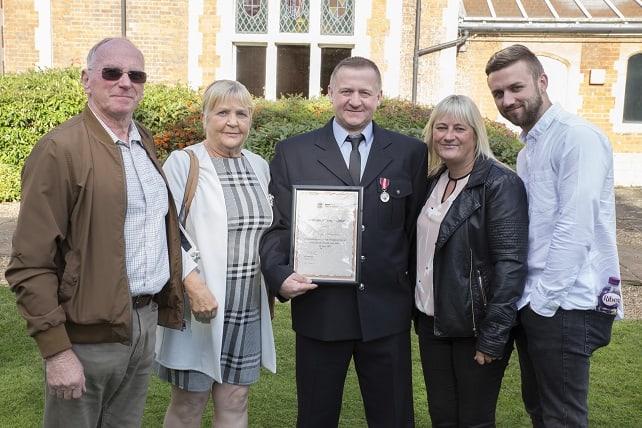 Firefighter Tony Palmer (above) received a certificate of congratulations from the chief executive for life saving actions at an incident.

Tony is a firefighter in Margate as well as a co-responder providing assistance in medical emergencies.  In his co-responder role he was called to help a woman who had been struck by train at Margate train station.  Tony was first on the scene and provided emergency first aid to the lady who had suffered terrible injuries.  He remained with her at the trackside, providing assistance to the paramedics and support to the casualty during her ordeal.

Ann Millington, Chief Executive of KFRS, said at the ceremony: “This annual awards ceremony gives us the chance to mark the courage and hard work of extraordinary people. We are marking twenty years of dedicated service by firefighters, as well as highlighting the exceptional actions of members of the public and the wider KFRS family.”