A 12-year-old from Margate amazed more than 200 professional photographers when his stunning pictures were displayed on a huge screen at an awards ceremony in Leicestershire.

Hartsdown pupil Jamie Horton was one of the guests at the Master Photographers’ Association (MPA) awards ceremony  this month after chairman Ray Lowe spotted his brilliant images on the BBC and then The Isle of Thanet News website.

Jamie first started taking photographs when he was just four-years-old. He was then advised by renowned transport photographer – and former colleague of his dad John – Colin Marsden to upgrade. Jamie then got his first professional camera at the age of seven.

His work has recently been displayed at exhibitions in Thanet and adorns the reception area at his school.

Mr Lowe was so impressed with Jamie’s work that he contacted The Isle of Thanet News for help getting in touch so the youngster and his dad could be invited to the annual ceremony.

Photographers at the ceremony were “absolutely amazed” when Jamie’s landscape images  were displayed on the screen, said Mr Lowe.

They were also impressed by his mature attitude when Jamie stated that creativity comes from inside the heart and mind of the photographer, the camera being just an instrument to create with.

In recognition of his outstanding work, he was presented with a professional photographic printer by Epson UK so he can produce quality prints from his images for any future exhibitions. 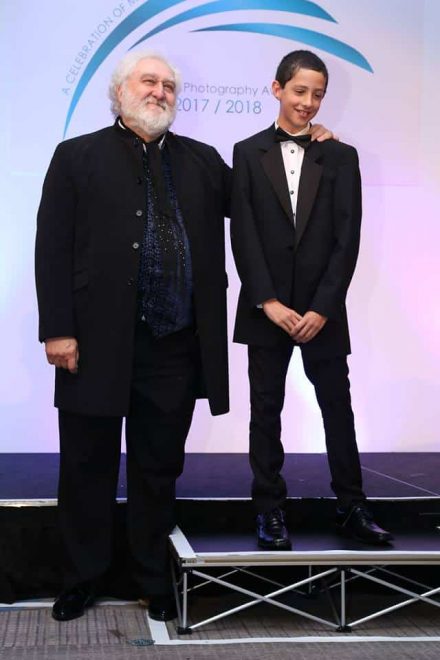 Ray Lowe Hon FMPA, chairman of the MPA (pictured above with Jamie) said: “ It was a humbling experience to see Jamie’s images which were far better than many photographers who have been shooting for years with far better equipment.

“It was also a privilege to meet such a pleasant young man with such maturity, I know he will go as far as he wishes in life, with his skill and determination. It was a pleasure to have him as our guest.”

Jamie said: “I wasn’t expecting an award. Mr Lowe started talking about a personal experience and suddenly I heard him say “BBC” then “A 12 year old boy from Margate.” I only knew then that something was going to happen.

“He called me to the stage and suddenly my pictures went up on the big screens all around the room. It was frightening.

“Then we had a laugh, he kept asking me if I believed in Father Christmas, I kept saying no and everyone laughed.

“He then gave me a gold envelope and told me the man from Epson – Nick – a sponsor, had given me a printer. Suddenly a woman in the front row got up and came on stage. She was another sponsor and gave me a VIP  pass to an event in London in January which I need to be at for one whole week

“I have also been asked by another sponsor “One Imaging Limited” for my best picture, as they are going to print it big for me and the owner of TImeLine Events is arranging an VIP Pass to a photo experience at Didcot Railway Centre.

“While we were there I went to special talks by professionals in  photography – Simon John and Darren Woolway. Darren is a commercial photographer from Maidstone and I want to do what he does when I am older. I learned a lot from the two days there and met some wonderful kind people.

“I now want to put into practice what I have learned and get better at it. I definitely want a career in photography and am aiming to go to university.”

And Jamie had a special word for his biggest inspiration – his dad. He said: “He works so hard teaching me. He kept saying to me’ Jamie this is your day enjoy it.’”