Injuries sustained last Saturday had already caused selection problems for Wanderers. News that influential Captain Brett Scott was a late withdrawal, due to his sky dive being delayed, caused another re-shuffle with veteran Number Ten Neil Roby joining the bench.

The best crowd of the season so far saw Thanet weather strong pressure from their opponents before pulling away in the second half.

Folkestone kicked off up the slope with a strong breeze behind them and were soon 7-0 up after some hesitant home defence. A penalty minutes later from Nick Herbert made it 7-3 and Folkestone went close but were denied by good home defence.

Wanderers pack set a promising position and Alfredo Furmanek broke well before Isaac Roe caught confidently and ran back deep into Folkestone’s half. Herbert chipped further away at the lead with another well struck penalty and looked to be through moments later before being hauled down.

Thanet were frustratingly gifting possession through errors and a glut of penalties. Big tackles from Reece Hougham, Gareth Redmond and Jay Sanford stemmed Folkestone advances. A powerful Thanet scrum led to a penalty which enabled Herbert to give Thanet the lead but a further score was denied them as they were penalised for crossing so at half time it remained 9-7 to the Wanderers.

Stuart Plumridge had received a knock and whilst he was off for assessment Roby once more gave an assured performance for the first XV.

Early in the second half another promising Thanet attacking position was lost when a penalty was conceded and Folkestone launched a series of forays into the home half. Redmond made a fine clearance and, in more good defence, there were crunching tackles from David Lemon, Warren Riddell-Broomfield and Plumridge.

The game was still in the balance when Hougham picked up a loose ball and headed for the distant Folkestone try line. The visiting scrum half did well to catch and bring him down metres short but Furmanek was in support to round it off  Kieran Wright now made way for Alan Easter, a Thanet favourite who is sadly too rarely available. Plumridge returned Folkestone’s restart with interest but Thanet could not break down the visitors’ defence until ten minutes later. 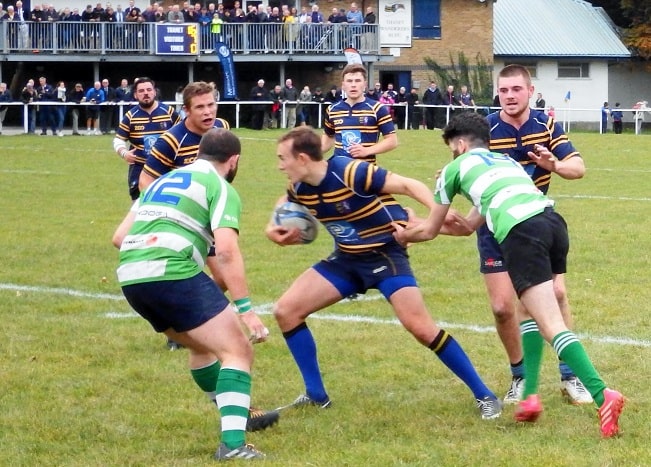 Wanderers forwards had a fine afternoon and another unstoppable drive now took them over for Andy Letts to chalk up one for the pack wide left. Folkestone replied with a quality rolling maul of their own and a penalty set an attacking position close to the home try line but the line was held and finally a knock on allowed the clearance. Peter Macaulay rolled back the years with a vintage break and when he was caught Hougham took over to race in for try number three. Herbert made another excellent conversion for 28-7.

Hougham had again impressed but now made way for the closing minutes for Nathan Stout. Wanderers pushed for the bonus point fourth try but there was to be no further score and the match ended at 28-7.

Head Coach Tom Carlier was delighted with the result but rued the regular gifting of possession to a useful Folkestone side with some talented backs. The front row of Sanford flanked by Joe Carlier and Danny Clement was again outstanding throughout the eighty minutes but the Man of the Match was lock forward Adam Gaddes who stepped up as Captain and lead by example with a fine display.

Wanderers have a bye in the first round of the RFU Senior Vase so there is no game for the first XV next Saturday. The 2s and 3s have scheduled fixtures at home versus their Deal counterparts (Kick Off 3PM) All support welcome. The Veterans start their defence of the Spitfire Gold Cup Veterans Trophy with a tough away fixture against Maidstone on Sunday (Kick Off 2.30pm).

Their Captain  Elliott Stokes was pleased to see the five of his side who played against Folkestone come through unscathed.