Sixty-five homes could be built on agricultural land at Cliffsend.

The proposal, due to be discussed next week by Thanet council’s planning committee, is for land east of 40 Canterbury Road West owned by Edward Spanton Farms.

The scheme is for Up to 65 new homes, 30% of which would be affordable. The affordable housing would be a range of flats and houses with both rented and shared ownership properties available for families and single households.

It also includes open spaces, a play area, a contribution towards a new footpath to the Thanet Parkway Station site and cycle paths. 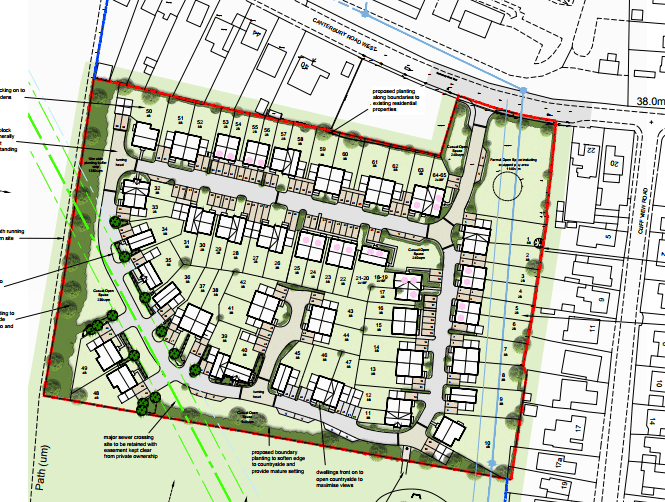 A planning statement for the scheme, which will be sited across from the Jentex site, says: “The proposal has been carefully considered to facilitate an integrated and sustainable layout within its landscape setting. The development will contribute to the retention of families in the area by providing a range of family housing and affordable homes that deliver a high quality residential environment, which is both distinctive and complements the character of the settlement.

“ Improvements would be made to accessibility and public transport, with links to the proposed Parkway Station which would be secured through financial contributions. A well-conceived access arrangement is proposed through the creation of new access from Canterbury Road West.”

But dozens of objections against the plans have been lodged with Thanet council. Objectors say the build will bring an ‘overbearing impact’ on the village which does not have a GP surgery or a school.

Residents also say the development will bring an adverse increase in traffic and have raised concerns over the use of agricultural land rather than a brownfield site. The parish council says: “The village is becoming overdeveloped. An increase of 160 properties has already been agreed and these developments are an increase on this number.”

Objectors also say the number of houses departs from the current Local Plan and is much higher than the 40 homes earmarked for the village in the draft local plan.

If the application is approved the developer will have make a financial contribution of £197,778 towards Phase 2 of Birchington Primary School expansion; £140,408.10 towards Phase 1 of Ursuline College expansion works and £3,121.03 towards book stock at the local library.

In a report to councillors the planning officer says: “The proposal constitutes sustainable development, as any harm is outweighed by the significant economic and social benefits, and the development supports the direction of the emerging Thanet Local Plan.”

The recommendation is for Members at the planning committee meeting on October 18 to defer and delegate the application for approval.