Literary gatherings have been popping up left, right and centre – I go to quite a few of them myself – and there are now more LitFests in Britain than you can shake a stick at. But none, I feel confident in saying, are quite like our own homegrown BroadstairsLit – a collection of writing-inspired and book-themed events that will last not just for the weekend, Ladies and Gentlemen, nor even a full fortnight but – all through the year!

Conceived over a series of mineral waters, coffees and the odd gin (that was me!) the model has taken a bit of tweaking but we now have a line up of stalwart volunteers (step forward Denise Martin-Harker of Dickens Festival Fame – if you went along to this year’s extravaganza you’ll know this lady can organise with bells on! – and Lee and Jacqui Wellbrook, the powers behind all sorts of good local events and her right-hand men for the above). I am to be the resident interviewer (nothing I like better than the sound of my own voice and the weight of a mic in my hand)  and we kicked off with our first event back in June. 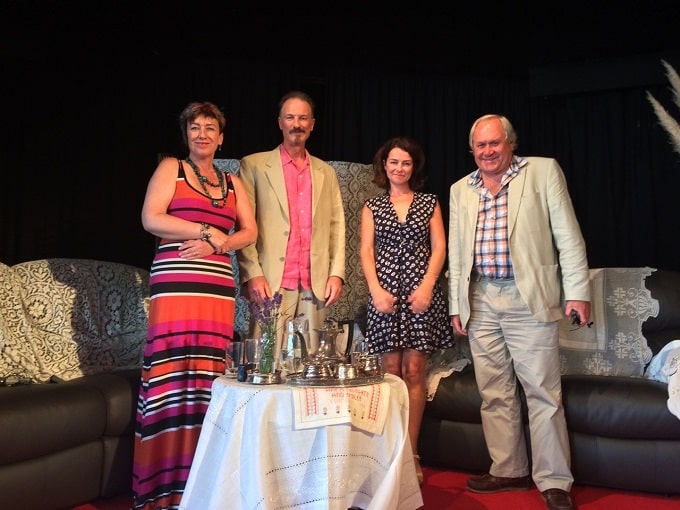 ‘A cup of tea with The Archers’  was a sell-out. I am passionate about the long-running radio four soap but even I was surprised at the depth of devotion filling the Broadstairs Pavilion when scriptwriter Keri Davies joined the beautiful actress Annabelle Dowler who plays Kirsty Miller, and Trevor Harrison, the actor behind Eddie Grundy, to talk about life in Ambridge. One hundred and eighty happy beverage-drinkers listened enthralled  as Annabelle spilled the beans on whether Kirsty really goes in for a proper snog or simply kisses the back of her hand during love scenes, Keri explained the reason why so many of the characters speak with their mouths full and Trevor Harrison – delighting the audience with a burst of his Eddie voice – shared his joy at the Grundys finally getting back to Grange Farm.

As fans queued afterwards for photo opportunities, the delight was palpable.  One local, making a strange bobbing motion as she held out her pen for a Grundy autograph, seemed almost unsteady on her feet. She’d just stopped herself from dropping a curtsey! 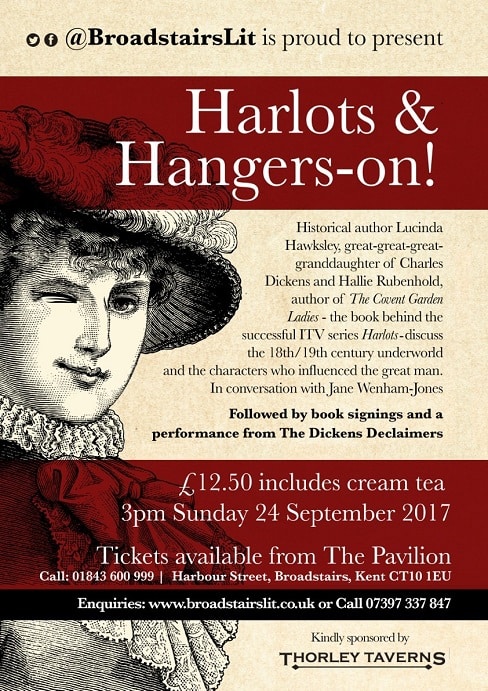 The next event on our calendar is 24th September: a cream tea with Hallie Rubenhold – the power behind the ITV series Harlots – and Lucinda Hawksley, great great great-granddaughter of Charles Dickens himself. They will be talking about Harris’s List, the 18th/19th century underworld and those who influenced the great man. Hear Denise talking about them here.

Excitements for the future include Sir Tony Robinson of Baldrick fame on 10th March 2018, and top authors Katie Fforde and Peter James when we’ve all coordinated our diaries. Keep an eye on www.broadstairslit.co.uk and watch this space….