A final series of workshops to allow people to explore the finds from an international excavation of a Dutch merchant shipwreck take place this month (September).

The Rooswijk 1740 Project, run by the Cultural Heritage Agency of the Netherlands and Historic England, is an archaeological endeavour to research, excavate and map Dutch East Indian ship the Rooswijk which sunk off the Goodwin Sands in 1740.

The entire crew died and the wreck now lies 24 metres depth at sea.

A dive team that worked on the site in 2005 gathered information and lifted the silver and gold coins and silver ingots that were its cargo.

Historic England designated the wreck site in 2007 under the Protection of Wrecks Act 1973.

The wreck site is now under threat of erosion of the seabed and is classed as ‘high risk’ on the Heritage at Risk register due to its exposed remains and vulnerability.

A further dive to secure the wreck, consisting of archaeologists from the Cultural Heritage Agency (RCE), Historic England, the former dive team working on the site in 2005, Wessex Archaeology (the contractor for Historic England) and MSDS Marine, the dive contractor, took place last Autumn.

In July an international team of maritime archaeologists returned, diving, excavating and recording the protected wreck.

The team excavated the storage rooms and living quarters in the stern of the ship. They recovered more than 90 items, including two large seaman’s chests, pewter jugs and spoons, glass bottles, a copper alloy oil lamp and personal items such as leather shoes. The items were brought to shore at Ramsgate for conservation work and for the items fully recorded.

Finds were then taken to a Historic England storage facility where work to assess, analyse and conserve them is taking place. The finds will be returned to The Netherlands and in future some material may be made available for display in Ramsgate.

Martijn Manders, Project Leader of the Rooswijk Excavation and Maritime Heritage Programme Manager at the Cultural Heritage Agency of the Netherlands, said: “The Goodwin Sands has been a treacherous place for ships throughout the centuries and is now a treasure trove for archaeologists. It is also popular with sports divers. The rapidly shifting sands mean that the site is even more exposed now than it was during our initial dives to assess the condition of the Rooswijk last year. This makes the excavation urgent. 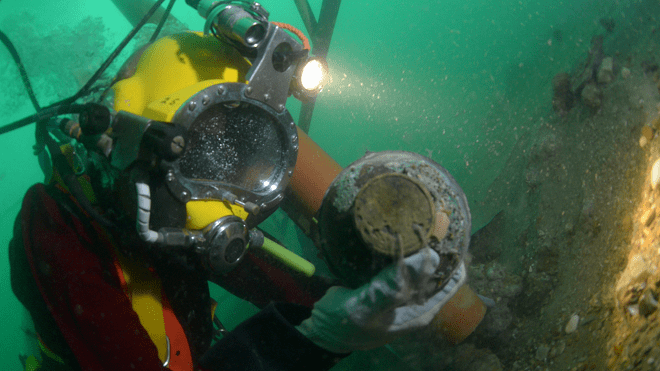 “We are excited about this project because the Rooswijk is a showcase of modern underwater archaeology in which cooperation is essential. It provides unique opportunities for young professionals and the public to participate and is a project through which we can learn about our shared past and who we are.”

The ship’s remains are owned by the Dutch Government and managed by Historic England on behalf of the Department for Digital, Culture, Media and Sport. The #Rooswijk1740 project is led and financed by the Cultural Heritage Agency of the Netherlands, as part of the Dutch Ministry of Education, Culture and Science.

Last chance to get involved with the Rooswijk project

The events will be held in the Port of Ramsgate and people do not need prior knowledge or experience, just interest and enthusiasm!

Ever wanted to be an underwater archaeologist? On this full day course, you will get a taster of maritime archaeology including doing some practical fieldwork (without getting wet!) using finds recently raised from the Rooswijk shipwreck.

Seen those fancy 3D models and wondered how they were created? During this full day course, you will learn about the digital recording techniques of Photogrammetry and Structured Light Scanning through live demonstrations using finds raised from the Rooswijkshipwreck.

Come and see the Rooswijk wreck finds that will have just been raised from the seabed. Talk to the Conservation Lab staff and see how they are stabilising the finds so they don’t fall apart. Learn what the finds can tell us about the wreck and what the archaeologists think this might mean.

How to take part

All events require  booking, even the free open days. The courses and other public events are financed by the #Rooswijk1740 project but a small fee is required to cover administrative fees and NAS membership costs.

Contact the NAS to book your place on one or more of these events 023 92818419  or email education@nauticalarchaeologysociety.org.